The restaurant at the Israel Museum serves elegant food in artistic surroundings. 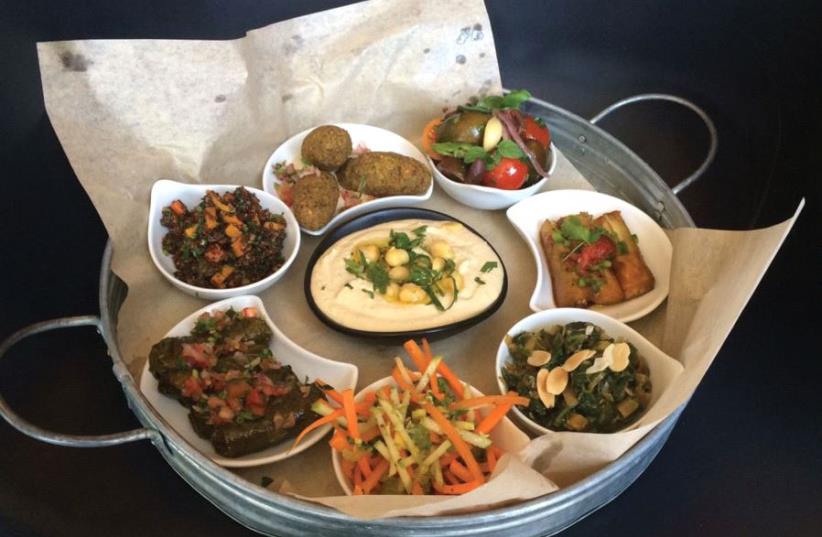 Modern restaurant at Israel Museum
(photo credit: PR)
Advertisement
Modern is a casual restaurant that serves elegant kosher food in Jerusalem’s Israel Museum. And it fits well into its surroundings.Walk through the turnstiles and metal detector at the museum’s entrance, cross through the area where the tickets are sold and past a small cafeteria, and you will come upon Modern. Step inside. Look at the walls. It’s as if you were standing in front of a Piet Mondrian painting.You know Mondrian – the Dutch painter. He of the grid paintings of primary colors, bisected by thick, black horizontal lines. Modern’s decor reflects the Modernism movement (hence the name) – from the way the walls are painted in cubes of red and white, to the Eames chairs you sit in. The food, however, does not. The food on the restaurant’s new winter menu is Jerusalem eclectic.My dining companion and I started our lunch on a busy Thursday afternoon, as all the diners do, with a small taste of lentil soup with croutons. This is brought to the table before the menu – a nice touch that sets the restaurant apart. It sends a message to your brain that while there are no tablecloths on the table and the cutlery sits in a little container in the center, this is a restaurant that strives to be something different – that is, adorned with a touch of class.After finishing the bit of soup, we ordered the tapas platter for two (NIS 110). Not cheap, but a good variety that included some familiar dishes – such as stuffed vine leaves and tabouleh – and others that were more unique, such as grilled eggplant with onion and sumac served on grilled pita. The French bread was served with an eggplant dip that included tiny specks of the eggplant peel, which gave it a unique flavor.The hummus was the tapas highlight, especially good and creamy. At the other end of the spectrum was the tabouleh, which could have tasted fresher.For the main course, my companion – not a meat eater – opted for the sea bream chreimeh (NIS 95) with halla. Served piping hot in a metal dish on a wooden server, the fish sat amid tomato sauce that was spicy – but not uncomfortably so – and crispy chick peas. The bream was tender, and it was a delight soaking up the full taste of the sauce by wiping it off the dish with the halla.I ordered the Jerusalem artichoke and chestnut sofrito (NIS 84), a long-cooked stew made with potatoes, chestnuts and Jerusalem artichoke. The dish conjured up Shabbat cholent, though the Jerusalem artichoke and chestnuts set it apart from the traditional Shabbat fare. In the past I have ordered the apricot kebab at this restaurant, a better choice since it has a unique taste that brings the otherwise familiar kebab to a different level.Both the sofrito and the chreimeh were served in plentiful amounts, befitting Jerusalem cuisine. And, as Zafrir Ginsburg, the proprietor of the restaurant explained, there is a real difference between restaurants in Tel Aviv and Jerusalem. And Ginsburg knows, as he lives in Herzliya and has run restaurants in Tel Aviv.First of all, he said, in Tel Aviv the diners – who are more health conscious – want their meals without carbohydrates, while in Jerusalem a meal without some starch is, well, not a meal.Secondly, the portions in Jerusalem are significantly larger. While the Tel Aviv diner is accustomed to the artistic plate – good presentation, small portions – the Jerusalemite restaurant-goer also appreciates artful presentation but wants it in generous amounts. Both my portion and that of my companion were so generous that neither of us could finish them.And the final difference, Ginsburg said, is the price. The price of an average meal in an upscale restaurant in Tel Aviv is some 25% higher than in a comparable restaurant in Jerusalem. Which, considering that the portions there are smaller, means that in Tel Aviv restaurants, you are simply paying more for less.After this eye-opening discussion with Ginzburg, and unable to finish our meal, my companion and I decided that instead of each of us ordering a dessert, we would split one. We opted for apples and cardamom kadaif, served hot with vanilla ice cream. At NIS 38, it is not inexpensive but a good choice. Although the ice cream was only as good as parve ice cream can be, the kadaif was a nice, light finish to a truly satisfying meal.The writer was a guest of the restaurant.Modern
Kosher
Israel Museum, Jerusalem
Tel: (02) 648-0862