Craving some homemade Mexican food in Tel Aviv? Mexicana is a delightful option in the heart of the city. 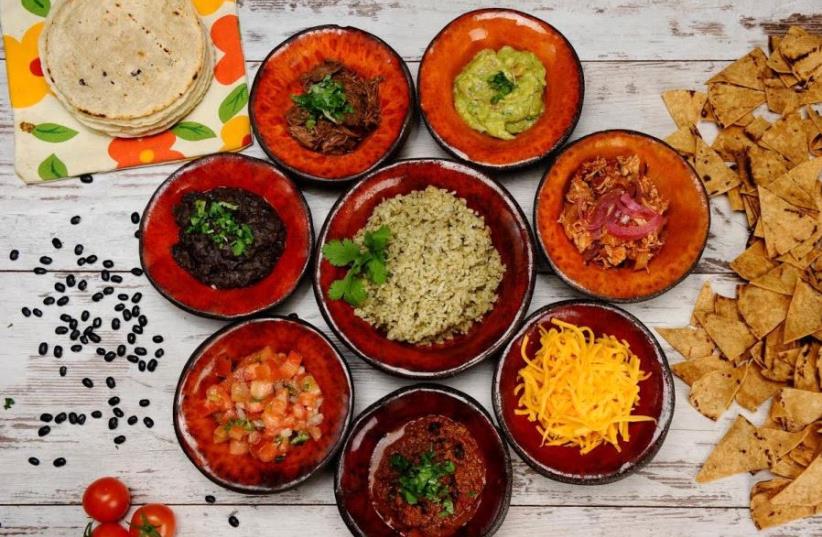 A tasting meal at Mexicana
(photo credit: Courtesy)
Advertisement
I am generally very skeptical about Mexican restaurants in Tel Aviv because while the flavors are often great, most places seem to fall flat in terms of, well, everything else. Too often, I find that the food is just heavy, greasy, and mushy. Well, not at Mexicana. Mexicana is the oldest Mexican restaurant in Tel Aviv having been open for 10 years. And that is why you won’t find another Mexican eatery in the Ben Yehuda/Bograshov area that’s as tasteful, as clean and as welcoming as this place.  With mostly indoor seating and a little outside area, the restaurant is small but full of warmth and animation. As soon as I sat down, I felt at home.We ordered some special house margaritas, which came frozen. Usually frozen margaritas are the weak sibling of a margarita on the rocks, but not at Mexicana. These liquid, semi-frozen treasures will knock you firmly on your derriere. We tried the strawberry and coconut frozen margaritas. Not too sweet or too sour, they tasted reasonably alcoholic (sometimes I get margaritas that taste like someone forgot to put in the tequila, and that’s annoying). Most importantly, the drinks were the perfect complement for the food.We began with the sopa de tortilla (NIS 39), a traditional Mexican soup with chicken, vegetables and crispy strips of corn tortilla. The broth was aromatic and tasted like the perfect mix of spices. You’re given a plate of avocado slices and cheddar cheese on the side which you mix in. I was a little skeptical because I wasn’t sure how well the avocado would taste but it’s the most comforting soup (I’ll probably be ordering this if I’m sick in the future) and just makes you feel so warm and satisfied.This was followed by the chilaquiles (NIS 45). Chilaquiles are fresh fried tortilla chips, simmered in either green or red sauce, then topped with cheddar, avocado, pickled jalapeno, sour cream, avocado salsa and a fried egg. I love anything that gives me different textures with every bite of food. Also most of the tortilla chips maintained their crunchiness even with all the damp flavorful ingredients dumped on top of them.After a bit of a breather and complimentary shots of Cuervo tequila, we were presented with the Dos Mexicanos (NIS 179), a Mexican tasting meal for two. This mammoth dish comes with three different types of meat: the barbacoa – slow cooked shredded beef; chili con carne and Pollo Tinga – shredded chicken with chipotle chili and tomatoes. Three types of salsa: pica de galo, guacamole and blanca. A whole bunch of side dishes including rice with lime and coriander, cheddar cheese, hot black beans, wheat flour tortillas and corn tortillas. Now the fun begins as you’ve got a mix and match extravaganza. Out of all the meats, I found the chili con carne to be the most flavorful. It was rich, warming and comforting. The Pollo Tinga was a nice blend of sweet and spicy flavors, and the chicken was cooked to perfection. However both my dining partner and I found the shredded bit to be a bit too salty. After another breather and some shots of a delectable Patron coffee tequila, it was on to dessert, which consisted of the churros (NIS 35). The churros were crisp and fried to perfection and lightly coated in sugar. The accompanying chocolate dipping sauce was really rich and complemented the churros very well.