Upstairs and on top 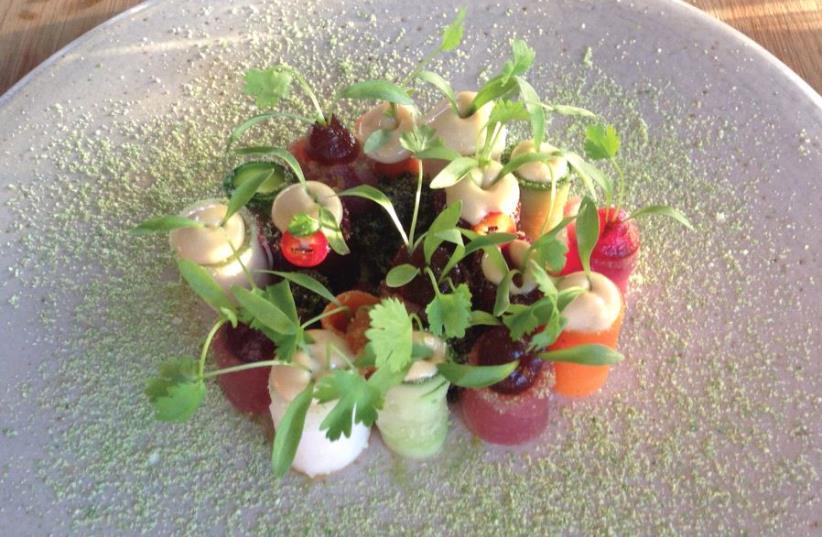 Kitchen Market
(photo credit: PR)
Advertisement
The Sucre Group is the creative and business entity that owns and operates three of Israel’s elite restaurants: Kitchen Market and Mashya in Tel Aviv, and Onza in Jaffa. The culinary genius behind the trio of eateries is chef Yossi Shitrit, who has been at the helm of Kitchen Market – located on the second floor above Shuk Hanamal, the Farmer’s Market in the Tel Aviv Port – for five years.The proximity of Kitchen Market to the fresh produce delivered daily to the market below serves as the inspiration for Shitrit’s acclaimed cuisine. It also means that variety is a watchword of the restaurant, which selects only the freshest ingredients from its suppliers each day to serve as the raw material for its seasonal menu, which – thanks also to the infusion of daily specials – never gets tired.The décor of the restaurant is informal, even quasi-industrial, with an open kitchen. Its best feature is the view looking out over the Mediterranean.Kitchen Market offers five specialty cocktails, from which we chose two with Latin American flair: the Cubano Bitter (NIS 46) and the Pisco Spring (NIS 42). The former – a blend of rum, Martini Rosso, lemon, honey, orange and angostura, garnished with a cinnamon stick – had a smooth finish, with an aftertaste that lived up to its name. The latter – Peru’s national liquor with St. Germain and lemon, garnished with mint and cucumber – was tart and refreshing.The menu comprised appetizers, main courses and intermediate dishes that could be either. The list of daily specials also encompassed appetizers and main courses.Even as we perused the menu, the kitchen sent out their choice of appetizer for us – the fresh tuna (NIS 59): red tuna sashimi and razor-thin slices of assorted vegetables wrapped around columns of soy gel and Asian aioli, subtly drizzled with yuzu vinaigrette. As finishing touches, sprouts of micro coriander were planted in the center of each column, the columns were arranged around a mound of delicate black sesame foam, and a sprinkling of green wasabi powder covered the plate. The visual effect was of an enchanted miniature forest, with fish and vegetable tree trunks, micro coriander branches, black sesame foam soil, and wasabi powder grass. The only thing more impressive than the presentation was the taste of the dish, with its exquisite interplay of flavors.Our own choice of appetizer was the St. Jacques (NIS 64) – seared scallops with lentil salad, curry, cashew, sweet potato and ginger. The chewy, flavorful scallops were cooked perfectly, while the combination of fresh seafood with the other ingredients infused with gentle heat was truly inspired.Our first main course was a daily special: duck sous vide, served with wheat salad, orange cream, beetroot cream, dates and shallots (NIS 106). The vacuum method of cooking yielded poultry that was juicy and succulent. It was probably the best duck I have had in Israel.The veal fillet, our second main course, was a very substantial cut of premium meat (NIS 142/188), with a crusty exterior and reddish-pink center. All too often, what is labeled veal fillet tastes too much like beef; but Kitchen Market’s expertly grilled version was the epitome of what a veal steak should be.The veal was accompanied by a disc of grilled kohlrabi, a dollop of sweet potato purée, and a side of buttery, fluffy mashed potatoes.The dessert menu also contained a mix of permanent fixtures and occasional specials. Our waitress recommended the cheesecake (NIS 44), which she said was the restaurant’s best seller. Certainly, the ingredients were intriguing, and the presentation no less so: vanilla cream cheese studded with grapes and pecans, buried beneath a layer of black olive sablé, itself topped with a scoop of white cheese sorbet. The slight hint of saltiness in the grainy olive sand was a nice counterpoint to the rich, sweet – and ultimately memorable – cheesecake.Throughout the meal, the service was impeccable. Although the regular menu is enough to cement Kitchen Market’s stellar reputation, the chef and management continue to innovate: a vegan tasting menu is being introduced on Sunday evenings (alongside the usual dishes); and diners may order a unique tasting menu any night of the week by giving the restaurant 24 hours’ advance notice.The writer was a guest of the restaurant.Kitchen Market
Not kosher
Hangar 12, Tel Aviv Port
Tel: (03) 544-6669