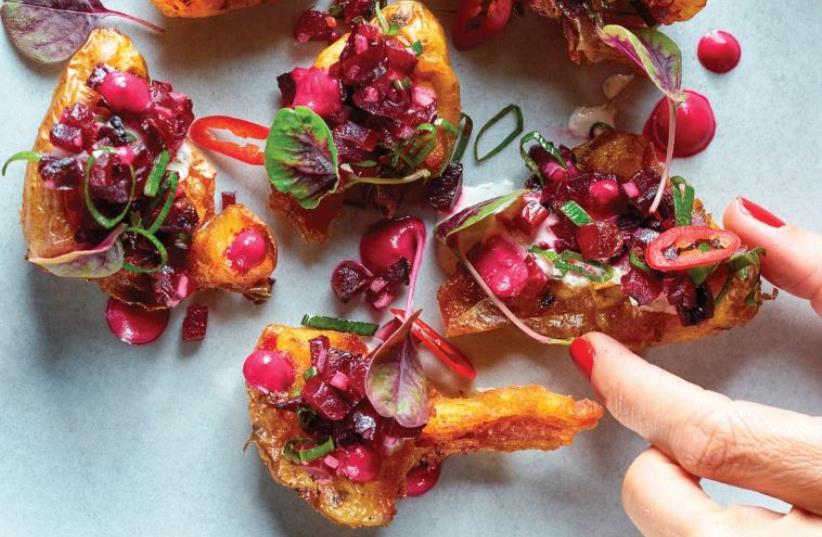 Miss Kaplan
(photo credit: PR)
Advertisement
The story of vegan restaurant Miss Kaplan starts with the story of Ori Shavit, a food journalist who underwent a transformation and not only became a vegan herself but has become an evangelist for veganism in Israel, which now has the world’s largest vegan population per capita – reportedly five percent of the country’s population. As part of her outreach campaign, Shavit has launched the organization Vegans on Top and opened Miss Kaplan, dedicated to the proposition that vegan food can be as tasty and popular to the restaurant-going public as any other cuisine.If Shavit’s mission is to make the food so good that no one would feel it is a sacrifice to be vegan, I was eager to put Miss Kaplan to the test. The restaurant is situated on the edge of the Sarona Market complex, on the second floor of an old Templer building. There is no elevator, but there are two al fresco tables downstairs. Indoors, it is a small, cozy place, with the original tile floors and a funky vibe, thanks to Shavit’s decision to leave the walls in their chipped and peeling condition. A tree right outside the window and hanging plants inside impart a touch of nature.The atmosphere may appear informal, but the wait staff is very professional. The waitresses are knowledgeable, even dispensing tips on how to eat each dish. The new English menus were at the printer’s when I was there, but it exists online. Dishes are itemized in two categories – cold and hot. Dishes that are available gluten-free are marked “GF.”A complimentary snack of fried garbanzo beans was served upon seating. Perfectly seasoned, the little morsels were addictive.Clearly, alcohol is an approved vegan ingredient. There were six rather elaborate specialty cocktails. The waitress recommended the Green Detox Smash (NIS 48) as a drink that goes well with food. This blend of gin, celery-apple syrup, Kaffir lime leaves, lemongrass and lime, garnished with a sprig of mint, was very refreshing, with a little bite.Also excellent was the more complex Jamaican Delight (NIS 48) – tequila infused with fresh curry leaves, Jamaican spices, mango, Aperol, habanero extract and fresh lime. Served in a salt-rimmed glass, the cocktail had a fresh aftertaste.As I waited for my first course, I sampled the house bread (NIS 14). The thick slices of crusty, soft, spelt bread were accompanied by a carrot jam seasoned with cilantro seeds and white balsamic vinegar. The jam was lip-smacking, leaving a pleasant tingle of heat in the mouth.The potato carpaccio (NIS 42) was thinly sliced squares of potato loaded with baby fennel confit, Tassos olives, herbs and watercress in a sherry aioli. The mellow fennel with the salty olives topped with crispy discs of fried potato delivered a wonderful interplay of flavors and textures. The dish was garnished with slices of fiery red chili pepper, but the aioli containing Dijon mustard really packed a punch.The smoked carrot sausage (NIS 48) may be Miss Kaplan’s signature dish. Carrots were brushed liberally with Jack Daniels bourbon and applewood-smoked to the consistency of a sausage. The dish may consist of one carrot the thickness of a bratwurst or two carrots resembling frankfurters, served on a steamed bun with lettuce and pickled onion. The whiskey and smoking process imparted a flavor that evoked barbecue. Given what passes as fast food hot dog in this country, I would take this magnificent version every time.The smoked beet (NIS 48) may be named after the dominant ingredient, but the main ingredient in terms of quantity were the crispy wedges of fried fingerling potatoes upon which were piled small mounds of miniature cubes of smoked beet. Another interesting role was played by dollops of an exotic espresso aioli, along with dabs of beet ketchup. This dish was as delicious as it was inventive.Another creative dish was the Kabocha squash, aka Japanese pumpkin (NIS 68). Large slices of caramelized squash atop a puree of pumpkin and shallots surrounded water spinach cooked in a sauce of chili, ginger and lemongrass. The flavorful green vegetable and the sweet candied pumpkin, both sprinkled with ginger dust, may be enjoyed separately or together.Only two desserts were available, although I was told more are coming. The espresso banana bread (NIS 39) – a small piece of cake on a chocolate espresso sauce, along with cubes of fresh banana and cocoa crumble – was a nice finale to a memorable meal.There was not a moment during the meal where I felt anything was lacking because of the restrictions of veganism. On the contrary, I was feeling downright virtuous throughout. If Miss Shavit founded Miss Kaplan to prove that being vegan is not necessarily a sacrifice, then I can only say: Mission accomplished.The writer was a guest of the restaurant.Miss Kaplan Vegan (no kashrut certification) 18 Eliezer Kaplan St., Tel Aviv Tel: (03) 697-9015.