Whisper down the lane

‘Broken Telephone’ is a multidisciplinary performance that brings 20 artists together in a chain of consciousness and creation. 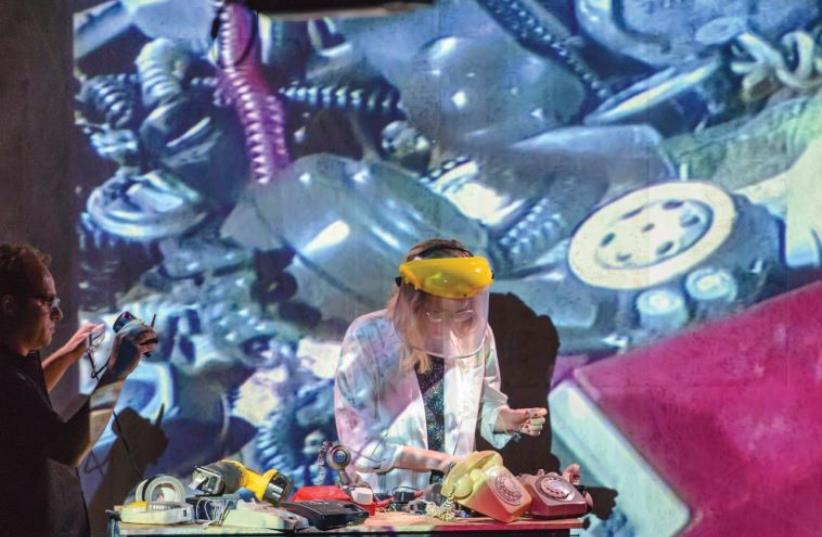 A SCENE from the multidisciplinary performance ‘Broken Telephone.’
(photo credit: URI RUBINSTEIN)
Advertisement
As kids, entertainment meant sitting in a circle, whispering words or phrases into one another’s ears and waiting to see what distorted version of the message would make it through the group. Sitting cross-legged in a circle, “pleased to meet you” easily and to much laughter turned into “cheese pizza.” The simple yet intriguing idea behind this childhood game was the basis for Broken Telephone, a multidisciplinary initiative that brings artists together in a chain of consciousness and creation.Broken Telephone, an experiment whose fruits have made it to the stage once before, will return to Tzavta Theater Wednesday night.Developed by Yael Shinkar, Broken Telephone is a new format in which artists from various disciplines participate in a progression of creations that draw on and influence one another.The first round of Broken Telephone took place in June 2015 and included 20 artists.Shinkar opened a Headstart account to fund her vision. After several weeks of whispering ideas to one another, the group presented an evening to a live audience. Now, thanks to support from the National Lottery as well as the Rabinovich Foundation, Shinkar will present the evening once more.One of the artists Shinkar approached is dancer and choreographer Takanori Kawaharada.Born and raised in Kumamoto, Japan, Kawaharada, 33, was busy studying chemistry when his life took an unexpected turn.“I never danced in Japan,” explains Kawaharada over the phone. “An Israeli theater company, Clipa, came to my home town and showed work. The performance really moved me. I just jumped over to Israel to see what was going on here.”Though dance was new to him, Kawaharada had a strong physical discipline from years of practicing Kendo, a Japanese martial art.“Kendo really prepared me for dancing,” he says.In Israel, Kawaharada worked with Clipa for several years before heading back to his home country. Only, once he arrived, he realized that the time here had altered him in significant ways.“I performed in Tokyo and in Yokohama. I studied Butoh. But in Tokyo, I felt like I’m a foreigner, after living in Israel for five years. Israel is very different from where I grew up. Israel opened my heart to people. Japan is very polite but closed, you can’t really open your heart to people you meet on the street. Here I feel more open. It changed my personality.”Since returning, Kawaharada has opted to forgo the comforts of company life in favor of independence. He has been seen in works by choreographers Maya Levy, Ofra Idel and Or Marin. He has presented his own creations in various theaters in Tel Aviv and is the initiator of the Japan Day festivities at the Suzanne Dellal Center.“I produce this event together with Yair Vardi in order to give Japanese people living in Israel an opportunity to perform,” he explains.As part of the Broken Telephone gang, Kawaharada was given two weeks and a song by Noam Helfer.“I was given Noam’s song but I didn’t know who he was because all of the ‘whispers’ were anonymous. The song had lyrics in Hebrew. I translated words with the dictionary. I created movements from the words and created a solo based on his music. It was very interesting because I didn’t know who is this artist, who wrote these words.”Once he finished his part, Kawaharada passed on his video, which was relayed to spoken- word artist Arik Eber.“He got my material. He made a poem from my movement. We decided to perform the three of us together. Noam is a DJ but he plays live instruments, I’m dancing and Arik is reading the poem.”Other artists to perform include Gilad Kahana, Artour Astman, Daniel Landau and Nataly Zukerman.Broken Telephone will take place at the Tzavta Theater Wednesday, February 10 at 7:30 p.m.and 9:30 p.m. For more information, visit www.tzavta.co.il.