Ir David: Panel member had conflict of interest in ruling 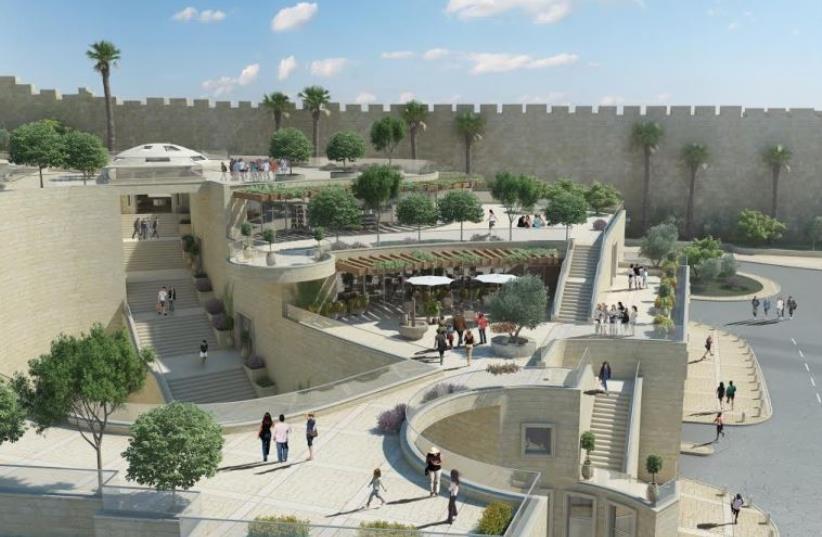 An artist's rendering of the Kedem Center.
(photo credit: CITY OF DAVID)
Advertisement
One week after the National Building and Planning Committee ordered the Ir David Foundation to reduce the size of its planned Kedem Center in Silwan, the right-wing NGO on Monday said that a member of the committee had previously signed a petition condemning the foundation’s excavations in east Jerusalem.According to Ir David Foundation (Elad) director of international affairs Ze’ev Orenstein, the restrictive ruling – which passed by a single vote – was approved by Yaron Turel, an architect who supported the British organization Architects and Planners for Justice in Palestine.The petition in question, sent from the left-wing group and signed by Turel in February of 2011, sought to name the Palestinian village of Lifta, located outside of Jerusalem, a UNESCO Heritage Site.In it, signees also condemn archeological excavations and construction in Silwan sponsored by the foundation, which operates the City of David National Park. This constitutes an inherent conflict of interest in the June 8 vote on the Kedem Center, says Orenstein.“…These projects involve deep injustices to the Palestinians (either citizens of Israel or in the occupied territories) [and] are contrary to international law and the Geneva Conventions, but more importantly are against professional ethics,” the petition read, in part.On Monday, Orenstein contended that Turel’s signature should have excluded him from voting on the contested visitor’s compound, to be operated over the Givati Parking Lot in Jerusalem’s Silwan neighborhood, opposite the Old City’s walls.“Respecting the objectivity of the rule of law, one cannot help but be concerned by this blatant conflict of interest on the part of one of the committee members,” said Orenstein.“It was incumbent upon Yaron Turel – having previously signed a public declaration on behalf of a radical left-wing organization stating his opposition to Israel’s sovereignty over a united Jerusalem, and having specifically equated building projects in the vicinity of the City of David and eastern Jerusalem as being in violation of international law – to recuse himself from these proceedings.”Orenstein continued: “Given that the committee’s decision to limit the scope of the Kedem Center passed by only a single vote, this situation is all the more troubling.”On June 8, the committee approved, but ordered a scaled-down version of, the proposed center, after reviewing a petition against it from the left-wing NGOs Ir Amim and Emek Shaveh demanding that the project be scrapped.In their January petition, the European-funded organizations claimed the center would result in “destruction and damage to the fabric of ancient Jerusalem” by harming relics located under the building while contributing to the “Judaization” of east Jerusalem.Meanwhile, Elad – which intends for the structure to serve as the entryway for visitors to the Jerusalem Walls National Park, including the City of David, Mount Zion and Ophel and Hulda Gates – said the center will strengthen the capital by celebrating its shared history.“The committee’s determination, under these circumstances, represents a blow not only to the objectivity of the rule of law but to the millions of people, of all faiths and backgrounds, who have [visited] and who continue to visit the City of David and its environs, seeking to connect with the history of ancient Jerusalem,” Orenstein said.“The Elad Foundation will consider its next steps accordingly,” he added.