"The big money comes during Shabbat, so I’m losing everything," says store owner. 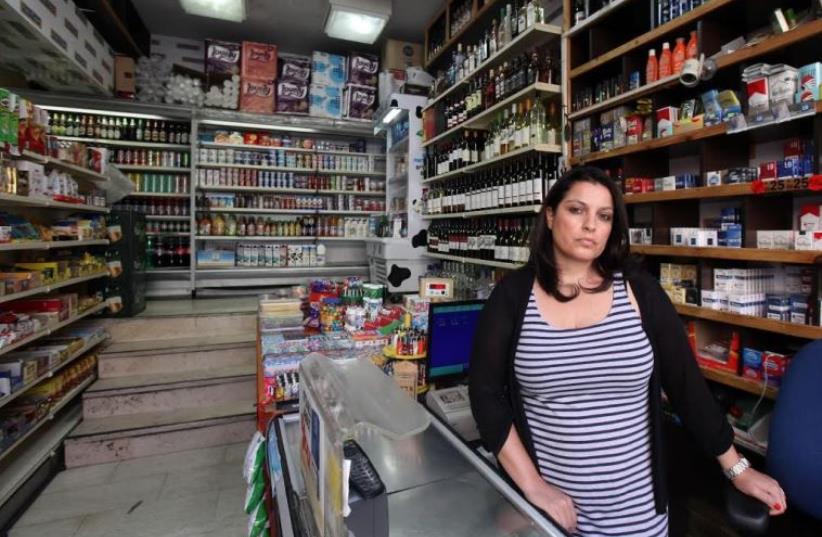 AN EMPLOYEE of the Makolet 24-hour market on Hillel Street, one of the eight markets being forced by the Jerusalem Municipality to close during Shabbat next month
(photo credit: MARC ISRAEL SELLEM)
Advertisement
The owners of eight 24-hour Jerusalem minimarkets that the municipality is forcing to close on Shabbat are planning a large-scale protest on Thursday, claiming that the impending measure will be financially ruinous for them.Last week, in an apparent quid pro quo to appease Jerusalem’s sizable haredi community – which has violently protested the Shabbat operation of the new Yes Planet multiplex – Mayor Nir Barkat ordered the eight downtown markets to cease Shabbat operations as of September 5.However, the municipality’s legal adviser is allowing minimarkets in the Ein Kerem, Talpiot and Atarot neighborhoods and in the southwestern portions of the city to remain open, since the haredi populations in those areas are smaller and protests are less likely.Municipal bylaws enacted many years ago mandating that Jerusalem businesses close for Shabbat do not apply to leisure-oriented businesses such as restaurants, cafes and cinemas, although most remain closed on Shabbat anyway.On announcing the mandate last week, city councilman Hanan Rubin, whose Hitorerut Party is a member of Barkat’s coalition, claimed the mayor was offering the Shabbat closures to placate the capital’s powerful haredi parties.“The haredim are extorting him over the issue of Yes Planet, so that they can have a victory to show... on one of these Shabbat issues,” he said.The owners and employees of four of the downtown markets in question said Wednesday that they would likely be forced to shutter their once-thriving businesses permanently, since up to half of their gross annual income came from Shabbat sales.“The big money comes during Shabbat, so I’m losing everything,” said Ronny Cohen, 43, who has owned the Makolet 24-hour market on Hillel Street for 10 years.According to Cohen, who will be attending Thursday’s 5:30 p.m. Safra Square protest, his Shabbat earnings average NIS 50,000, versus an average of NIS 10,000 during the week.He said he squarely blamed Jerusalem Mayor Nir Barkat for the unwanted edict.“No one should ever again vote for Mayor Barkat,” he said.Across the street, the owner of a competing 24-hour minimarket that is also being forced to close on Shabbat echoed Cohen’s sentiments.Guy, 37, who requested that his last name not be published, said the pending measures have put him in an untenable position financially.“If I have to close on Shabbat, I have to close the business,” he said. “It’s not worth staying if it’s closed during Shabbat, because that’s when I make most of my money.”Estimating that he earns between NIS 60,000-NIS 70,000 a month on Shabbat alone, Guy said he would lose roughly onethird of his annual income.Still, he said, he has not lost all hope, and has retained a lawyer to file a lawsuit against the municipality for selective enforcement of the closures.“I’m sure that we will win, because the municipality’s case is weak,” he said. “They can’t win, because it says that all [markets] must be closed during Shabbat, and Barkat’s keeping all the markets on King David Street and Derech Hebron open.No haredim live near here, so I can’t understand what got in his head when he made this decision.”David Cohen, 32, who took over the nearby Super 24 Market on Shamai Street from his father a few years ago, said the family- owned market was the first in downtown Jerusalem to stay open on Shabbat 20 years ago, during former mayor Teddy Kollek’s tenure.Facing imminent bankruptcy now, he said he may have no choice but to close permanently.“I’m thinking about closing my store, because 50 percent of our weekly earnings are on Shabbat,” he said. “And, of course, all of our customers who come on Shabbat are going to go to Derech Hebron stores instead of ours.”He said the municipality’s selective enforcement was what troubled him most.“That’s the big problem,” he said. “Why can they stay open and we can’t? If they say all the markets will be closed, then that’s fair, but only closing eight stores in the center of the city that give service to all the tourists and university students is not fair.”Instead of acquiescing to Barkat’s edict, David Cohen said he would remain open on Shabbat, risking prohibitive fines.“I’m not going to close; I’ll take the fine,” he said. “The question is how often they issue fines. If it’s every two hours, then I can’t do it, and of course, I’ll have to close.”Moreover, he said he would seriously consider permanently leaving Jerusalem.“As a young person who lives in Jerusalem, and not just the owner of a store, Barkat’s decision is making me leave this town, and my friends are also talking about it,” he said.“[The mayor] says he wants young people in Jerusalem and to make this city desirable for young people, and what he’s doing is the exact opposite.”Indeed, Ariel Baydel, 23, a cashier at the relatively new Marlek 24-hour market off Jaffa Road, said the closure would likely result in him being laid off, leaving him few other options than to leave the city.“Eventually people will stop living in Jerusalem,” he said.“We have a lot of tourists and young people here on weekends who buy snacks, and they won’t have any place to go, so they’ll either go to Tel Aviv on the weekends, or move there. The other guy who works here said he is thinking about moving to Tel Aviv.”In terms of offending haredim, Baydel said it has never been an issue.“We’ve never had problems with religious guys here,” he said. “The nearest haredi neighborhood is over 1 kilometer away. It’s just not fair.”Baydel added that he believed the measure was an ominous sign for the city.“It starts with the supermarkets, and then the rest of the city will slowly become a ghost town,” he said. “Nothing will be open in the end.”“This is the start of a downward spiral,” Baydel predicted. “I think it’s ridiculous.”I think it’s ridiculous.”