Being a global citizen means “being engaged in more and more collaborative forms of relationships, partnerships, and looking not just at the transactional bottom line, but also at the social good." 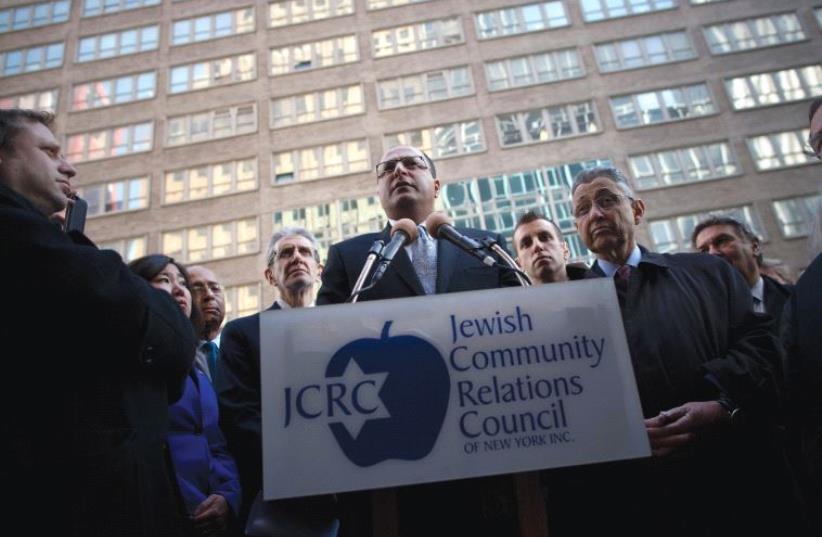 FORMER CONSUL-GENERAL Ido Aharoni speaks at a press conference of city officials in support of Israel, outside the Israeli Consulate in New York in 2012
(photo credit: Courtesy)
Advertisement

“We live in an age of information overload,” says Professor Ido Aharoni. “The human brain was never designed to handle so many stimulations simultaneously.” Aharoni, who is driving on the highway throughout our Zoom conversation, is seemingly immune to this phenomenon and can speak and drive at the same time.

Perhaps Aharoni’s ability to multi-task stems from spending twenty-five years as a member of Israel’s Foreign Service, serving as Israel’s Consul-General in New York and the tri-state area from 2010-2016. Aharoni spent fourteen years as an Israeli diplomat in the United States. Today, he is Global Distinguished Professor for International Relations at New York University’s Graduate School of Arts and Science. A graduate of Tel Aviv University, Aharoni is a member of the institution’s Board of Governors and is a guest lecturer at the university during the summer.

Because humans cannot handle information overload, he suggests, people crave simple solutions in the face of increasing complexity, which in his view, accounts for the increasing strength of authoritarian regimes and populist leaders. Lockdowns during the COVID pandemic, he says, are another example of a simple answer to a highly complex problem. Aharoni opines that the pandemic caused massive trauma on a global scale, “perhaps even greater than World War II because it corresponded with the deepest, most intimate fears of every human being on the face of this earth.”

TAUi will be hosting a live webinar, on November 14 at 4:30 p.m. IST, where you can hear from leaders in academia, bio-tech and international diplomacy and learn how you, too, can become a member of the global community. Click here to register.

Yet, just as the world recovered from World War II by creating the United Nations, a collaborative organization, so too, says Aharoni, the world of 2022 and beyond will recover through increased global solidarity. Aharoni states that this tilt towards cooperation can already be seen in how companies are looking for ways to make a more meaningful difference in people’s lives. “We’re seeing a shift from ‘for profit’ to ‘for purpose,’” says Ido.

The increasing level of global cooperation, he says, can be seen in the development of the COVID vaccine itself, which was accelerated by the work of over 130 different teams collaborating around the world. “The scientific achievement is a global achievement,” he points out.

Being a truly global citizen in Ido’s view means “being engaged in more and more collaborative forms of relationships, partnerships, and looking not just at the transactional bottom line, but also at the social good bottom line.”

Aharoni recalls that when he entered the Foreign Service, globalization had an entirely different meaning, “In those days,” he explains, “globalization meant the transfer of goods, ideas, currency and human resources across border. Along came hyperconnectivity and created a situation where if you’re a dentist and live in Raanana, you have a lot more in common with a fellow dentist who lives in Sydney, Australia, than your next-door neighbor who is interested in something entirely different. Communities are cross-border by definition. If you run a marathon and you’re in touch with other marathoners all over the world, then by definition, it’s a cross-border community. And that’s going to be the future.”

Tel Aviv University’s International Program, says Aharoni, is exceptionally capable in developing the global and cooperative skills for the future of which he speaks. First, its location in Tel Aviv, Israel’s most cosmopolitan city, provides a broad-based vantage point to see the world. In that way, says Aharoni, it resembles New York University, the most cosmopolitan American university located in the most cosmopolitan American city.  Aharoni is very familiar with life in the US and worked and studied in the country for a total of twenty-two years since the 1980s.

“Tel Aviv University is a major asset of the Tel Aviv brand,” explains Ido. “What makes Brand Tel Aviv unique is that, unlike many other Israeli locations, it is all about the future. Israelis have a tendency to obsess about the past. But Brand Tel Aviv is forward-looking, inclusive, energetic, vibrant, bubbly, non-stop, relevant and young. Tel Aviv University is being viewed by many all over the world as the embodiment of these highly attractive brand attributes. In that respect, the relationship between TAU and TLV is very similar to the healthy connection between NYU and NYC.”

Second, says Aharoni, the educational programs at Tel Aviv University are designed to be interdisciplinary and multidisciplinary. “I teach during the summer session, he explains, and I have had the pleasure of interacting with Palestinian, Chinese, Mexican, American, Canadian, French, Japanese, Greek and British students, and they call come to study together. That’s a wonderful concept. Because it is widely known for its inclusive nature and a high degree of tolerance, Tel Aviv University is very attractive to students from all over the world. The campus is as international and cosmopolitan as can be, with an abundance of courses offered in English and departments that are globally renowned, such as the Tisch School of Film & TV and the Coller School of Management.”

Beyond the university’s environs, examples of worldwide cooperation involving Israel abound. Aharoni says that Israel’s recent participation in the Glasgow Climate Change Conference is an example of a change in the collaborative attitude that is taking place in this country. When the last climate change conference was held in 2016, he notes, Israel’s Prime Minister did not attend, and the Israeli Environmental Minister decided to attend only at the last moment. By contrast, Prime Minister Bennett participated in this year’s conference, along with a 120-member delegation.

Cooperation, collaboration, and global solidarity are the watchwords of the future, and Tel Aviv University’s International program is uniquely positioned at the forefront of this new world. Just ask Ido Aharoni.

TAUi will be hosting a live webinar, on November 14 at 4:30 p.m. IST, where you can hear from leaders in academia, bio-tech and international diplomacy and learn how you, too, can become a member of the global community. Click here to register.