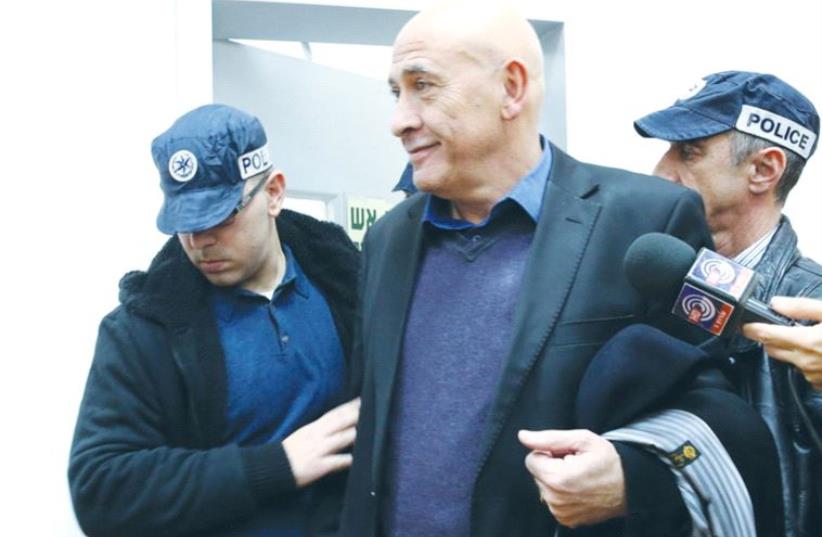 MK Basel Ghattas
(photo credit: KOKO/POOL ISRAEL HAYOM)
Advertisement
Ex-MK Basel Ghattas, who entered Gilboa Prison Sunday to start a two-year sentence for smuggling cellphones to Arab security prisoners, has penned a blistering attack on Joint List chairman Ayman Odeh, calling him a “submissive agent” of reviled Zionists.The broadside, written just before Ghattas entered prison, was posted Tuesday on the Arab48 website, which is close to Ghattas’s Balad party.“Our people don’t want their representatives to be submissive agents. We want leaders for our people who can achieve equality,” Ghattas wrote.Balad, which takes a hardline nationalist stance that is uncompromising in its rejection of Zionism, contributes three of the 13 seats of the Joint List, while Hadash, which espouses Arab-Jewish cooperation, contributes four.The parties and other Arab groupings allied in 2015 when they realized that in running separately for the Knesset they might not get enough votes to pass after the threshold for entry was raised at the impetus of right-wing parties.Tensions have simmered between Balad and Hadash before, but Ghattas’s letter was the most serious expression of differences since the Joint List was founded. In a sense, it seemed to be a settling of scores with Odeh, who in media interviews in December had sharply criticized Ghattas for the cellphone smuggling, saying the struggle for equality should only be carried out by legal means. Ghattas has said he smuggled the phones and SIM cards into Ketziot Prison for “humanitarian and moral reasons.”Ghattas wrote: “I’m very worried about the continuation of the Joint List” in light of the “behavior” of Odeh.He flayed Odeh for a recent joint appearance with leftwing Zionist Meretz party leader Zehava Gal-On and for participating in a Peace Now-led demonstration last month.“We are the owners of the country and should be very strong in confronting the Zionist colonial project, not be a follower of Meretz and participate in a press conference with Zehava Gal-On on the day of unifying Jerusalem. It’s not important what he said. What’s important is the position and timing and the Israeli-Zionist method and its symbolism.”Of the Peace Now demonstration, called to mark the 50th anniversary of Israeli rule in the territories Ghattas wrote: “How do you participate in our name in a demonstration whose slogans are Zionist and full of racism?” Ghattas also took issue with Odeh’s support of Palestinian Authority President Mahmoud Abbas, whom many in Balad perceive as a collaborator with Israel.Referring to the 1993 Oslo agreement on self-rule, Ghattas wrote that Odeh’s support for Abbas turned him into “a preacher of Oslo after the disaster it brought.”“The problem in all this is that Odeh was speaking as chairman of the Joint List, not in his personal capacity or as representative [of Hadash]. We demand Odeh represent all components of the list,” he stated.Ghattas wrote that he and others had raised objections to Odeh’s approach in internal dialogue, but “this didn’t stop Odeh from continuing his divisive behavior. The time has come to make this dialogue public to protect the list.”Odeh’s office declined to comment on Ghattas’s article, as did Hadash MKs Aida Touma-Sliman and Yousef Jabareen. But, a source in the Joint List who asked not to be identified said: “This won’t have any effect on the Joint List and its work. Ghattas didn’t help the Joint List work together, he worked against the unity of the Joint List when he was an MK. He was always divisive.”Ghattas accepted the two-year sentence as a plea bargain, and vowed Sunday to return to political activity after his release.Political analyst Wadie Abu Nassar, head of the International Center for Consultations in Haifa, said the “vast majority” of Arab citizens of Israel believe Ghattas should not have smuggled the cellphones.Of Ghattas’s article, he said: “I don’t think this is a wise way of dealing with things. The Joint List should be like a family. Instead of disagreements in public, they should clarify things behind closed doors.“This hurts the Joint List in terms of the internal coordination among the various components and, secondly, in terms of the confidence of the people. People will say if they are fighting themselves why should we trust them?”