The parade, in its third year, was the Sharon region’s largest, taking revelers on a journey into the storybook realm. 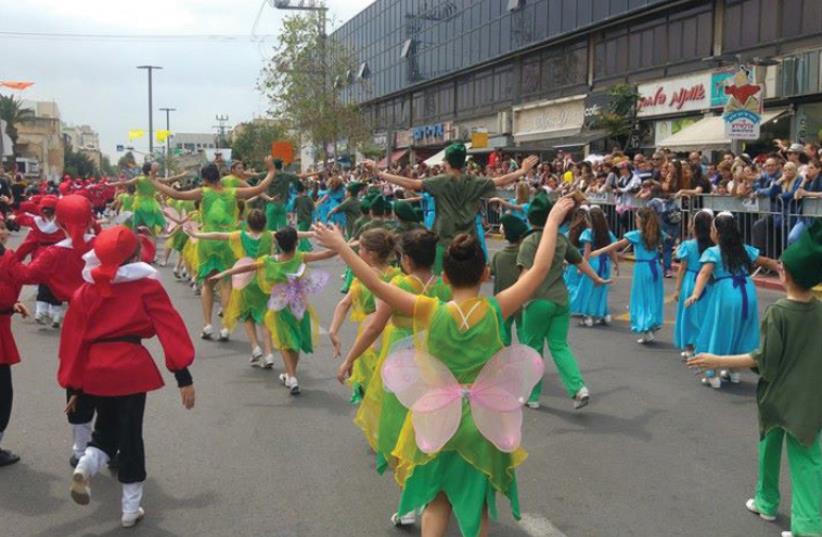 CROWDS CHEER from the sidelines as angels, elves, dwarves and other storybook characters take over main Herzliya thoroughfares in yesterday’s annual Adloyada event.
(photo credit: HERZLIYA MUNICIPALITY)
Advertisement
Princesses, superheroes, clowns and wild animals lined the streets of Herzliya on Thursday as people of all ages celebrated the city’s annual Purim Adloyada.The parade, in its third year, was the Sharon region’s largest, taking revelers on a journey into the storybook realm.Giant floats featured classic tales such as Peter Pan, Little Red Riding Hood, The Little Mermaid, and Alice and Wonderland – alongside classic Israeli stories such as A Tale of Five Balloons (Ma’ase be Hamisha Ballonim), Apartment for Rent (Dira Lehaskir), and Hot Corn (Tiras Cham).“Herzliya’s Adloyada, which began with my desire to please the children of the city and make it easier on their parents, has quickly become a central attraction that brings tens of thousands of children and parents from all over the country,” said Herzliya Mayor Moshe Padlon before the parade.The name “Adloyada” is derived from the rabbinic saying that one should drink on Purim “Ad delo yada” (until one no longer knows) the difference between “blessed be Mordecai” and “cursed be Haman.”Thousands of the city’s residents and spectators from around the country who opted to skip the larger Purim celebrations in Holon lined the streets as they braved the hot sunny weather and cheered on the procession.“It’s really hot today, but the kids don’t seem to mind.They are really enjoying themselves,” Tami, a Herzliya native who attended the parade with her three children told The Jerusalem Post.“It’s really great to be able to walk down from our house and watch the parade. It’s not the biggest in Israel, but it’s our local Adloyada and we really enjoy it,” she said.Last year the city successfully celebrated its second Adloyada by taking more than 40,000 visitors on a “trip” around the world with floats featuring iconic landmarks of foreign countries – including the US, India, Europe, Brazil and of course Israel.“Last year we also came and it was really great. We had a few friends who came to the parade from Tel Aviv and also from Ramat Hasharon,” she added.“It’s much more convenient and you beat getting stuck in traffic for some of the other parades.”The parade began at 10 a.m.from Ben-Shefer Park and continued along Sokolov and Ben-Gurion streets – two of the city’s central streets – to Sha’ar Ha’ir (City Gate), near the municipality building.Following the roughly 1.5- km. parade, a range of children’s activities were available: gymborees, dances and musical performances; Kofiko the monkey, a popular children’s character, entertained spectators.