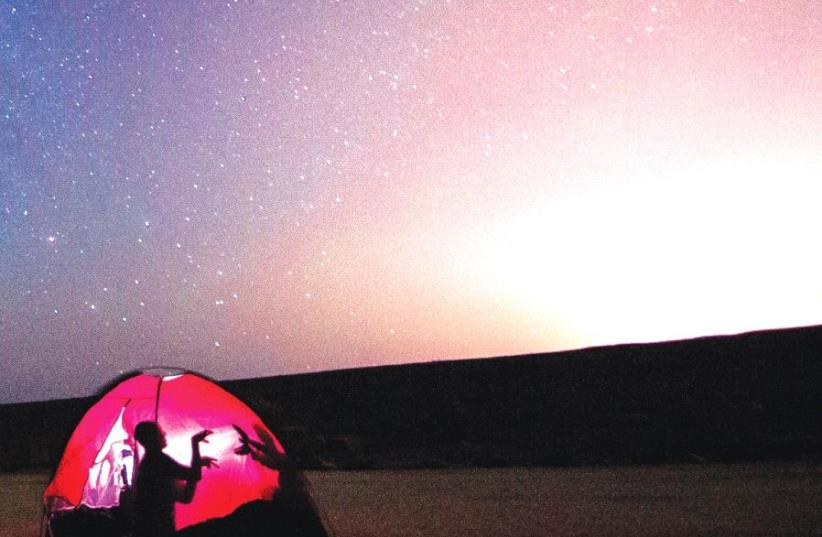 Under the stars in Mitzpe Ramon
(photo credit: MARIK SHNITMAN)
Advertisement
Hodesh Nisan has just begun!The entire Jewish year is anchored on this single necessity: Passover must always fall in the spring. The entire process of determining the dates of the solar/lunar Hebrew calendar revolves around this imperative, so much so that the Torah calls Nisan “Hodesh ha-Aviv.”Hodesh Nisan is associated with the constellation (mazal) of Aries, the planet Mars (Ma’adin), and the Tribe of Yehuda. The sign of Aries is the ram, the first of the Zodiac signs, the sign of leadership. Just as Yehuda led the rest of the Tribes during their desert wanderings, Yehuda leads the constellations which follow in the formation to their Tribal correspondences around the zodiac.Because 5779 is a shanah meuberet (a “pregnant” year), Rosh Hodesh Nisan began Friday April 5th, about fifteen and a half days after Tekufat Nisan, the Vernal Equinox, causing the Full Moon of Passover to appear on the afternoon of Friday, April 19. For Israel, the Passover Seder will happen with the Sun at the final degree of Aries and the Moon at the final degree of Libra, while in the Diaspora during the second night of Passover, the Sun will already have just entered Taurus and the Moon in Scorpio, shortly followed by Venus moving into Aries. This crucial time period between Wednesday, April 17 when Mercury (Kochav) moves into Aries through Sunday, April 21 this year impacts not just Israel, but the world. If the year is indeed pregnant, we’ve now completed the transition period of the labor and it’s time to begin pushing! The attributes of Nisan/Aries/Yehuda are courage, valor, bravery, resolve, fiercely passionate about doing what is right, protecting those weaker than themselves and initiating inspiration into this world. May we collectively channel our energetic heritage and birth new hope during this auspicious time!ARIES / TALEHYour annual personal New Moon in Aries April 5th ushers in a rush of energetic vitality. Ruling planet Mars (Ma’adin) in Gemini this month brings multiple opportunities to be the most personally passionate, sincere and effective version of yourself. Say yes to everything and see which direction bears fruit. Jupiter stations Retrograde April 10 at the First Quarter Moon in security-minded Cancer, inviting you to take realistic stock of your resources. The Full Moon of Passover spotlights relationships and supports inviting intimacy both spiritual and emotional into your privacy zone. Trust your instincts to lead you home.TAURUS / SHORThough only halfway through Hodesh Nisan, the Sun enters Taurus April 20, with the Full Moon in Scorpio, opposite your Sun – just as ruling planet Venus (Noga) enters Aries! Get ready for an energetic roller-coaster ride during Passover! Lighten the load as much as possible to weather the range of extremes you’ll feel April 19-21. Throw the emotional baggage overboard! May 3-4 is your annual personal New Moon in Taurus. It’s the beginning of a new cycle for you and the less you bring forward from what you’ve left behind, the better you’ll do this time around.GEMINI / TAUMIMMars (Ma’adin) in Gemini through mid-May supercharges you on every level. Physical vitality is high and you’re more restless than usual – ensure your body gets as many opportunities to exude exuberant energy as possible, especially after planetary ruler Mercury (Kochav) moves from passive, flowing Pisces fresh, assertive Aries on April 17. Jupiter (Tzedek) in solar opposite Sagittarius goes Retrograde April 10 during Gemini Moon, asking you to pause and reconsider the boundaries between data and interpretation. Information is power only when it is powerfully framed. Perspective is your holy grail and that can’t be achieved without distance.CANCER / SARTANBlame it on a simple twist of fate as the First Quarter Moon in Cancer conjuncts the North Node April 12. By Passover, you’re empowered to boldly proclaim your truth. You may speak the truth in love, or you may speak truth to power; perhaps both. By May 1, you’ll need to put your money where your mouth is: back up your statements with concrete life choices that align with the truths you bravely told yourself and others earlier. Trust the process of self-revelation, the gifts of authenticity and real-time connectivity with others that it brings.LEO / ARYEHPassionate emotions surface April 13-14 and come to a quick boil by April 17 when you must express them or explode. Use every diplomatic skill in your possession while doing so or you’ll find yourself tripping through a briar patch of thorny feelings – your own and others – the weekend of April 19-21 when you’re most likely to be surrounded by family and loved ones. The Last Quarter Moon in solar opposite Aquarius on April 26 supports releasing attachment to identity markers signifying elitism while consequently separating you from those you most want to be close with.

VIRGO / BETULAHRomantic, creative Venus (Noga) in solar opposite Pisces through April 20 models unconditional, boundary-less love, balm for the bruising you may have received recently in the realm of professional status and capabilities. Jupiter in Sagittarius in your solar 10th House has been supersizing your professional life; Jupiter stations Retrograde on April 10 through mid-August, inviting you to review a career path you embarked on mid-January of this year. Unacknowledged wounds may reopen April 17-20, but if you’ve laid a foundation of gentle self-care and loving self-acceptance, you can move to a healing space, bringing new growth.LIBRA / MOZNAYIMThe New Moon in solar opposite Aries April 5 triggers a reevaluation of the balance between individuality and intimacy. The Full Moon in Libra on the first night of Passover followed by ruling planet Venus (Noga) in Aries a few hours later tests that new balance. Whereas your default setting is to prioritize partnership, these transits suggest you may be shortchanging your needs as an individual within relationships. Your famous diplomacy skills are fully functional as you feel empowered now to communicate your autonomy needs after April 17 when Mercury (Kochav) enters assertive Aries. Fairness blesses yourself and your partner!SCORPIO / EKRAVYour classical planetary ruler Mars (Ma’adin) in Gemini during April feels light and lively, while your modern planetary ruler Pluto’s Retrograde in Capricorn on April 24 simmers on the back burner through early October, giving you nearly six months to confirm any life-direction altering changes you’ve instituted since January of this year. Passover triggers a powerful control reflex: how much you’ll be able to exercise it depends on the environment. Traditions not your own activate nostalgia for a past both real and imagined. Identify what’s authentically yours and find value in sharing from your own root source.SAGITTARIUS / KESHETJupiter (Tzedek) in your home sign stations Retrograde April 10 until Erev Tisha Be’av! It is during this four-month period that you get to review, re-evaluate and redirect decisions you made mid-January of this year. If you chose the right course, you’ll refine it to an even purer level. If you require a course correction, this is your chance to turn your ship of state towards your own True North. Mercury (Kochav) in Pisces squares the Retrograde, allowing a reality check of unrealistic ways you’ve presented yourself in the past. Speak good of yourself with gentle truth.CAPRICORN / GIDIRuling planet Saturn (Shabbtai) stations Retrograde in Capricorn April 29 through mid-September. The foundation you laid for this current phase of your life in mid-January goes through the re-confirmation process. The sieve used to separate the useful from what is not serving to further your aims is activates April 24 when Pluto stations Retrograde in your home sign as well. Your task through May 2020 is a remake of your relationship to power and its uses, for better of worse. Now is your time to understand the role you play in your own personal influence and agency.AQUARIUS / D’LIYou’re more of an innovator than a traditionalist but you’ll be called upon to search the past for answers to future dilemmas at the Retrograde of classical ruler Saturn (Shabbtai) April 10. Venus (Noga) in your solar 2nd House through April 20 brings shefa and enrichment through sources both comfortingly familiar and surprisingly new. Mars (Ma’adin) speeding through Gemini all during April supports both mental vitality and variety. Last Quarter Moon in your home sign April 27 brings release of ancient grudges you’ve almost forgotten you were holding, making room for a renewed enlargement of the heart.PISCES / DAGIMYou may be feeling somewhat worse for wear after last month’s difficult Mercury Retrograde in your home sign. Mercury (Kochav) and Venus (Noga) in Pisces through April 17 and 20 respectively tag-team to bring a much-needed measure of healing to a heart weary of uncertainty. Are you confused about what you thought was the real thing? Ambiguity’s escape hatch is the luxury of vagueness, denying emotional certainty and all accompanying benefits such as trust and fidelity. Miscommunication can be corrected when you reject ambiguity in favor of commitment. You must say what you want to receive it.
Author and multi-media communicator Lorelai Kude began her career as a professional astrologer in the 1980s. She holds a BA in Journalism from San Francisco State University and a MA in Jewish Studies from Berkeley’s Graduate Theological Union, where her thesis topic was astrology in Jewish cultural history. Find more of her work at astrolojew.com.