Looking at Israel’s earthquake preparedness in the wake of the tragedy in Italy, Lederman praised the country’s efforts to strengthen buildings, train people in evacuation methods and educate. 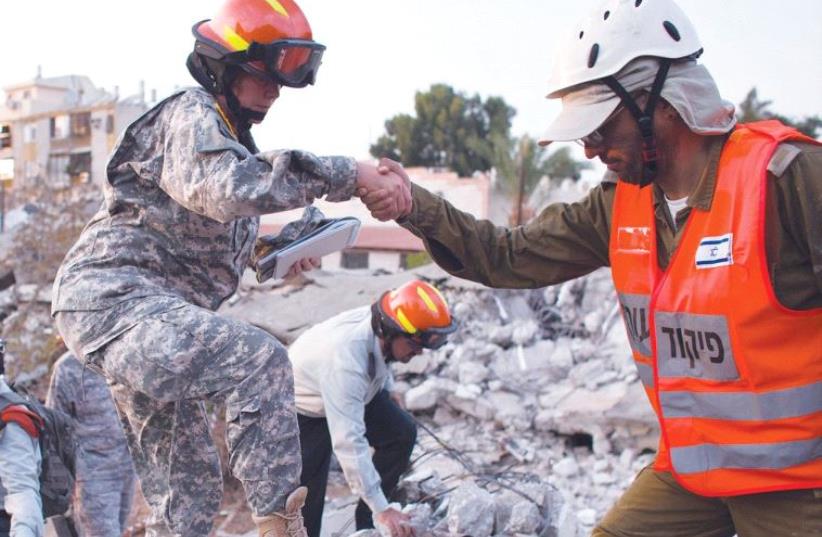 IDF SOLDIERS and US Army observers stand on rubble during an earthquake drill in Holon in October 2012.
(photo credit: NIR ELIAS / REUTERS)
Advertisement
Personalizing disaster alert applications to fit the individual user could dramatically improve civilian preparedness in events like the Wednesday earthquake that devastated central Italy, according to an Israeli research team.“There are many applications that give early warning for terrorist attacks, missile attacks through smartphones,” Eran Lederman, head of the Relevant Design for Disaster Research Group at the Bezalel Academy of Arts and Design, told The Jerusalem Post on Thursday.“When you are dealing with earthquakes that might come once in 100 years, it’s a different early warning. You have one shot.”Lederman is the principal investigator of the Personal Essential Package Capsule project, which aims to make alert information for natural disasters more accessible to the civilian population.While a host of smartphone applications exist that alert users to events such as earthquakes, the PEP Capsule project hopes to optimize their effectiveness by personalizing their output based on parameters like user age, geo-location and emergency training background.“The main idea is not to build a new app, but to give all the apps that are trying to [provide] an early warning the right way to do it,” Lederman said.Already nearing the end of the first quarter of their two-year project, funded by the Science and Technology Ministry, Lederman’s group is working with Dr. Hillel Aviezer of the Hebrew University’s psychology department.The optimal alert might use different sounds, texts, images and vibrations tailored to fit the individual user, both before and after the event occurs, Lederman explained.“The warning will be a trigger that activates a PEP Capsule stored in your phone,” he said.For now, that capsule is a theoretical concept being researched by Lederman’s group as to how relevant information stored in a phone’s memory might be optimally employed during a disaster. However, the hope is that the research could influence either commercial or government entities to concretize that capsule.“We try to focus on the few seconds right before the earthquake and more than that, after the earthquake,” Lederman said. “Even if the cellular network fails you still might have information in your cellular phone, as long as you have a battery.”Even a 10-second alert prior to an earthquake can allow a person to wake up from sleeping, pull over to the side of a road or pause a medical procedure, according to Lederman.“You can go outside the building, you can go under the table, you can be two floors down. It means that every second counts,” he continued. “I believe that if the people in Italy would have had 8 or 10 seconds, most of them would have been awake. And if you can be awake you can act very efficiently.”Instead, he explained, people woke up and were uncertain what to do – they had no idea where there might be emergency services, water or other necessities. With the help of a PEP capsule, alert applications tailored to their personal needs could provide those affected with crucial information in the aftermath of the event, Lederman said.“All this data and experience changes the situation from trauma to post-trauma, and it makes a difference,” he added.Lederman has 50 different earthquake warning apps downloaded on his phone, from all over the world. By studying how different cultures receive and use their warnings, he said that he and his group members are hoping to understand “the best way to send the information to you – not to me and not to my grandmother.”Looking at Israel’s earthquake preparedness in the wake of the tragedy in Italy, Lederman praised the country’s efforts to strengthen buildings, train people in evacuation methods and educate children about how to respond.“Israel is a very small country and the community is very strong here,” he said.“The neighbors will help you more than the authorities in the case of an emergency.”That being said, Lederman stressed that there is much more work to be done.“As we speak, we know that we have to get even better,” he added.