Israel and denuclearization: Necessary paradox or hypocrisy in action?

While Israel maintains nuclear ambiguity, the Jewish state is believed to possess up to 200 atomic weapons. 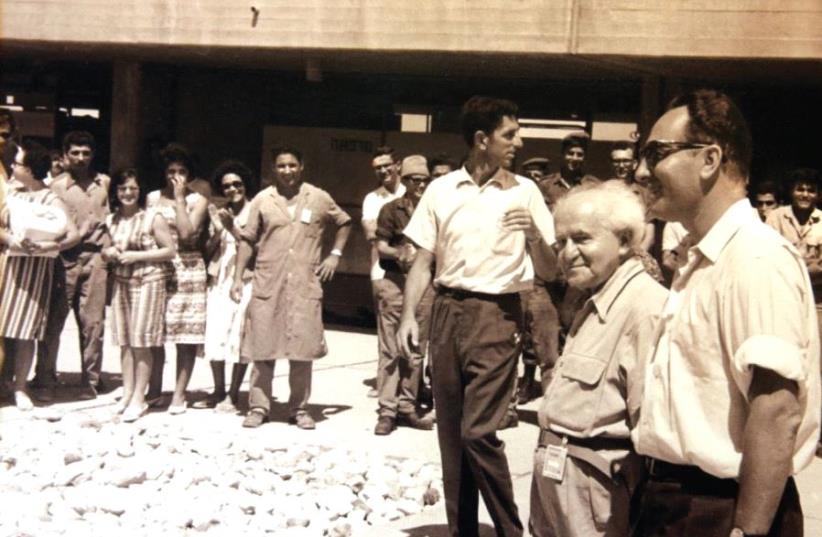 David Ben-Gurion and Shimon Peres visiting the Dimona nuclear reactor
(photo credit: DEFENSE MINISTRY)
Advertisement
Although Israel maintains a policy of ambiguity regarding its possession of nuclear weapons, the Jewish state is known to have a sizeable atomic arsenal. David Ben Gurion, Israel's first prime minister, established with the help of France a covert nuclear program in the 1950s to combat against what was widely viewed as an existential military threat posed by Arab neighbors. Ever since, information has from time-to-time been leaked regarding the size and potency of Israel’s atomic capabilities, although no independent body has confirmed specific figures.Against this backdrop, the United States—which has the world's second-largest nuclear stockpile after Russia—is actively promoting global non-proliferation. To this end, President Donald Trump is slated to hold a summit with North Korean ruler Kim Jong-Un to discuss the Peninsula's denuclearization; and the US leader recently withdrew Washington from the Joint Comprehensive Plan of Action (commonly referred to as the Iran nuclear accord), which, in his estimation, would not have prevented Tehran's acquisition of the bomb over the long-term.For many, a clear dichotomy—if not double-standard—emerges when these policies are juxtaposed against the world's hush-hush approach to—if not tacit approval of—Israel's nuclear arms program.According to Shannon Kile, head of the Nuclear Weapons Project at the Stockholm International Peace Research Institute (SIPRI), Israel exists in a sort of legal limbo given that it is not a party to the 1968 Treaty on the Non-Proliferation of Nuclear Weapons (NPT), which codified into international law regulations governing nuclear development. By contrast, he explained to The Media Line, “the United States has the moral and legal right to pressure North Korea and Iran [in ways that are] set out in the binding treaty."The NPT legally recognized legitimate nuclear nations and in the treaty, North Korea and Iran were barred from making nuclear weapons," Kile elaborated, while qualifying that Pyongyang did pull-out of the NPT in 2003, blaming its decision on "U.S. aggression."Nevertheless, Kile noted, there is “a long-running international dispute over [Israel’s] nuclear program. NPT countries, particularly Egypt, have argued for a nuclear-free zone in the Middle East that would include Israel. This notion," he continued, "was a key pillar in the extension of the treaty in 1995. But not all countries seem willing to force Israel to sign up.”More broadly, Kile believes that there "needs to be a commitment for all nuclear states to fulfill their obligation to denuclearize, as this would bolster the norm against atomic weapons. All NTP signatories have committed to abolishing their nuclear arms yet we see no real progress on that, even in the United States.”Dr. Emily Landau, head of the Arms Control and Regional Security Program at the Tel Aviv-based Institute for National Security Studies, holds that Israel has a fundamental need for nuclear weapons given numerous previous attempts to destroy the country, coupled with ongoing threats to this effect emanating from, ironically, the Islamic Republic. “Israel, historically and strategically, has a record of restraint and responsibility," she stressed to The Media Line. "It also has the most reason for a nuclear deterrent. In fact, it’s the only state with a reasonable threat that would justify these weapons."That being said, what we see in the international community is a reasonableness that is taken into account," Dr. Landau expounded. "In international politics, it’s not always about what’s fair, but it is about who is trying to deal with fear and security. It’s not too hard to conclude that Israel is not a danger in the nuclear realm unless it is threatened existentially.”Lt. Col. (res.) Dr. Raphael Ofek, a former senior analyst in Israel's Military Intelligence and in the Prime Minister’s Office, agrees that context is crucial. “Comparing Israel to North Korea and Iran is quite unacceptable," he asserted to The Media Line. "Israel has threatening and dangerous neighbors in the Middle East. The deterrence that Israel’s nuclear ambiguity provides protects its right to survive and that stands over any other ethical right.”