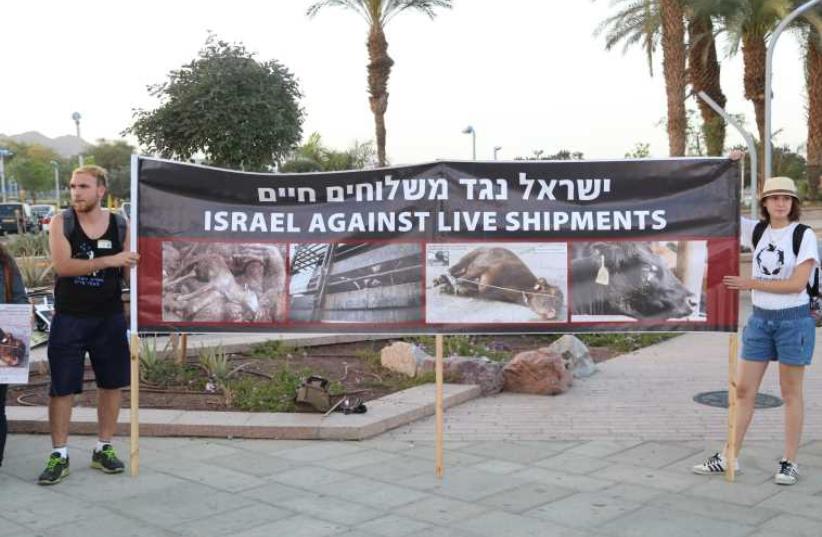 Animal rights protest in Elilat
(photo credit: YOAV BEN-DOV)
Advertisement
After discovering violations in a recent live shipment of sheep and cattle from Romania, the Israeli Agriculture Ministry’s Veterinary Services has ordered an immediate ban on such imports from the Eastern European country.Until the defects uncovered by inspectors in the shipping process are rectified, no further live animal shipments from Romania will be permitted, the Agriculture Ministry announced on Sunday. The ministry’s decision followed a previous incident in March, when the Veterinary Services also temporarily froze cattle and sheep shipments from the country after animals began arriving to Israel without suitable health certificates and examinations.“We see great importance in maintaining public health, animal health and animal welfare,” said Dr.Shlomo Grazi, director of the Veterinary Services.“Any case that deviates from the rules and harms these goals will be handled with severity.”Following the March incident, the Agriculture Ministry contacted Romania’s veterinary authorities to request an investigation of the situation and demand that the deficiencies be corrected, a ministry statement said. Once these repairs occurred, the ministry decided to green-light the shipments once again. However, in light of the newly discovered problems, Israel has now immediately halted the imports until further notice, the statement explained.“Any violation of the regulations of the Agriculture Ministry regarding the import of cattle into Israel is handled stringently,” Uri Ariel, who is minister of agriculture and rural development, said. “At the same time, we are continuing to work to reduce live shipments by increasing quotas for importing meat to Israel and extending the shelf life of chilled meat.“The Agriculture Ministry’s strict demands on the issue of live shipments are protecting public health and are intended to reduce animal distress if possible,” he added.Over the past year, duty-free import quotas for beef have been increased to 7,500 tons, a number that will rise even further over the next few years, the ministry said. To date, there are about 110 factories in countries in Europe, South America and the United States authorized to export beef and lamb products to Israel.Just two weeks ago, in an effort to minimize the suffering of animals imported to Israel for slaughter, MK Eitan Broshi (Zionist Union) announced he would be submitting a bill restricting live cattle shipments.If his legislation goes on to receive Knesset approval, live cattle imports would be subject to limits in both animal weight and travel time.Animal rights groups were far from satisfied with this proposal, calling for an outright ban on live shipments.On Sunday, following the announcement of the temporary ban in imports from Romania, the groups Anonymous for Animal Rights and Let Animals Live once again stressed the importance of prohibiting the practice entirely.“Animal shipments are not just a severe abuse of animals,” they said in a joint statement. “Professional bodies around the world oppose them, because animals sent in droves can carry diseases and parasites and endanger public health, animals and the environment of the import country.“Unfortunately, the meat industry is concerned only with profit, they do not care about public health and they certainly do not care about the animals.The Israeli public opposes live shipments. We call on Minister Ariel to stop live shipments and put an end to this unnecessary abuse,” the organizations demanded in their statement.