As Jews around the world prepare for Israel’s momentous 70th anniversary, missions such as these created by the Bonds organization serve to inspire young luminaries.

By VICTORIA D. ANDRETTA
JANUARY 14, 2018 10:49
Israel Bonds National New Leadership Division Bootcamp Retreat participants and staff conclude a full schedule of seminars, discussions and engaging activities over a three-day weekend in December 2017 at Camp Young Judaea in Wimberley, Texas
(photo credit: HAROLD FISCH)
Advertisement
In the aftermath of the War of Independence which left the newly-founded State of Israel in a financial and societal crisis, then-Prime Minister David Ben-Gurion set forth on a mission to build the Jewish nation.  Under his dominion, he sought to engage the modern Diaspora and Jews worldwide by providing them a fiscal utility to invest in the prosperity of the new homeland, and by successful materialization of the Israel Bonds venture he was able to accomplish his goals, thereby achieving economic sanctity for the reborn state. But securing the continuity and prolonging the legacy of bond investment to nourish the Jewish establishment would be the ultimate feat, as a methodical plan to reach future generations of bondholders was conclusively devised decades later.  Fast forward to 1979, when a select group of influential young couples were invited to Washington to form the Israel Bonds New Leadership Division, and New Leadership Chairman Ron Krongold and his wife Glenda auspiciously led a 120-member delegation to Israel and visited 22 U.S. cities to spur support for Israel Bonds. As their collaborative efforts produced tremendous acclaim, the New Leadership Division proved to be a winning tour de force and paved the way for a succession of new leaders. 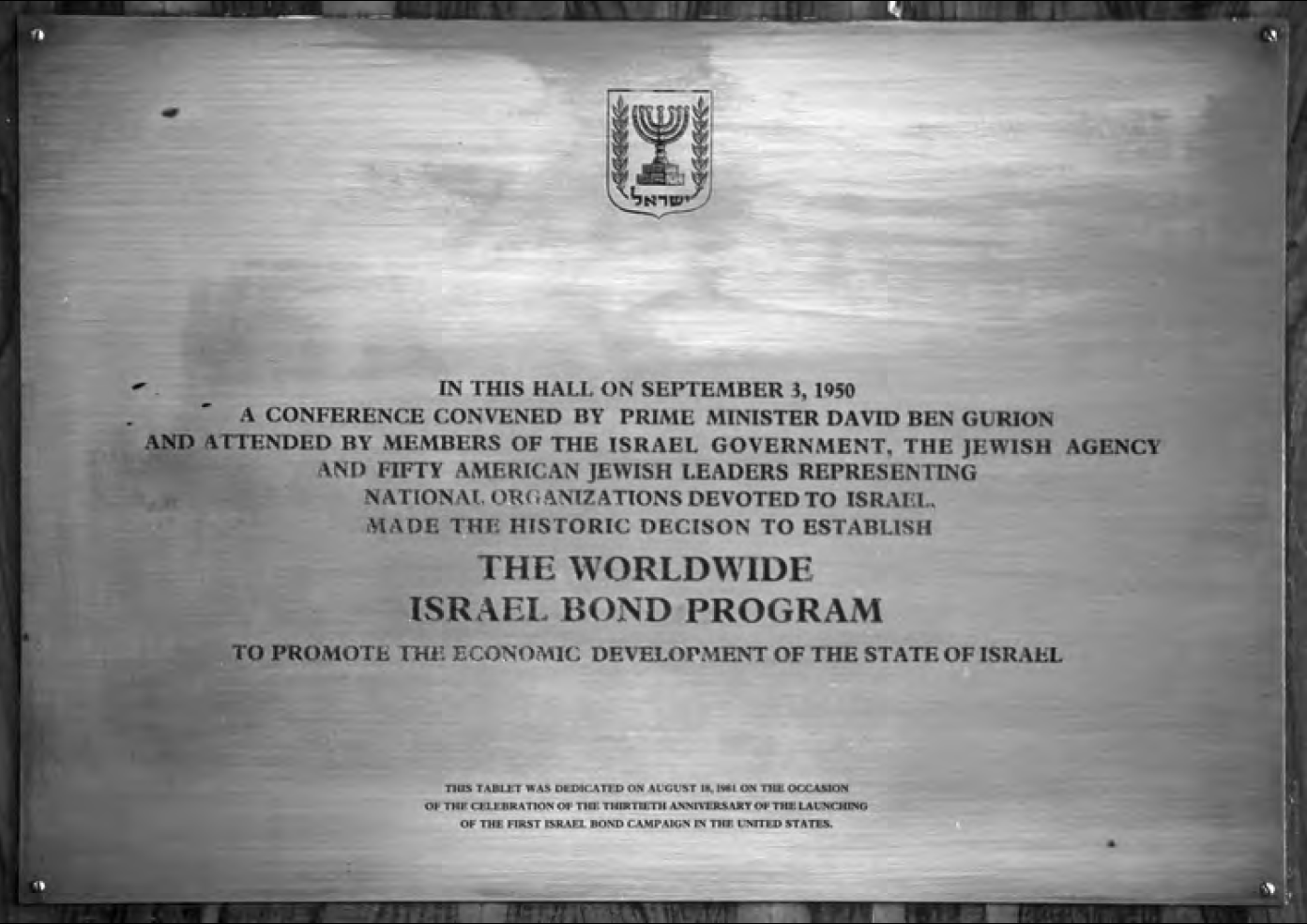 A commemorative plaque displayed in Jerusalem’s King David Hotel marks the site of the inaugural conference led by former Prime Minister David Ben-Gurion in September 1950, which resulted in the founding of Israel Bonds, a $40 billion success story spanning over 60 years Current Vice Chairman of the Board Howard Goldstein, advanced through the hierarchy of New Leadership, serving as Miami’s local chairman for eight years and subsequently North American New Leadership chairman, followed by positions as chairman of the Miami campaign and national chairman of professions.  Like many of his colleagues and fellow pro-Israel supporters, Goldstein understood the importance of strengthening the ties of the young Jewish populace to Israel in order to secure the nation’s prolonged success, as did his wife Marcy, who was instrumental in forming numerous delegations to Israel and annual galas for New Leadership. Recalling his earlier days assisting in organizing Bonds-driven events specifically catered to reaching burgeoning Jewish leaders, Goldstein remarks: “The goal of the New Leadership Division has always been to create opportunities where young people have the chance to unite and celebrate Judaism, bond over appreciation for Israel, and band together as a global stronghold to protect and perpetuate the thriving of a nation that has a reputation for triumph when faced with what seemed like unsurmountable challenges. In my role as vice chairman of the board we are presently witnessing more younger leadership procure board positions than ever before.”  Present Chairman of the Board Richard L. Hirsch, also heavily engrained in the upbringing of New Leadership, confirms Goldstein’s observations asserting, “Today’s youth are representations of tomorrow’s emerging leaders, and it is imperative that we instill in them the desire to influence change in response to the growing needs of Israel’s economy and our organization.”     In early December 2017, Bonds’ board member Jason Schwartz along with Chair of National New Leadership David Matz, took heed of the duty bestowed on them by Hirsch, Goldstein, the Krongolds and other current and former Bonds visionaries, and embarked on a journey to Wimberley and Austin, Texas, welcoming a select group of 40 young professionals from seven countries across three continents to Camp Young Judaea to usher in the inaugural Bonds Bootcamp New Leadership Retreat.  The three-day expedition brought tenacious, worldly progenies to meet fellow New Leadership members and to learn from Israel Bonds senior leadership, lay leaders and staff about ways to become more involved in the Bonds enterprise and to increase their knowledge on the significance of investing.  Eagerly bound to an eventful itinerary, young investors gained intelligence from guest speakers Texas Land Commissioner George P. Bush, Israel’s Ground Forces Attaché to the US, IDF Col. Yaron Beit-On, and heard from JSwipe founder David Yarus. The group networked with guests and presenters, and attended panel discussions, thought-provoking seminars and captivating workshops which focused on solidifying one’s connection with Israel and understanding how to serve as prominent young leaders in their respective communities to encourage Israel advocacy. But amidst all the excitement and learning, perhaps the most resounding takeaways were the lessons taught by Bonds senior leadership and directives from peers.  President and CEO of Israel Bonds Israel Maimon spoke on the virtue of fortifying the younger generation’s connection to Eretz Israel and its people in a moving lecture.  Reading from Foundations: One Hundred Concepts in Judaism, a book by Rabbi Israel Meir Lau, former chief rabbi of Tel Aviv, Ashkenazi chief rabbi of Israel and chairman of Yad Vashem, Maimon emphasized the affirmation of the venerated rabbi by stating, “Fostering the development of aspiring young leaders is a critical necessity for strengthening the ties between Israel and the Diaspora and the need to deepen the Jewish identity.”  Panel participants and National New Leadership council members Jason Langsner and Teri Herbstman similarly reverberated the vocation of the Bonds mandate.  Langsner, also vice-chair of National New Leadership and avid pro-Israel essayist, encouraged the future trailblazers to be active within their cities and spread awareness of Bonds initiatives.  Herbstman, a passionate Israel supporter and philanthropist, illustrated ways that she invests such as donating purchased bonds to American universities in a demonstration to stand against anti-Semitism, and highlighted how Israel bonds can satisfy a double mitzvah by gifting them for life’s celebrations while simultaneously enhancing the Jewish homeland.   As Jews around the world prepare for Israel’s momentous 70th anniversary, missions such as these created by the Bonds organization serve to inspire young luminaries by empowering them with guidance and knowledge, enabling them to uphold the tradition conceived by their family members of investing in Israel bonds to support the nation’s economy.  Through their persevering dedication and pride in their Jewish faith, the legacy of Israel bonds will continue for generations to come.
The writer is associate national director of marketing & communications for Development Corporation for Israel/Israel Bonds (“DCI”), a broker-dealer that sells Israel bonds. The content in this article was prepared by DCI and the Jerusalem Post as part of an advertising campaign for DCI.