Netanyahu attended the last Visegrad summit in July in Budapest and offered then to host the next meeting in Israel. 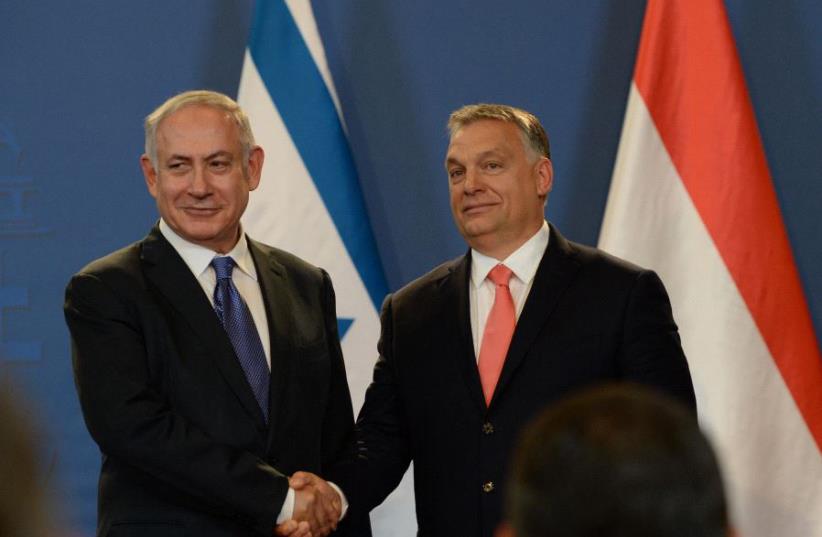 Netanyahu and Orban
(photo credit: CHAIM ZACH / GPO)
Advertisement
Prime Minister Benjamin Netanyahu spoke this week with a senior adviser to Hungarian President Viktor Orban about hosting a summit that would include Poland’s prime minister, a sign Jerusalem does not intend to dramatically downgrade ties with Warsaw following its controversial law on the Holocaust.After a meeting on Tuesday with Jozsef Czukor, Orban’s national security adviser, the Prime Minister’s Office issued a statement saying that the possibility was discussed of holding in Jerusalem in the coming months the next meeting of the heads of the four countries that make up the Visegrad Group: Hungary, Poland, the Czech Republic and Slovakia.Netanyahu attended the last Visegrad summit in July in Budapest and offered then to host the next meeting in Israel. Those four countries are often among the states Israel turns to when it wants to combat problematic resolutions and moves inside the EU.Diplomatic officials confirmed that if Netanyahu is talking about hosting the summit, which would include Polish Prime Minister Mateusz Morawiecki, then that is a sign that Israel does not intend to withdraw its ambassador from Poland to protest the recent passage of the controversial law criminalizing anyone who implicates the “Polish Nation or Polish State” for culpability in the Holocaust.In recent days, voices were raised inside the Knesset’s Foreign Affairs and Defense Committee calling on the government to recall the ambassador to Poland to protest the law.  One Foreign Ministry official said, however, that even if such a recommendation were made, it would not be binding.The Knesset, meanwhile, invited the director-general of the Polish parliament to participate in a conference of secretaries-general of parliaments from more than 30 countries around the world that will be held in the Knesset next week. The invitation went out despite the Foreign Ministry’s recommendation that, because of the current crisis, Poland should not be invited.In the meantime, while the angry rhetoric over the law in both countries has subsided in recent days, Israel is waiting for the final decision of the Polish Constitutional Tribunal to see if the law will be amended in any form. Polish President Andrzej Duda said after he signed the bill last week that he would send it to the court for judicial review, leaving open the possibility of a last-ditch amendment to the legislation.No date has yet been given on when the issue is scheduled to come before the court.