Welfare minister Haim Katz says people must go back to work. Unemployment at record low of 4.6%. 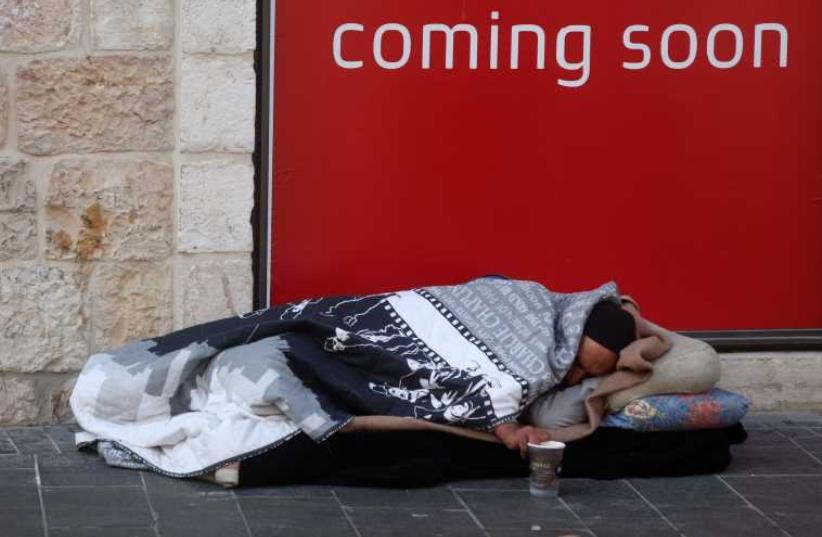 Homeless person on Jaffa Street in Jerusalem.
(photo credit: MARC ISRAEL SELLEM/THE JERUSALEM POST)
Advertisement
Israel is ranked among the member countries at the bottom of the Organization for Economic Cooperation and Development (OECD) for investment in social welfare, according to an annual report released by the National Insurance Institute (NII) on Monday.The chance that an Israeli child under age 17 will be poor stands at 25%, said the OECD, ranking Israel only second to Turkey in the rate of child poverty and nearly double the average OECD rate of 12.9%.The chance of being poor decreases with age, the report said. Young adults aged 18 to 25 have an 18.2% chance of being poor, while 15.8% of adults aged 26 to 50 live in poverty and only 10% of adults aged 51 to 65 are poor.This figure rises sharply, however, among the elderly, as 21.7% of people ages 66 or above are poor – more than double the OECD average of 10.7%.Labor and Social Services Minister Haim Katz addressed the findings in an interview with Reshet Bet, saying the government was acting to address these issues and mentioning an increase in funding for pensions and child allotments in 2017. He told the radio station that since he took office, the ministry’s budget had increased from NIS 4.5 billion in 2014 to NIS 8.5b. budgeted for 2017.The OECD report, which provides an annual overview of socioeconomic status, found that Israel invested 16.1% of its GDP on social welfare in 2015, much lower than the OECD average of 21.6%. This places Israel above only South Korea, Chile and Mexico.Of the funds allocated, 8.7% went toward paying allotments, while the remainder was geared primarily toward health services, the findings revealed. The report further noted that the NII had paid NIS 74.2b. in 2015 toward pensions and allotments.In the preface to the report, director-general Shlomo Mor Yosef wrote that the NII “supports gradually increasing public spending by some five percentage points” so that it matches the OECD average.In a separate interview with Reshet Bet, he estimated that this amounted to an increase of some NIS 65b. in the social services budget.“We don’t expect this to happen, but we do expect this to be the goal of Israeli governments so that we can spend more on welfare services,” he said.In his own interview, Katz said Israel didn’t have NIS 65b. to allocate solely toward social welfare, although the government aimed to increase the budget by one or two billion shekels every year. The minister added that in order to reduce poverty, it would be essential to encourage people to go back to work and for the government to increase the minimum wage.The report ranked Israel among the OECD countries with the highest rates of poverty in 2014 – a ranking that has been consistent in recent years. Mor Yosef noted that the figures for 2015 were not yet available and would be released only as part of the NII’s annual poverty report, set to come out later this year.He told Reshet Bet he was optimistic that poverty rates would decrease slightly, mainly due to the reinstatement of child allotments last year.