"Even in the midst of Pride we must work on behalf of our brothers and sisters in Chechnya." 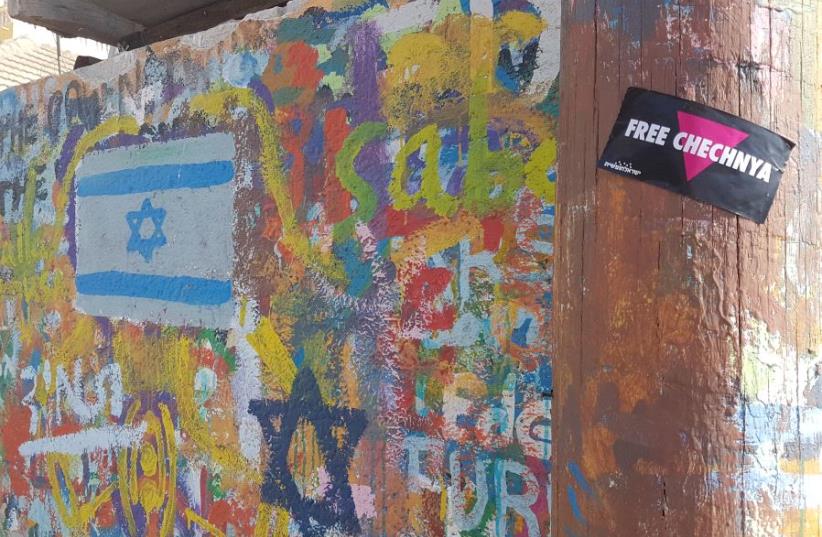 Free Chechnya sign seen during Tel Aviv Pride Parade 2017
(photo credit: BECKY BROTHMAN)
Advertisement
The Aguda – Israel’s LGBT Task Force, announced on Sunday that they raised over NIS 21,000 to aid in the rescue of persecuted members of Chechnya's LGBT community. Attacks against the LGBT community in the Caucuses have reached horrifying peaks in recent months. Over 100 gay men or men suspected of being gay in Chechnya were rounded up and tortured, Russian newspaper Novaya Gazeta reported in April.According to the Gazeta, actions against the area's LGBT community began at the end of February. Those detained for being homosexual were taken to "an illegal prison near Argun." Once there, survivor testimonies detail brutal acts of torture, including beatings, starvation and electric shock. The Gazeta reported at least three of those imprisoned have died. Ohad Hizki, Aguda's CEO, told The Jerusalem Post that the effort to aid those suffering because of their sexuality in Chechnya began when an Aguda volunteer connected the organization with an activist NGO in Russia working for the cause. After collaborating and learning about the issue, around 100 Aguda volunteers came together in activities to raise political and media awareness of the topic as well as raise money for aid."It's absurd that in 2017 things like this are still happening in the world," Hizki said. "I think because of the history of the Jewish people... because of the Holocaust... the LGBT community of Israel feels very connected to this cause."At the opening ceremony of the Tel Aviv Pride Parade on Friday, which was hosted in part by Aguda, a minute of silence was held on behalf of the LGBT community's "brothers and sisters in Chechnya."The aid will go to Aguda's partner organization in Russia, who will use the money to bail out prisoners in these illegal camps, and generally aid their rescue efforts. The Gazeta article mentioned that in best case scenarios, captives could be released for 'massive bribes.'According to the media, the surge of detentions by the security institutions in the predominantly Muslim republic followed a series of requests for gay-parades sent in March by the LGBT activists to the authorities of several cities in the Caucasus. None of the requests were satisfied, but this information inspired a number of anti-gay protests in the region.Spokesman for the head of the region, Alvi Karimov, was quoted as saying there was no gay community in the republic, adding that if there were gays in Chechnya 'there would be no problems with them, as the relatives would send them to the destination with no return.'Not if Israel's LGBT community has anything to say about it.For more information or to contribute, visit https://www.glbt.org.il/ .Reuters contributed to this report.