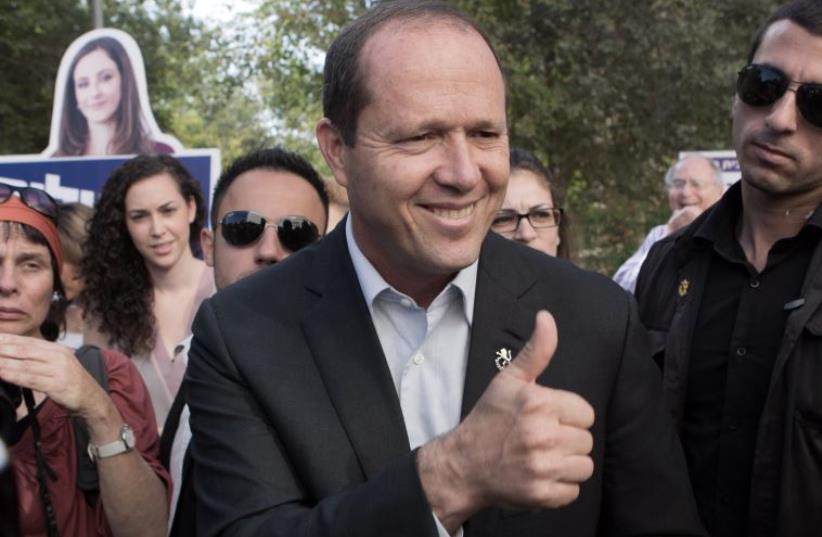 Nir Barkat
(photo credit: MENAHEM KAHANA / AFP)
Advertisement
Jerusalem Mayor Nir Barkat used his hands on approach once again to restore peace in the capital on Sunday morning when he broke up a traffic-related street fight while pedaling on his bicycle to work. According to a municipal spokeswoman, the mayor was cycling from his home to his office in Safra Square, when he saw two men hitting each other on a traffic island in the center of the road near Sacher Park. “The mayor stopped riding his bike and jumped to separate the two to ensure no one else was endangered,” the statement said. “After separating the men, he called for police reinforcement, and stayed on the scene until they arrived.”Sunday’s incident marks the second time this year that Barkat personally intervened during a violent altercation in the capital. In February the former war hero made international headlines when he tackled a knife-wielding terrorist and helped pin him to the ground until his security detail placed him under arrest.
Jerusalem Mayor Nir Barkat"s security detail apprehends Palestinian terrorist
A surveillance video showed the Mayor tackling an Arab terrorist who stabbed a haredi man seconds earlier and then wildly attempted to accost passersby near the capital’s City Hall.The video, showed the suspect, identified by police as a 19-year-old Palestinian who entered Jerusalem without authorization, swinging a knife at bystanders after initially stabbing a 30-year-old ultra-Orthodox man at a junction in IDF Square.Moments later, Barkat was seen rapidly and determinedly walking toward the suspect, as two members of his security detail ran to catch up to him. When one of the bodyguards drew his pistol, the suspect dropped the weapon and Barkat tackled him to the pavement.