Lauder: “This partnership between the Israeli and Chinese economy is an important development in the relationship between China and world Jewry.” 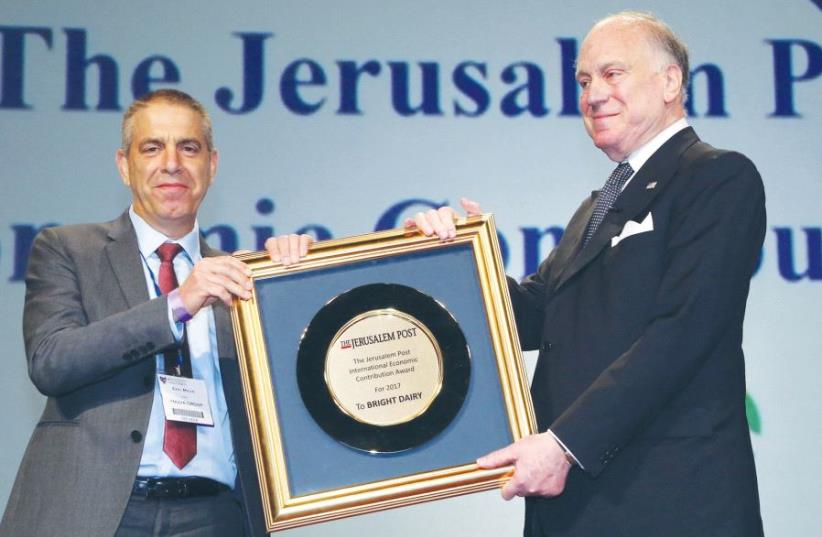 RUSALEM POST Conference President Ronald S. Lauder (right) presents Tnuva CEO Eyal Malis with the title of ‘Most Significant Contribution to the Israeli Economy,’ which Malis accepted on behalf of Bright Dairy chairman Chongjian Zhang
(photo credit: SIVAN FARAG)
Advertisement
The Jerusalem Post awarded Bright Dairy chairman Chongjian Zhang the title of the “Most Significant Contribution to the Israeli Economy” at the paper’s annual conference in New York on Sunday for Bright Dairy’s investment in the Israeli food company Tnuva.The award was given by World Jewish Congress President and Jerusalem Post Conference President Ronald S. Lauder to Tnuva CEO Eyal Malis, who accepted the award on Zhang’s behalf.“The Jewish world is grateful to Chongjian Zhang and Bright Dairy for its investment in the Israeli economy and its desire to turn Israel’s leading food company, Tnuva, into a global brand with an international presence in China, the United States and beyond,” Lauder said.“This partnership between the Israeli and Chinese economy is an important development in the relationship between China and world Jewry,” he added.“On behalf of Bright Dairy and the Bright Food Group, and Bright Dairy chairman of the board of directors Chongjian Zhang, I would like to thank The Jerusalem Post for this award,” Malis told the audience. “The chairman has asked me to declare that Bright Dairy is fully committed to advance its business interests in Israel and promote its interests in its economy. Bright Food believes in Tnuva, and Tnuva believes in Bright Food.”“It’s my distinct honor and pleasure to announce that this year’s Jerusalem Post Award for the Most Significant International Contribution to the Israeli Economy is being given to chairman of Bright Dairy and Tnuva, Chongjian Zhang, for his visionary work on turning Tnuva into an international corporation,” Jerusalem Post editor-in-chief Yaakov Katz said when introducing Malis. “Its products will be distributed across the globe, in Israel, China and the United States.”This past March, Jerusalem Post Group CEO Ronit Hassin-Hochman met with Zhang to inform him of the decision to present Bright Dairy with the award at its annual New York Conference.Just this year, Bright Dairy approved an NIS 400 million investment in Tnuva, demonstrating its long-term dedication to supporting the company, despite a market rife with challenges.“We choose to stay in the company. Our attention is devoted to Tnuva’s future, and we are strategic investors for the long term,” Zhang said previously.Last year, the Post bestowed the award to Mobileye, which then skyrocketed to international acclaim when it was acquired by Intel in March for a whopping $15 billion.