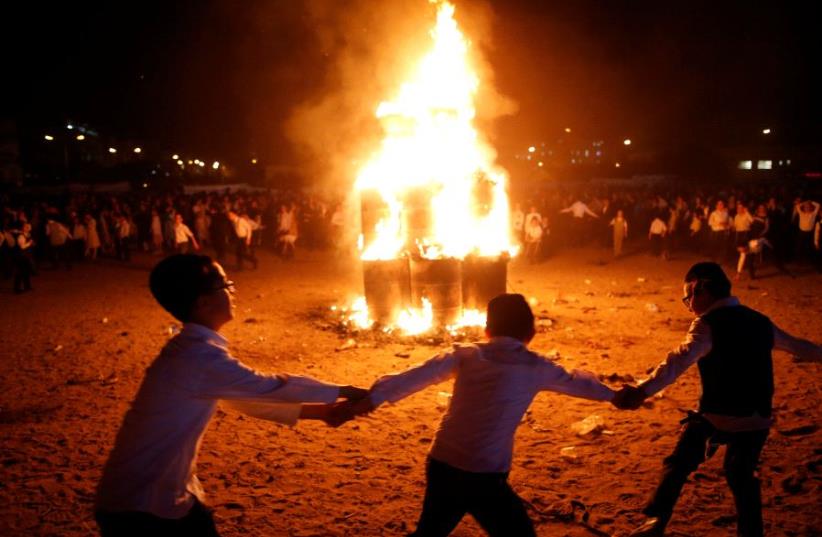 Ultra-Orthodox Jewish boys dance around a bonfire as they celebrate the Jewish holiday of Lag Ba'Omer in the city of Ashdod, Israel May 13, 2017
(photo credit: REUTERS)
Advertisement
After Israelis kindled Lag Ba’omer bonfires for the second night in a row on Sunday, air-pollution levels climbed to up to 10.9 times greater than typical values in areas around the country.The nation’s skies filled with a black smoky fog throughout the night, contaminating the air with particulate matter that can negatively impact the respiratory system, according to the Environmental Protection Ministry.While some people lit fires at the originally scheduled time for the holiday, Saturday night, most did so on Sunday night after the Lag Ba’omer school holiday was moved from Sunday to Monday.Air-pollution levels reached their peak between late night Sunday and 4:30 a.m. on Monday morning, the ministry said.One of the most problematic consequences of the bonfires each year is the marked increase in the concentration of PM2.5 – fine particulate matter with a diameter of 2.5 microns or less, the ministry said. Although levels of PM10 – particulate matter with a diameter of 10 microns or less – also rose, the finer 2.5-micron particulate matter is capable of passing into much smaller airways in the human body, the ministry warned.Levels of PM2.5 rose to 10.9 times higher than those on an average clear day in Jerusalem’s Beit Hakerem neighborhood, 9.9 times higher in the central moshav of Bnei Darom, seven times higher in Ashdod, 6.7 times higher in Gedera and 6.6 times higher in Bnei Brak, ministry data showed.Levels of PM10 were 8.9 times higher than those on an average clear day in Rehovot, 7.5 times higher in Tel Aviv’s southern neighborhoods and 4.4 times higher in Beersheba, the ministry said.