The Israeli Air Force has been flying DC-3s since the War of Independence. 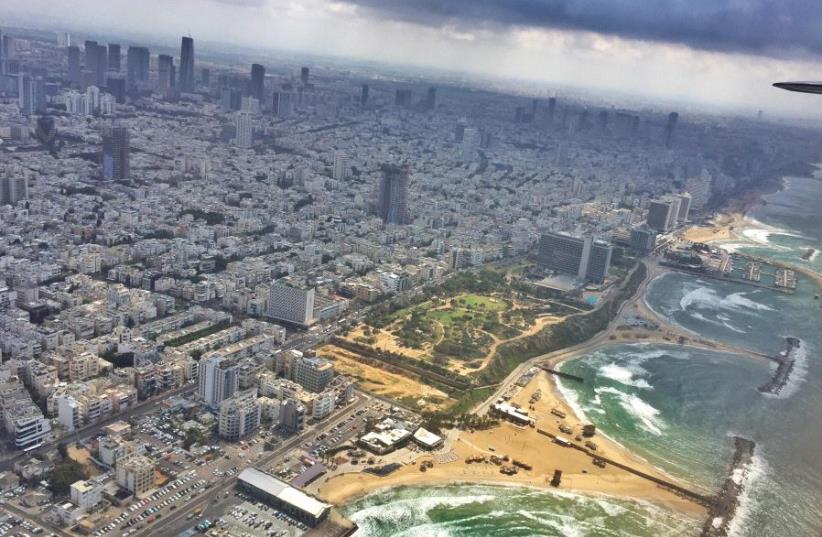 Tel Aviv as seen from the DC-3
(photo credit: ANNA AHRONHEIM)
Advertisement
Three legs into its record-breaking world tour, Breitling’s 77-year-old DC-3 landed at Ben-Gurion Airport on Tuesday for its first Middle East stop on a world tour.The Douglas DC-3 began its tour in Geneva and will be flying across the world, landing in 28 countries at 55 different airports between March and September 2017. This effort is not only to promote the company’s special edition Navitimer watch, but to “share the company’s passion for aviation,” Capt. Franceso Agullo said.“I am very excited to be here in Israel with this historic aircraft,” Agullo said, adding that “we choose the cities and countries where the plane will touch down not only due to their importance to the Breitling brand, but for the affinity and connection that the Dakota DC-3 has with them, such as the State of Israel.”The Breitling plane took to the skies of Israel for a short 30-minute flight that began over Rishon Lezion before heading toward the coast and flying past Jaffa and Tel Aviv, then continuing over Herzliya, Petah Tikva and several other towns in the Hod Hasharon region.
DC-3 plane flies over Tel Aviv as part of Breitling World Tour on March 14, 2017 (Credit: Anna Ahronheim)
After the plane touched down on the tarmac, Agullo told The Jerusalem Post that, while he has flown to Israel many times as a commercial airline pilot, to fly over Israel in a DC-3 is “incredible.”While the weather was a bit bumpy, “we flew so low over these cities, 1,000 meters or 3,000 feet. That is something you don’t do as a regular airline pilot. It was incredible, a wonderful flight,” he said.After departing Tel Aviv the DC-3 will land in Amman before continuing to Kuwait, Bahrain, and Dubai before charting a flight path towards Pakistan, India and Bangladesh. It will then head to Asia with stopovers in Thailand, Malaysia, Singapore, the Philippines, China, Taiwan and Japan.The plane will stay in Japan for a month to take part in several air shows before crossing the Pacific Ocean to embark on the North American leg of the journey, which is set to last two months in the US and Canada.Agullo said he wants to be able to “help children dream and will be sharing this adventure” with schoolchildren during stops in India and Japan who lost their parents during the deadly 2011 tsunami.The world tour, which will take the legendary plane across some 42,000 km and will last 230 flight hours, will end at the Breitling Sion Airshow 2017 back in Switzerland.“This DC-3 has 74,500 flight hours and is the oldest aircraft ever to circumnavigate the Earth,” Agullo noted, adding that “very few planes have that many hours and are still flight worthy. This plane has a great history with many stories to tell.”The plane taking part in Breitling’s world tour had its first flight on March 9, 1940 under American Airlines, until it was commissioned by the American military between 1942 and 1944. After the war it returned to commercial aviation and was retired from service in 1988. In 2008, Agullo and a number of friends bought the legendary plane and fully restored it and now it flies under the Breitling colors and appears in a variety of air shows.The first DC-3 flew in 1935 and by the time production ended in 1945 there were more than 10,600 in service, making it one of the most-produced aircraft of all time.The DC-3 was one of the most popular commercial aircraft, flying more miles and carrying more passengers than any other aircraft due to its reliability and safety.In the late 1940s, Israel obtained several DC-3 (known here as Dakotas), using them in every war fought by the Jewish state. It played a major role during the War of Independence, including bombing the Syrian capital of Damascus. During the course of the war the Dakotas attacked on all fronts, from Damascus to Quneitra in the North to Gaza, Beersheba and Eilat (Operation Uvda) in the South and Falluja in the East.The IAF was not the only air force using the DC-3: the first Israeli air battle, which took place over the skies of Tel Aviv, saw Israel’s first fighter squadron down two Egyptian DC-3s on June 3, 1948.During the Sinai Campaign in 1956, a squadron of 16 Dakotas took off from Tel Nof and flew at 150 meters above the ground before dropping 495 paratroopers from the 890th battalion to secure the Mitla Pass. It was the largest paratroop drop ever carried out by the IDF and the last time a paratroop battalion jumped into combat.The Dakota DC-3 also flew during the Six Day War, the Yom Kippur War and during the IDF’s presence in Lebanon, where it flew over southern Lebanon broadcasting a wide range of frequencies in order to detonate explosive devices planted by militants on the ground.Today there are fewer than 150 DC-3s in flight worthy condition worldwide, with several continuing to fly in the Israel Air Force, a workhorse used as a second-line transport.As pilots say, the only replacement for a DC-3 is another DC-3.