Special from India: Modi's policies will continue to disrupt and change Nehru-Gandhi consensus on foreign policy, courtesy of his personal and impersonal network. 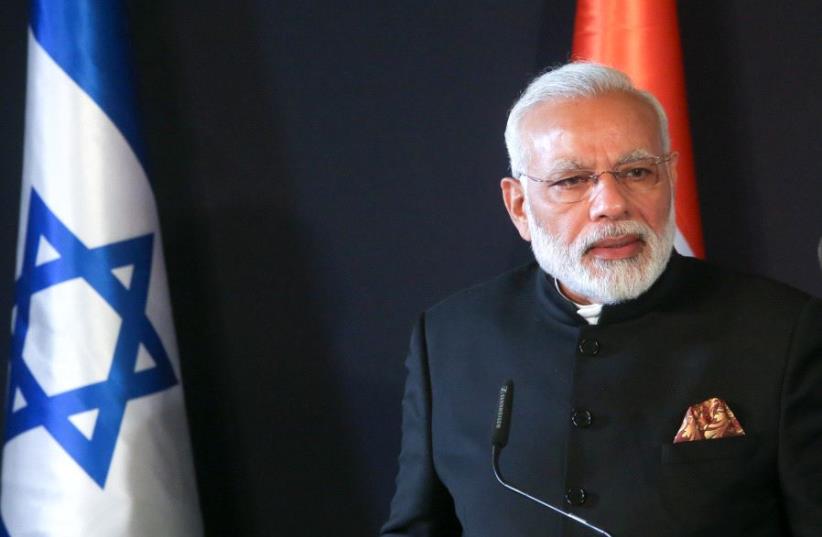 Indian Prime Minister Narendra Modi in Jerusalem, July 5, 2017
(photo credit: MARC ISRAEL SELLEM/THE JERUSALEM POST)
Advertisement
By engaging with Israel, Indian Prime Minister Narendra Modi, in one stroke, broke his country’s Nehruvian consensus about West Asia and ties with the Muslim world. Despite their intense relations, the policy of engagement with Israel was not acknowledged publicly in the past. Modi abandoned this narrative to recreate the relationship. He now has the advantage of a clear majority, an irrelevant Left, and  an ideologically marginalized Congress. It is this space that Modi continues to utilize by making bold decisions, both in national and international matters. Despite the rise of radical Islam, the Congress in its 10 years in power did not break the West Asian Nehru-Indira code because of legacy issues. Narendra Modi, on the other hand, has no such obligations, which gives him the freedom to navigate his country and the world through his own life experiences.Very few would recall that Modi, in a very famous debate, snubbed the television panel by saying that it took India 9/11 to use the word "Islamic terrorism," something his countrymen, otherwise, could not do by themselves. He also added that this reality needs to be acknowledged by Indians as well. Even though Vajpayee was then the prime minister of India, Modi’s vision of the international order seemed more candid. It not only reflected his vision, but also Modi's upbringing through the rank and file of the Sangh Parivar.The notion of young nations and old civilizations should also be read into seriously. Modi maintains the same line for domestic politics and says that India, as a nation, evolved in multiple directions because of migration but at the same time, retains core ethical sensibilities based on ancient civilizational heritage. He uses the terminology “indic” and “the heart of Indianness” with a definite purpose. This sensibility reflects in all of Modi’s speeches--both domestic and international. It leaves the “medieval” as a period when sensibilities tied to the land got subdued because different ethnicities , from Afghanistan and beyond, created kingdoms for themselves in the subcontinent.The same goes for Israel, which despite being a multi-ethnic society and a melting pot of races, today is identified as a nation with deep roots in an ancient past, negating the course of medieval history. It also includes a shared conviction that both lands belong to the respective communities because it is the only place they have in the world. Israel for Jews and India for Hindus. The minorities have a place but the country's umbilical cord remains tied to the original inhabitants who during medieval time got culturally and politically subjugated. Both visions are historically contested and create core-values around which national interest thrives. Lastly, Israel fought its way to the present and continues to battle Islamic terrorism.A certain section of the Indian political circle dreamt and hoped that Israel would defeats its enemies in the particular circumstances, the reason being that Israel's example could then be replicated in India. The essence of the notion is the belief that a strong nation is forged through ‘public sacrifice', stealth and force. It is this common ideology that brings India and Israel together.Barring Kashmir, Vajpayee did not leave any foreign policy doctrine. Firstly, he did not have the numbers. Moreover, he never publicly acknowledged the diplomatic breaks he achieved by not offending the embedded foreign policy sensibilities, lest it invited a united opposition. Modi, on the other hand, not only changes the Nehru-Gandhi ownership around defense and foreign policy but also politically consumes it and contrasts it with the older order, presenting it as archaic and without utility in the new world. It is for this very reason that both surgical strikes and  his visit to Israel need to be seen together. Such strikes were common during UPA, but Modi changed the game by announcing them.Similarly, 25 years of full diplomatic relations is an incidental reason for this paradigmatic shift in the policy towards Israel. This shift comes with Modi becoming politically stable and the opposition in India becoming very weak. It gives Modi the bandwidth to take bold foreign policy decisions that are based on the ideological locus of the Indian organisation he grew up with.His policies will continue to disrupt and change Nehru-Gandhi consensus on foreign policy, courtesy of his personal and impersonal network. Modi continues to challenge the imprints of the Gandhi-Nehru dynasty in various aspects of the government. Israel is one statement of it.The only difference is that, Israeli Prime Minister Benjamin Netanyahu personally shares the excitement and Narendra Modi has responded positively. Other collaborations will continue but Modi’s bold step of making Israel its most trusted alliance in West Asia is something Congress or the left would have never allowed because of its historical investments that pointed in the other direction.The author is the political editor of the India Based WION Network