The early Zionists were as ambitious and visionary as America’s founders. 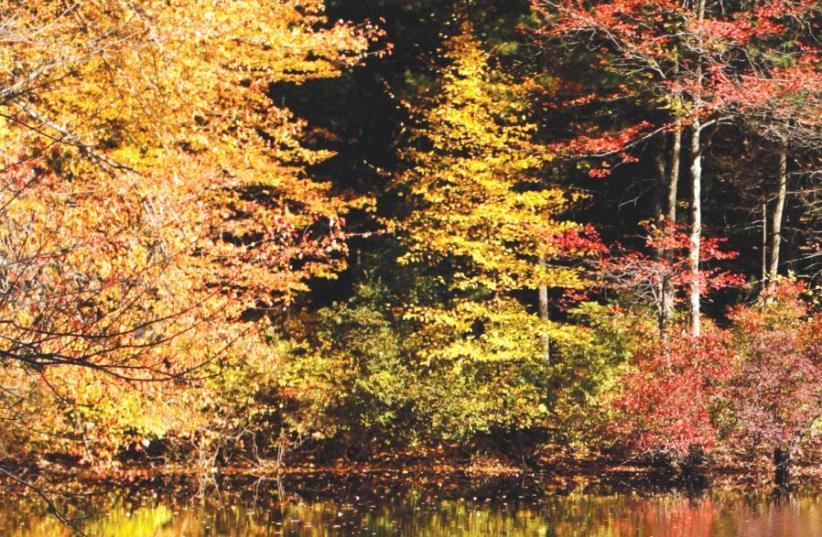 Fall foliage is reflected in the water at Walden Pond in Concord, Massachusetts October 14, 2009
(photo credit: REUTERS)
Advertisement
On July 4, 1845, the United States of America celebrated its 69th birthday. Most Americans enjoyed what they quaintly called “a national Sabbath.” As bells pealed and celebrants shouted “huzzah,” two significant events occurred.First, shortly after admitting Florida as a state just months earlier, Congress accepted Texas into the Union. That act – one more step in fulfilling what editor John L. O’Sullivan that year called America’s “manifest destiny” – triggered two wars. Within a year, the Mexican-American War erupted over Texas, which led to the occupation, er, annexation, of California – and much of America’s southwest. Southern attempts to expand slavery into these new territories ultimately triggered a better-known catastrophic, war – the Civil War – 15 years later.That same anniversary day, Henry David Thoreau took one of the most famous walks in American history, a mile-long journey to his cabin on Walden Pond. There, cocooned in the woods, Thoreau’s “experiment in simplicity” began. Even in those simpler times, some Americans already craved a return to nature. While Thoreau believed “every walk is a sort of crusade,” he couldn’t imagine the different crusades his walk, his example, and the book Walden that he would eventually write, would inspire. Some believe that walk launched America’s environmental movement. Some view it as a critical moment in the constant, contrapuntal, search for sanity, for modesty, for plainness, in our ever-more technological, pressured, rococo world. Others, more broadly, situate Thoreau in the broader sweep of geniuses, skeptics, critics, dissidents who “Think different,” in the words of the 1990s’ Apple computer ad campaign.While celebrating Israel’s 69th birthday – with the unforgettable Prime Minister Benjamin Netanyahu leading (rather than the eminently forgettable John Tyler) – this historical interlude teaches four important lessons.First, 69 might be approaching “golden age-hood” for people, but it remains adolescence for a nation. America then was very much in formation – still debating deepening its original sin, slavery.Second, those who try delegitimizing Israel by saying its borders are not settled should remember the USA circa 1845. Two critical states, Texas and Florida, had just joined. The Mexican cession was in the future. As with teenagers, turbulence in young countries can reflect creativity, dynamism, positive growth, not just stress and distress.Third, you never know who or what will make history. Most short walks are eminently forgettable; Thoreau’s wasn’t. Ultimately, 50 states joined the United States. Yet the admission of Texas, by triggering these two wars, was America’s single most earth-shattering state admission.Finally, this republic in formation, this grand experiment in liberal democratic nationalism, had a long way to go before becoming the cohesive nation it is today – even amid US President Donald Trump’s era of polarization.The comparison is helpful because both the United States and Israel were forged by impressive collective acts of will in a burst of idealism that skeptics dismissed as delusional. Both countries were bold experiments seeking to correct some of Europe’s fundamental flaws. Both countries mixed Biblical millennialism with modern messianic progressivism. Both welcomed immigrants from across the globe speaking different languages, rooted in different cultures, but often sharing common dreams. Both countries had to be pluralistic enough to respect group difference but patriotic enough to unite nationally. Both countries were democracies, relying on a voluntary compact, consent of the governed, and intangibles such as patriotism and communal idealism to galvanize the citizens – during good times and bad. Both new countries needed to undergo a period of nation-building through the state and independent of the state after the state began.Identity is malleable, be it national or individual. Just because national identity is a social construct does not mean it is completely artificial. Constructive liberal nationalism – be it Americanism or Zionism – should be rooted in a real past, offering something tangible in the present, and feeding hope for the future.The early Zionists were as ambitious and visionary as America’s founders. Zionism sought a Nietzschean “transvaluation of values” to something positive. Israel’s founders and America’s would agree with the American educator and nationalist Horace Mann. It often seems to be an easy to thing to make a republic, Mann sighed, but a laborious thing to make republicans. Similarly, declaring the new Jewish State was easier than forging a new Jew.Underlying these visions is the biblical concept: not by might nor by power but by spirit is history made – and greatness achieved. To Israelis forced to defend themselves repeatedly over the decades, this lesson reinforces faith in vision, ideals and morale – not just military and economic might. It explains why we must foster a constructive liberal nationalism, not decree it by undemocratic laws, why we must be a Values Nation.On Independence Day, as the nation kindles torches and individuals light barbecues, as we sing our national anthem about being a free nation in our homeland, let’s also trigger a nationwide conversation about our Zionist destiny, defining who we are, what we stand for, and who we wish to become. As we build toward Israel’s 70th anniversary, let’s not just sing about being free and at home. Let’s dream Texas-size dreams about our future while launching our own small-yet-big, simplifying yet revolutionizing Thoreau-like walks-that-become-crusades. Let’s rededicate ourselves to our manifest destiny, our Jewish mission of creating a safe, thriving, Jewish democracy in the Middle East, reminding the West about tradition’s power while reminding the East about freedom’s blessings.The writer, a distinguished scholar in North American History at McGill University and a visiting professor at the Ruderman Program at the University of Haifa, is the author of The Age of Clinton: America in the 1990s. His next book will be The Zionist Ideas: An Update of Arthur Hertzberg’s Classic Reader. Follow on Twitter @ GilTroy.