NGO calls on public to visit mourning for Simcha Hodatov, killed after misidentified as a terrorist

Rabbis of Hodatov state reported sequence of events not in keeping with his character. 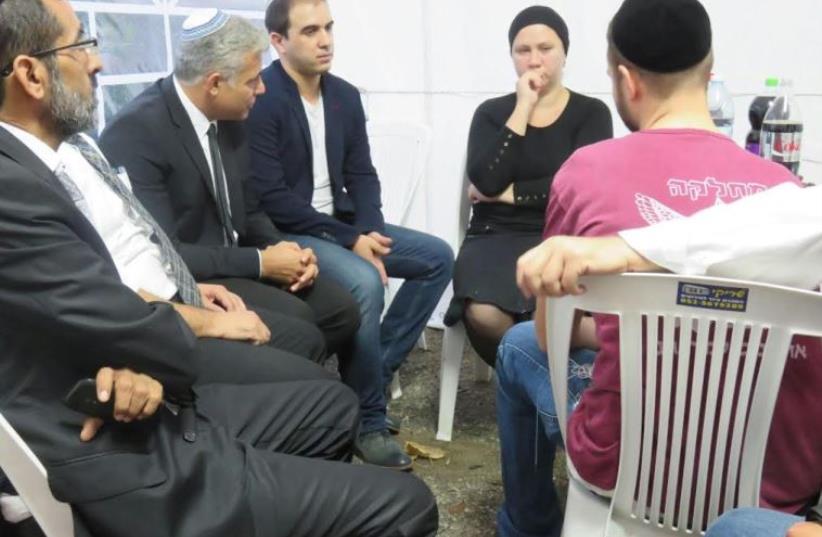 Yesh Atid chairman MK Yair Lapid at mourning house for Simcha Hodatov, killed after misidentified as a terrorist
(photo credit: NETZAH YEHUDAH)
Advertisement
The mother and sister of Simcha Hodatov, who was killed last week in Jerusalem in a misunderstanding by two soldiers and a security guard who misidentified him as a terrorist, have almost no visitors to their mourning house in Petah Tikva, an NGO close to the family has said.Hodatov immigrated to Israel from the Russian federal republic of Dagestan in the Caucuses, while his mother and sister have been in the country only for a short time.The NGO, which established the IDF’s Netzah Yehuda Battalion for haredi soldiers in which Hodatov served, issued a call to the public on Wednesday to pay their respects to Hodatov’s family in light of the lack of comforters for his mother and sister.“The mother who came to Israel only a few weeks ago, and the sister who is in the preliminary stages of applying for citizenship, are sitting shiva alone at their home with almost no comforters,” said Maj.-Gen. (res.) Yonatan Baranski, the director of the Netzach Yehuda NGO.“They, like us all, don’t understand what happened to Simcha and how and to where they continue from here,” he added.“The family is in mourning and in great shock... We will give Simcha’s family all the help and support they need... It is important at this time to embrace all those who lost loved ones and to help them, especially when dealing with new immigrants.”Hodatov immigrated to Israel 10 years ago and studied in the Dvar Yerushalayim yeshiva in Jerusalem’s Har Nof neighborhood. He subsequently enlisted in the IDF and served as a combat soldier in the Netzah Yehuda Battalion.After his military service he began work as a security guard at a kindergarten in the capital, and he was still working in this position when he was killed last Wednesday night.Hodatov mother and sister are observing the seven-day period of mourning at 77 Pinsker Street, Petah Tikva, until Sunday.Rabbis familiar with Hodatov from his time at the Dvar Yerushalayim yeshiva have expressed skepticism about the circumstances surrounding his death across the street from the Jerusalem Central Bus Station and the claims by the police that he shouted, “I am ISIS,” and tried to grab a gun from one of the soldiers who question him.According to the initial police report, when Hodatov got off the bus, two soldiers who were getting on thought he was acting suspiciously and asked him to identify himself. When he refused, the police later stated that he shouted, “I am ISIS!” and lunged at the soldiers to try to take a gun from one of them. The bus driver then administered an electric shock to Hodatov, who persisted in his efforts to grab the gun, whereupon he was shot by a security guard who was at the scene of the incident and by the soldiers themselves, police said.Rabbi Menachem Goldstein, an educator and administrator at Dvar Yerushalayim, said the sequence of events as described by the police did not fit Hodatov’s character.Goldstein described Hodatov as a stable, quiet man who was not aggressive and sought to avoid confrontation. The rabbi said that Hodatov knew how to handle himself if someone was violent with him, and was trained in a discipline of martial arts, but that he had never been violent during his entire time at the yeshiva.Hodatov visited the yeshiva for the Shabbat before the incident in which he was killed, and the rabbis present during Shabbat had said that they had not seen any untoward behavior by him.“The way the events have been described about how Simcha was killed do not fit in any way his character, it’s just not him,” Goldstein told The Jerusalem Post.He noted that Hodatov had a slight stutter when starting sentences and that it was possible any mention of ISIS may have been made as an indignant rhetorical question, not as a declaration.“We knew Simcha as a fine, emotionally healthy person with strong faith,” said another rabbi from Dvar Yerushalayim, Rabbi Ephraim Stein. “We knew him from the day he arrived from Kavkaz [the Caucuses] and joined the yeshiva to become a baal teshuva [to embrace Orthodox Judaism].He was a self-made man who took learning Torah seriously, and would often spend many hours in the study hall learning. He excelled in prayer, and displayed exemplary manners to the rabbis at yeshiva.”Responding to the call, Yesh Atid chairman Yair Lapid paid a visit to Hodatov’s mother and sister on Wednesday night.“Simcha volunteered to enlist to the IDF and to defend the citizens of Israel, and in these difficult times it is our duty to embrace the Hodatov family who have immigrated to Israel, and to give Simcha this last honor,” Lapid said, calling on the public to visit the mourning house.A police investigation is under way, and is being conducted by Jerusalem police in conjunction with the Jerusalem District Attorney’s Office, which are examining the actions of the security guard, along with IDF Military Police, which is investigating the actions of the soldiers.