Yochanan and Barbara Boterberg to receive emergency grant from International Fellowship of Christians and Jews to purchase basic necessities. 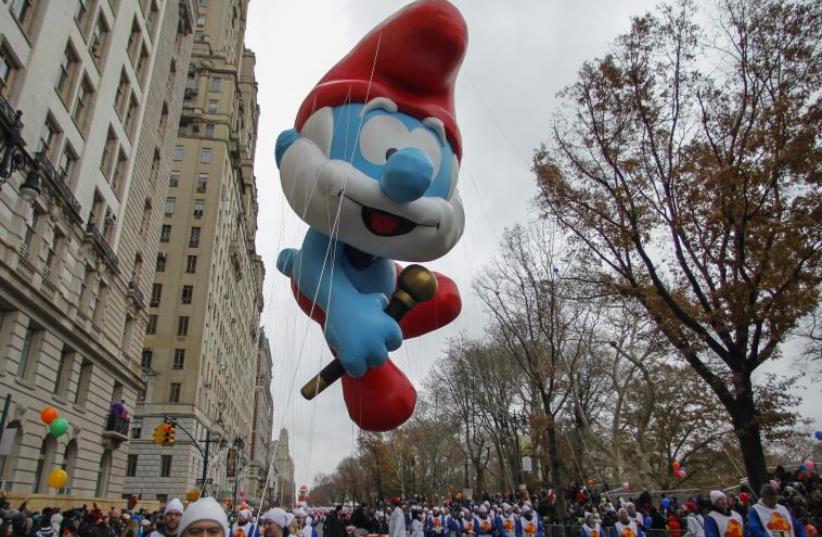 Smurf float in NY
(photo credit: REUTERS)
Advertisement
One of the original Smurf illustrators and his wife have lost their home and possessions to Sunday’s massive brush fire that swept through moshav Even Sapir, on the outskirts of Jerusalem.Yochanan and Barbara Boterberg have lived in Israel for more than 20 years on land owned by the Franciscan Monastery within the moshav.They had to evacuate their modest home – along with 700 other residents from the small hamlet – when flames got perilously close.It took more than 50 firefighting crews and eight fire services airplanes more than eight hours to contain the blaze, which destroyed several other homes and buildings in the moshav.Fire officials have since launched an investigation into the possibility of arson as the reason behind the blaze, which spread rapidly due to the high temperatures.When the couple, both in their 60s, were allowed to return after the fire was extinguished, their small one-bedroom residence was reduced to ash.Yochanan was one of the original illustrators of the popular Smurf cartoon series in the late 50s.He and his wife, both originally from Belgium, said that they had lost everything.“Not only did the house burn completely with all the things we need... it burned all of Yochanan’s paintings and drawings from the last 30 years. We don’t know what to do,” said Barbara. “For us, it’s quite a disaster.”According to Yochanan, who made a livelihood selling his now-destroyed portfolio of original art, the couple only had time to gather their passports, some money, a flute, and the clothes on their backs before fleeing the flames enclosing on the small community.For the time being, the couple has found temporary shelter in the monastery, but Barbara Boterberg said that they face an uncertain future.
(Yochanan and Barbara Boterberg)

“We’re in a desperate situation,” Yochanan said. “We need to start all over again.”While Barbara said she hopes the monastery will provide the couple with housing until January, she is uncertain if such an arrangement will be viable.To help them regain their footing, the International Fellowship of Christians and Jews said on Tuesday that it is providing the couple with an NIS 8,000 emergency grant from its Kupat Yedidut program.The program provides grants to 200 social services departments across Israel to help residents in crisis to purchase necessary products and basic services within 48 hours of making the request.In 2015, the organization said grants are expected to provide NIS 28 million to 25,000 families.The couple praised Rabbi Yechiel Eckstein, the founder and president of the International Fellowship of Christians and Jews, for providing the desperately needed funds, which they said they expect to receive in the coming days.“We want to thank Rabbi Eckstein,” said Barbara. “With the money the fellowship is giving us, we’ll buy a washing machine, a refrigerator, and the little things that every household needs.”
Advertisement
Subscribe for our daily newsletter