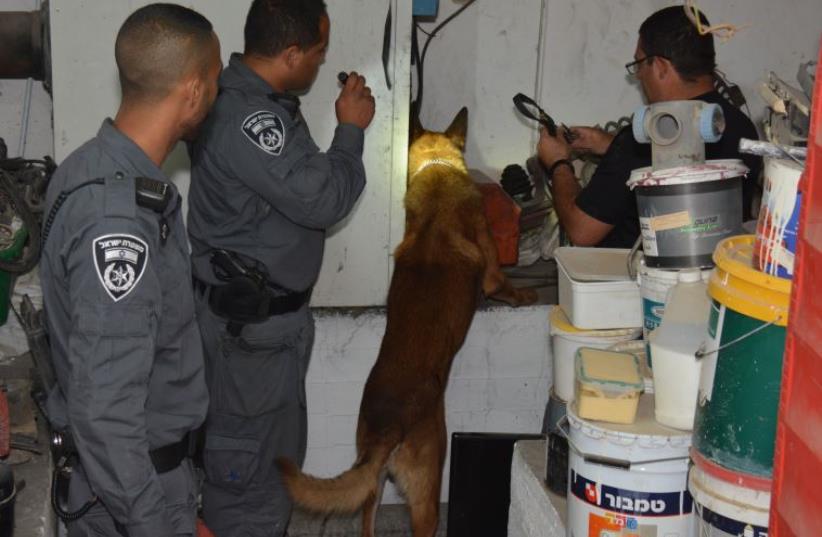 Israel police during a drug raid operation‏
(photo credit: ISRAEL POLICE)
Advertisement
Twenty-four alleged drug dealers were arrested in the north early Tuesday in an operation involving over 200 detectives, Border Police officers and a drug-sniffing canine.This follows a five-month covert and joint investigation carried out by an undercover agent.The suspects, accused of money laundering and selling large amounts of cannabis, Ecstasy and cocaine, were arrested in their coastal homes in Haifa, Nahariya, Acre, and the nearby Krayot Haifa bayside suburbs, police said.
Israel Border Police conduct drug raid in northern Israel (Courtesy of Police Spokesman’s Unit)
Due to a gag order, the amount of drugs seized was withheld.“Our undercover agent worked for nearly six months in the coastal region of the northern district, and after securing enough evidence all the suspects were arrested overnight in Haifa, Nahariya, Akko, and the nearby villages of Krayot,” said police spokesman Micky Rosenfeld.Rosenfeld commended the unidentified undercover agent for putting his life at risk to help garner the information necessary to procure warrants to make the arrests.“The district command expresses its appreciation to the agent for his activities, and emphasizes the importance of exposing the offense of drug trafficking, which is accompanied by violent crimes that harms the public’s personal safety,” he said.“Police operations will continue in different areas across the country to prevent drugs from reaching the streets.”The unidentified suspects were arraigned at the Haifa District Court on Tuesday afternoon, where a judge ordered their remand amid the ongoing investigation, Rosenfeld said.