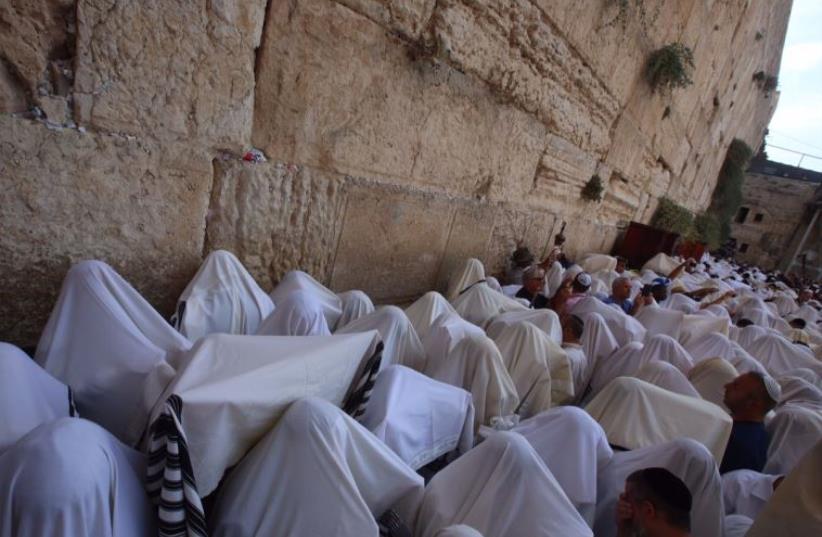 Priestly blessing prayer service at Western Wall, september 30, 2015
(photo credit: MARC ISRAEL SELLEM/THE JERUSALEM POST)
Advertisement
The relaxed and convivial atmosphere of the Succot holiday was very much in evidence in the Old City of Jerusalem and the Western Wall on Wednesday morning, as some 50,000 people flocked to the Kotel for the biannual Priestly Blessing, recited there en masse during the intermediate days of Succot and Passover.Israelis from across the country, along with large numbers of foreign tourists, including many Christian pilgrims, converged in their thousands on the Western Wall plaza to witness the spectacle of the blessing and to “ascend” to Jerusalem, as is traditional on the three pilgrimage festivals of Passover, Shavuot, and Succot. 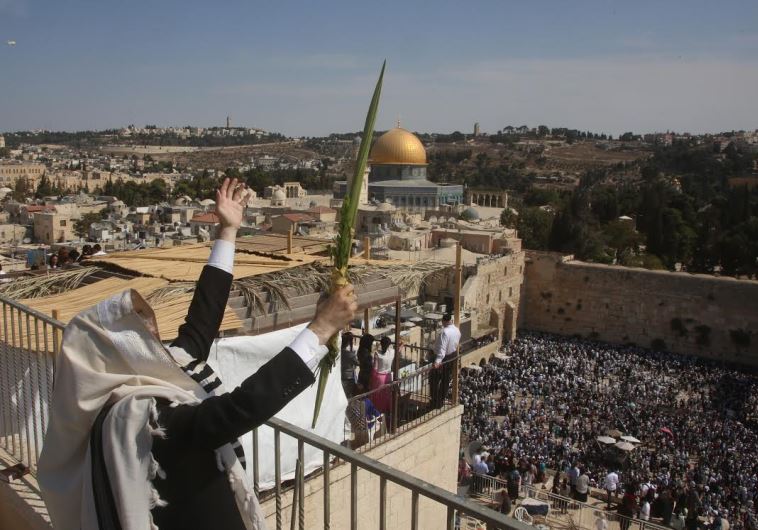 Despite the ongoing violence in Jerusalem and the West Bank, and recent rioting on the Temple Mount, visitors to the Old City seemed mostly unconcerned about security issues. Several who spoke to The Jerusalem Post said that they did not take the issue into consideration when deciding to come to the Western Wall.However, the reported number of pilgrims was significantly lower than during Passover this year, when there were a reported 75,000 people, and the Succot holiday in 2014, when there were some 80,000.Chief Rabbis David Lau and Yitzhak Yosef were both present at the ceremony, as was Rabbi Shmuel Rabinowitz, the supervisor of the Western Wall.Deborah Kirshner, from the Jerusalem neighborhood of Romema, said she felt “very joyful and very grateful to be coming here on Succot.” Acknowledging the recent violence, Kirshner said that “We know there are tensions, but we encourage everybody to come. I know about the riots but I’m not afraid to come and I feel comfortable coming.”Katey Moreland from Ireland, who is in Israel for three months and staying in the Old City close to Jaffa Gate, said she felt absolutely safe.“Instead of being fearful when I heard that trouble might be coming, I was rejoicing, and I said to myself, ‘See how God has sent me to pray and that my prayers will make a difference because of Gods grace,’” she said. “And so I’m joyful to be here with the people of the land, with the Jewish people.”Peggy Wollberg, from Illinois, said that she was keenly aware of the security situation but had come to Israel specifically for Succot regardless.“That [violence] was at the forefront of my mind, but it didn’t stop. I came in spite, because God called on Christians to bless the people of Israel, that’s why we’re here. We came to be part of your celebration of Succot.”Raphy Kaplan brought his family to the Western Wall from the settlement of Ofra where they live and said he had no compunctions about coming despite the recent unrest.“We feel that the power of the Jewish people and its connection to Jerusalem has no comparison in the history of nations,” said Kaplan. “We are a people who for so many years dreamed about returning to its homeland and its heart, which is in Jerusalem, and we pray to Jerusalem and think about Jerusalem the whole time.”Kaplan also decried the Arab riots on the Temple Mount and violence in east Jerusalem, as well as incitement against Israel over Jewish visitors to the Temple Mount. He cited in particular Palestinian Authority President Mahmoud Abbas’ recent comments when he said, “Al-Aksa is ours and so is the Church of the Holy Sepulchre. They have no right to desecrate them with their filthy feet.”Said Kaplan, “The Jews thought the Arabs would appreciate our respect for their holy sites, and would likewise allow us finally to return to our holy places. Instead of this their president says that Jews dirty [Muslim] holy places with their feet.”Along with the tens of thousands who visited the Western Wall were 670 visitors, including 420 tourists and 250 Jews, who went up to the Temple Mount on Wednesday.Much of the recent Palestinian violence and rioting has stemmed from the objection of the Palestinians, Jordanians and others against Jewish visits to the Temple Mount, which has increased significantly in recent years According to Temple Mount activist Yehudah Glick, the visits on Wednesday passed off peacefully and quietly for the most part, although five Jewish visitors were detained. These included far-right activist Itamar Ben-Gvir for allegedly calling out “the Jewish people lives” and another far-right activist, Prof. Hillel Weis for reading various biblical verses related to the Succot holiday. Any form of non-Islamic prayer or religious worship is banned on the Temple Mount.Glick said that, in relative terms compared to years past, access to the Temple Mount over Succot was greatly improved, since the police used to close the site to Jews whenever any rioting took place.“I want to praise Internal Security Minister Gilad Erdan and the police for this new attitude,” said Glick.However, he said that Jewish visitors were allowed up only very slowly and in groups of a maximum of 20 people, a situation which he said caused many people to wait for several hours before ascending, and some to give up and leave before they could get in.“There is no reason for this and it should be improved. There’s no reason that access for Jews shouldn’t be same as for all tourists.”Thousands more people were present at the Western Wall later in the day when four new Torah scrolls were installed at the site and the Hakhel ceremony performed.Hakhel was originally observed in the Temple following a Sabbatical year, when the Jewish people was commanded to gather during Succot to hear the Torah being read. It was reintroduced as a custom in the country in 1945.