Police remove residents who had locked themselves into the outpost's synagogue for hours in protest of the evacuation.

Forces evacuate Amona synagogue
(photo credit: MARC ISRAEL SELLEM/THE JERUSALEM POST)
Advertisement
The last battle for the Amona outpost occurred Thursday afternoon in the community’s synagogue, where some 100 protesters had barricaded themselves. Countering both violent and passive resistance, policemen had to carry out the youths one by one to the road outside, where they linked arms and refused to move.“You should be ashamed of yourselves,” one of the activists yelled at police from the ground. “Don’t you know that from here Arabs will carry out terrorist attacks against Jews?” The protesters chanted, “Soldier, policeman, refuse to carry out your orders.”
Israeli police evacuate Amona synagogue
Their removal from the synagogue and the road marked the end of the two-day operation by the Israel Police and Border Police to evacuate the small hilltop community of 40 families. 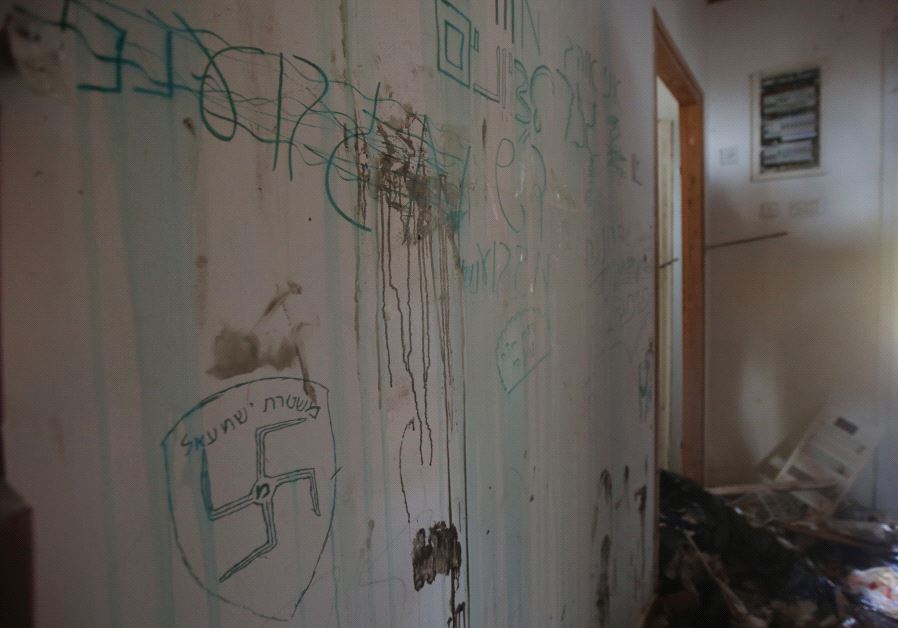 "They were met with strong opposition when they entered the building. Stones, fire extinguishers, bottles of paint, lumber and things were thrown at them," a police spokeswoman said. She later added that a few of the protestors had used pepper spray against the officers.Police reported that 60 of their officers had been injured since the operation began Wednesday. The NGO Honenu and MDA reported that at least 34 activists were also injured.More than a thousand teenagers had flocked to Amona on Tuesday to protest the outpost’s imminent destruction. Dubbed operation “Locked Garden” by the police, it was marked by sporadic clashes, of which the fiercest occurred in the synagogue.
Youth evicted from Amona flee evacuation bus‏
Activists had barricaded the doors and in some cases chained themselves to tables. Policemen carried them out via every opening in the building, including the windows and rooftop.The sound of police drilling their way into the building did not drown out the screams of the activists, who at times hurled slurs at them, such as calling them the “anti-Zionist” force. On the wall of the synagogue, they drew an Israeli police emblem with a swastika inside.The clashes between protesters and police continued even on the buses that were used to remove them from the hilltop. Teens yelled out the window to reporters next to the bus, “They are beating us.” One made a choking sign with his hand.In Ofra, with help of some of its residents, some of them were able to break the windows of the bus and escape.Speaking in Ariel, Prime Minister Benjamin Netanyahu urged nonviolence. “We are in difficult times. We made every effort to avoid reaching this moment, but ultimately we must uphold the legal order, because we are a law-abiding country,” he said. “All of you and I share in the great pain of the families who were forced to leave their homes and had to abandon their lives, and we all understand how great the pain is.”Public Security Minister Gilad Erdan rebuked the activists, saying, “Those barricading themselves in the synagogue are hooligans who deserve full condemnation.” Erdan accused them of “making a mockery of Judaism,” saying they had no respect for religion, the synagogue or rabbis. He later said that they had brought in iron bars, tires and other weapons to defend the building.It’s important, he said, to distinguish between the activists and the Amona community, as well as the residents of Judea and Samaria in general. Taking them off the hilltop, he said, was “heartbreaking.”Honenu, in turn, charged that it was the officers had acted violently toward the protestors, publishing a video which appeared to show a one policeman throwing a chair the young men.Police Commissioner Insp.-Gen. Roni Alsheich said there is a difference between the protestors and the Amona families, explaining that his officers had done their best to act sensitively and with patience toward the residents out of respect for the pain they were feeling.Border Police officers stayed in the outpost to prevent the theft of remaining property that belonged to the residents, most of whom have been temporarily relocated to the Ofra settlement. These homes will not be destroyed until the family’s belongings have been removed.The outpost was evacuated after the High Court of Justice ruled in 2014 that it must be taken down because it was built without permits on private Palestinian property.Next week, nine homes in the Ofra settlement must similarly be removed. Ofra residents are already planning to hold a demonstration in their settlement on Sunday against the pending demolitions.