As Netanyahu and his political rival Naftali Bennett of the Bayit Yehudi Party lock horns over who is truly the leader of the Israeli Right, Amona is the kind of hot potato no one wants. 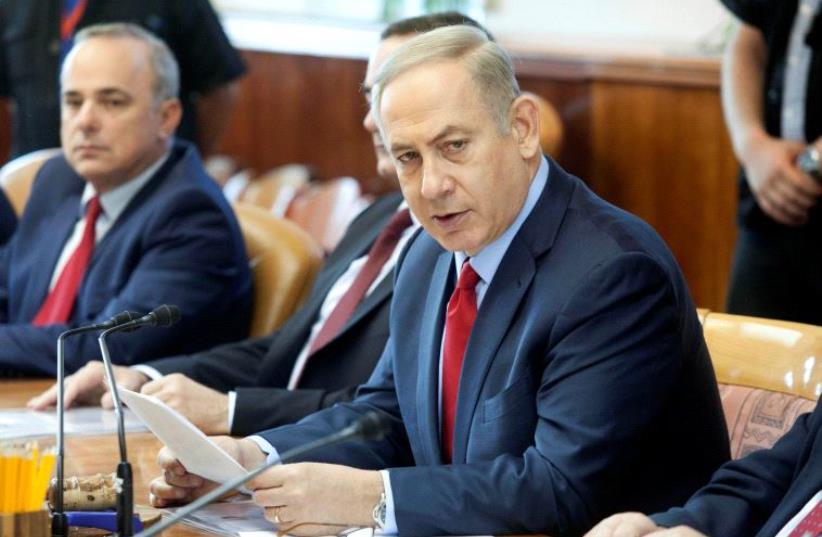 Benjamin Netanyahu
(photo credit: REUTERS)
Advertisement
Perhaps it was the rain or the fog.But with the guitar strumming and the singing, Amona on Tuesday night felt more like a winter campground for teenagers than a potential battleground.They flocked to the hilltop after the army blocked the roads in advance of Wednesday morning’s pending evacuation.It is hard to imagine that the political fate of Prime Minister Benjamin Netanyahu, or the settlement movement as a whole, could be decided based on the future of 40 modular homes stretched across a few one-lane roads on an obscure hilltop in the Binyamin region.But it was no coincidence that on Tuesday night Netanyahu in an unusual move announced the construction and advancement of 3,000 homes in West Bank settlements.The question of Amona’s possible evacuation has been a political football for so long and its story has so many legal twists and turns that it is almost impossible to imagine that in the end, bulldozers could bring it crashing down within a day. The outpost, built in 1995, is among the oldest of some 100 fledgling hilltop communities, built without authorization in the hope of one day becoming legalized communities.
Hundreds of teenagers that descended upon Amona to block any potential evacuation effort, 15.12.16 (credit Eliyahu Kamisher)‏
Amona’s location on private Palestinian property and the High Court of Justice ruling against it makes such a move impossible. It made settlement movement history in 2006, after the fierce clashes that occurred there when security forces demolished nine permanent homes. Then, like now, hundreds of teen activists streamed to the outpost to take a stand against a government that seemed to have turned against its own people.But in 2006, they were fighting a centrist government, led by former prime minister Ehud Olmert of the Kadima Party, who had already turned his back on what is considered by many to be an isolated area of the West Bank. Some 11 years later, almost to the day, the settlers are standing in front of a right-wing government led by a prime minister who has pledged not to uproot settlements.As Netanyahu and his political rival Naftali Bennett of the Bayit Yehudi Party lock horns over who is truly the leader of the Israeli Right, Amona is the kind of hot potato no one wants. Neither wants the responsibility for scenes of violent clashes and houses being torn down.Wednesday’s anticipated evacuation of Amona would not be the first time that security forces have demolished an entire outpost.Under High Court of Justice rulings, the Migron outpost and 30 homes in the Ulpana outpost were destroyed in 2012. But that was earlier in Netanyahu’s premiership, and he was in a stronger position politically.The issue of Amona comes at a time when Netanyahu’s rivals are circling, and when the smell of elections is in the air. But if he had hoped the swift action of security forces in surrounding Amona would stave off a forced evacuation, he was mistaken.It only took a few hours for the teens to make their way to the hilltop.He has only three ways out. The High Court of Justice could uphold a deal by which the settlers would agree to evacuate peacefully. He could try to find another way to persuade them to leave. But this is not the only evacuation on his plate. Next week, it is likely that security forces will have to move against some, if not all, of the nine stone homes in the Ofra settlement also under a demolition order from the High Court of Justice.A forced evacuation, in Amona or in Ofra, leaves him little choice but to come up with a grand move in relation to the settlements, such as his 3,000 unit declaration. Other steps could include the Knesset passage of the settlements bill, retroactively legalizing some 4,000 settler homes. Or it could be a deal he reaches with US President Donald Trump during their first meeting on February 15, maybe an agreement to continue to build and develop in the settlement blocs with his support.In the face of such a large gesture, the Amona homes might become legendary, but in that case they would have little impact on the larger political fortunes of Netanyahu or Bennett.