Netanyahu on Bennett rebellion: Do you want to break up the coalition? 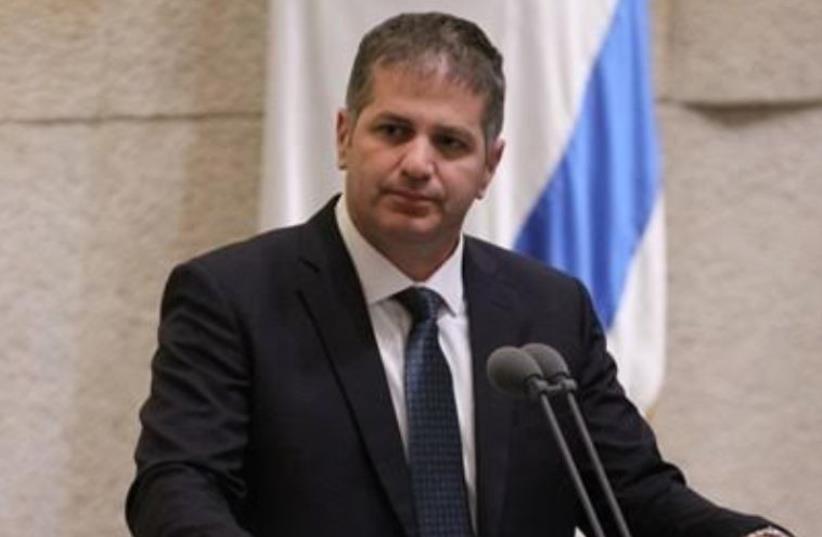 Likud MK Yoav Kisch
(photo credit: Courtesy)
Advertisement
Bayit Yehudi’s move to block all new legislation from approval because a Likud MK has been obstructing the other party’s bills will break up the coalition, Prime Minister Benjamin Netanyahu said on Sunday.Justice Minister Ayelet Shaked canceled Sunday’s meeting of the Ministerial Committee for Legislation, which determines the coalition’s stance on bills, because Knesset House Committee chairman Yoav Kisch of the Likud is obstructing the “Ariel University bill,” along with all others sponsored by Bayit Yehudi.In Sunday’s cabinet meeting, Netanyahu told Education Minister Naftali Bennett, leader of Bayit Yehudi, that this is not the way to behave in a coalition, according to sources in the closed-door meeting.“We are the most disciplined faction,” Bennett said, repeating a theme of his public statements about coalition infighting in recent weeks.“We don’t have any Azarias and Haskels,” he added, referring to MKs Rachel Azaria of Kulanu and Sharren Haskel of Likud, who have refused to support coalition bills for reasons of conscience.“If you want to break up the coalition, break up the coalition,” Netanyahu retorted.The Likud later put out a statement calling Bennett’s behavior “meant to make headlines...unnecessary and childish stubbornness,” and said Netanyahu supports the “Ariel University bill,” which will move forward soon.Last week, Bennett told Netanyahu that no laws would pass in the ministerial committee, of which Shaked is chairwoman, unless Kisch allows the “Ariel University bill” to pass.Shaked only allowed one bill to be voted on – Likud MK Sharren Haskel’s proposal that would save right-wing Channel 20 from closure – because it is time-sensitive.The “Ariel University bill” would have the Council of Higher Education law apply to the university, even though it is over the Green Line. Other non-university colleges in the West Bank would still fall under the jurisdiction of the Judea and Samaria Council for Higher Education.Although Kisch has been an outspoken advocate of applying Israeli laws to the West Bank, which the “Ariel University bill” would do to some extent, he has taken advantage of his position as House Committee chairman, presiding over all Knesset procedural matters, to block all of Bayit Yehudi’s bills.Bayit Yehudi faction chairwoman Shuli Moalem-Refaeli pointed out that Kisch is co-chairman of the Knesset’s pro-settlement caucus, saying: “The bill that will move academic institutions in Judea and Samaria to the Council of Higher Education’s regulation is stuck. It’s an important bill, one of many that the left has called ‘crawling annexation.’ Guess who’s blocking it? Land of Israel Caucus chairman Yoav Kisch.”Yesh Atid faction chairman Ofer Shelah lamented that, “important bills are waiting for the ministers to stop fighting, and for the coalition to stop politicking all the time. There is a price in time and the good of the citizens, but what does this government care?”The source of the dispute between Kisch and Bayit Yehudi is a bill changing the age of automatic custody for mothers of their children in cases of divorce.The law currently states that mothers get custody of children under the age of six in a divorce. Kisch, adopting a bill proposed by Social Equality Minister Gila Gamliel (Likud) before she became a minister, sought to eliminate automatic custody entirely and allow judges to decide who gets custody according to what’s best for the child. Some opponents of automatic custody argue that age six has become a deadline by which mothers try to get divorced, and that it reflects an outdated view on parenting.When Kisch’s bill came to a vote in 2015, several women in the coalition, including Moalem-Refaeli, refused to vote for it, saying it turns children into bargaining chips and weakens women’s standing in divorce proceedings, and that young children need greater stability in their lives.In May 2017, the Knesset passed a compromise version of the bill in a preliminary reading, which lowered the age of automatic custody to two. Then-coalition chairman David Bitan (Likud) said the final age of automatic custody would be determined by professional recommendations.The bill has not made any progress, with Kisch saying he would not allow automatic custody of children over age two, and Moalem-Refaeli pointing to Welfare Ministry representatives who think it should be at least up to age four. The Chief Rabbinate seeks to keep things as they are.Kulanu MK Rachel Azaria accused Kisch on Monday of trying to push his preferred version of the bill through against the coalition’s agreement to go according to professional assessments.“This move will hurt children who need stability during a traumatic divorce process,” Azaria said. “The Welfare Ministry’s stance is clear. A three-year-old needs one main parent and cannot wander between homes when parents don’t agree. I won’t let threats influence the legislative work and hurt children who need protection and stability.”Meanwhile, Kisch, who was supposed to move to the chairmanship of the Knesset Interior Committee, said he refuses to budge from the House Committee until the child-custody bill passes a first reading.A few years ago, divorced fathers organized a pressure group against the custody law, with hundreds joining the Likud since then.Moalem-Refaeli has received death threats from divorced fathers over her stance.