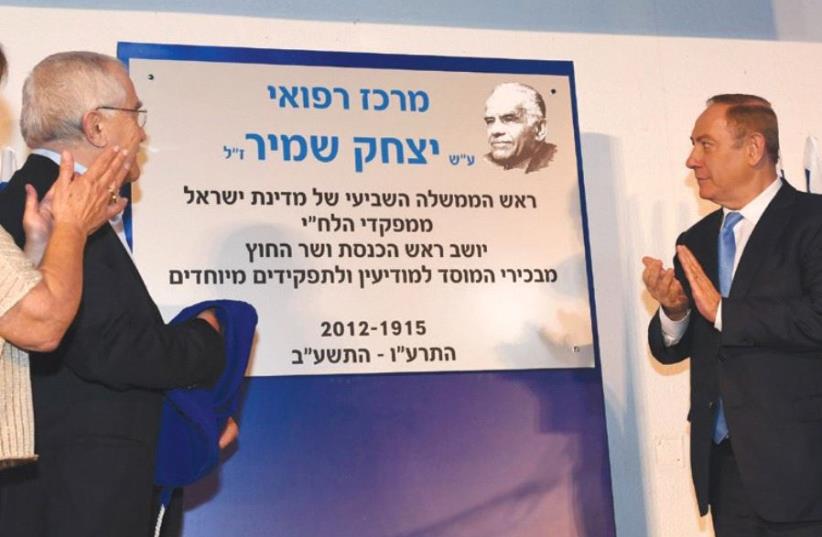 PRIME MINISTER Benjamin Netanyahu and Health Minister Ya’acov Litzman unveil the plaque for Tzrifin’s Yitzhak Shamir Medical Center yesterday, along with members of the Shamir family.
(photo credit: KOBI GIDEON/GPO)
Advertisement
Maintenance work on the Ayalon highway carried out in Tel Aviv last Shabbat and approved by the Transport Ministry has set the haredi political parties on the warpath once more, with Health Minister Yaakov Litzman threatening to topple the government over the issue. Last August, construction work on infrastructure in Tel Aviv on Saturdays became a severe point of contention between haredi parties United Torah Judaism and Shas and Transport Minister Israel Katz. Eventually an agreement was reached in which a joint committee was established to determine what construction projects were necessary to carry out on Shabbat and which were not. But the maintenance work undertaken last Shabbat on the Ayalon highway has raised the issue once again to the top of the haredi agenda. The Hamodia haredi newspaper reported on Tuesday that Litzman spoke with Prime Minister Benjamin Netanyahu on Monday and warned him that the haredi parties could bring down the government if construction on Shabbat continues.Litzman told the prime minister that preserving the status quo on religion and state regarding Shabbat was the primary demand of United Torah Judaism’s coalition agreement with the Likud, and insisted that state-mandated infrastructure work on the sabbath was included in the status quo agreement. “But there are government ministries who are making Shabbat like any other weekday. It’s important that they remember that if there is an issue that is likely to topple the government, it is Shabbat desecration,” Litzman told the prime minister, comments verified by the The Jerusalem Post. Shas chairman and Interior Minister Aryeh Deri has also weighed in on the controversy, protesting the recent construction and maintenance work during the Shas faction meeting on Monday and saying that he would bring it up with the prime minister.  In comments to the post, Litzman’s fellow UTJ MK Uri Maklev argued that as the nation state of the Jewish people, it was critical for the state to preserve the sanctity of Shabbat, even in situations where the haredi community is not exposed to its effects, as is the case with the maintenance work on the Ayalon highway.Maklev also opined that Katz’s argument that only non-Jewish laborers are used for such work was not relevant since religious law only permits employing non-Jews on Shabbat in limited circumstances, which were not applicable to infrastructure maintenance work. “Shabbat and brit milah are the foundation of the Jewish people so it doesn’t matter if we [ the haredi community] are exposed to the construction or not, our first obligation is to observing Shabbat… the state does not need to do construction work on Shabbat in situations which aren’t vital,” said Maklev. The MK said however that despite Litzman’s comments, he believed that a solution to the issue could be found without toppling the government. He also noted that the joint committee set up last year to determine which construction projects were necessary had “significantly reduced” the number of permits for construction on Shabbat, but added that the Transport Ministry continued to authorize construction of roads, bridges and tunnels on Shabbat which he said was not acceptable. A spokesman for the transport minister did not respond to a request for comment.