Israel and Cyprus downplay crisis in ties over Turkey reconciliation

Anastasiades flies to Israel on short notice, both sides deny problems in ties as a result of Israel’s reconciliation with Turkey. 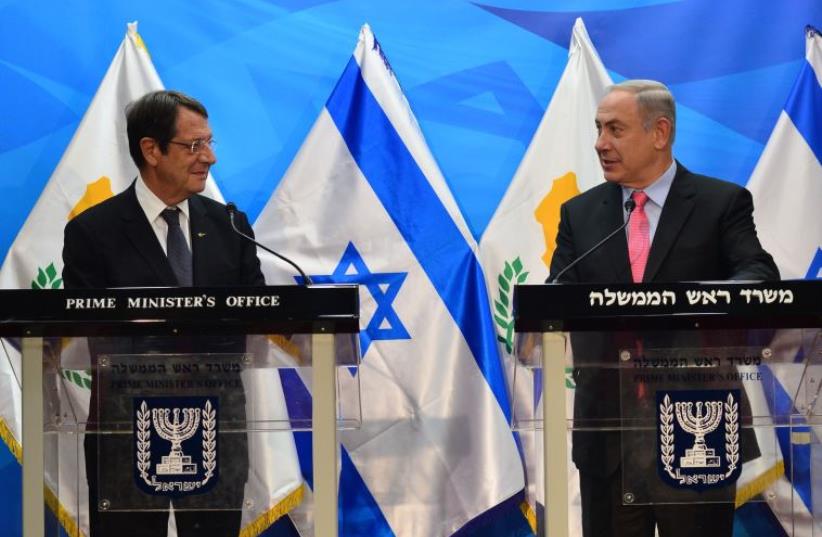 Prime Minister Benjamin Netanyahu meets with Cypriot President Nicos Anastasiades in Jerusalem
(photo credit: KOBI GIDON / GPO)
Advertisement
Jerusalem and Nicosia downplayed any crisis in ties as Cypriot President Nicos Anastasiades flew to Israel Sunday evening for a hastily arranged meeting expected to focus on developments in Turkey and energy issues.The meeting, planned late last week, fueled speculation of sudden difficulties in the relationship as a result of the rapprochement agreement Israel and Turkey signed last month.Israel’s relationship with both Cyprus and Greece has flowered in recent years, both as a result of the discovery of natural gas in the eastern Mediterranean and because of the steady deterioration of Israeli-Turkish ties since Recep Tayyip Erdogan first came to power in 2002.One diplomatic source in Jerusalem said Israel had kept Nicosia abreast of its negotiations to reconcile with Turkey, and that there was nothing dramatic about Anastasiades’s trip. The source said a face-toface meeting was warranted as a result of the developments in Turkey following the failed coup there two weeks ago.Anastasiades, in comments before meeting Netanyahu, said he and the premier both meet and speak on the phone regularly.“Transparency,” he said, “is essential for our partnership,” and “important in understanding each other’s needs as people and states.”Anastasiades hosted Netanyahu and Greek Prime Minister Alexis Tsipras for a trilateral summit in January, and announced that another such meeting is scheduled for later in the year in Jerusalem “to continue the work we started in Nicosia.”The Cypriot president was accompanied by his Foreign Minister Ioannis Kasoulides and Energy Minister Yiorgos Lakkotrypis.Referring twice to Netanyahu as his “dear friend,” Anastasiades said Israel and Cyprus were “reliable partners that see eye-to-eye on a wide agenda of issues ranging from energy to security, to a very sincere, open and frank political dialogue.”He said that through continuous cooperation over a wide range of fields, the two countries have been able to form a “common language [that] enables us to stand by each other in these very challenging times as we are faced with so many attacks against our common rights.“This is true in our immediate region, but also in many parts of the world,” he said.As an indication of how the ties are growing, he pointed out that last week there were 80 flights from Israel to Nicosia.He also expressed his appreciation to Israel for sending personnel and equipment last month to help put out a wildfire on the island.Israel and Cyprus can rely on each other, he said, “[as a] result of the work we have been doing together during the past few years in bringing our countries closer.”Netanyahu welcomed Anastasiades to his office by remembering that Cyprus was the first country he turned to in 2010 for help in combating the fire that devastated the Carmel Forest, and saying he felt “privileged” to reciprocate last month.“That’s exactly the kind of thing that friends do,” he said.“They come to each other’s help in times of need, but also cooperate in good times or cooperate to make times better.”Netanyahu said Israel and Cyprus were both “small democracies in the eastern Mediterranean sharing common challenges, as well as common opportunities “in security cooperation, in gas, in emergency cooperation, commerce, tourism – many, many fields.”The Cypriot delegation will return home Monday morning.