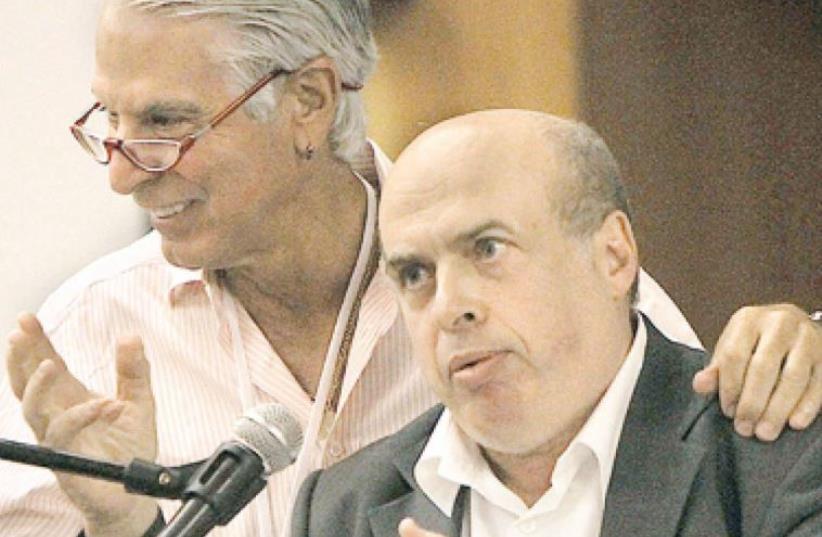 Natan Sharansky with Jewish Agency’s chairman Richard Pearlstone
(photo credit: BRIAN HENDLER)
Advertisement
Jewish Agency Chairman Natan Sharansky will end his tenure when his current term expires in June 2017, he told The Jerusalem Post on Monday.Sharansky, 68, has headed the agency since June 2009, serving two terms, and now believes it’s time for some fresh blood.“I’m not going to serve another term,” he said during a conversation at his Jerusalem office. “I told the prime minister. It’s not healthy for the organization. There must be new people and new ideas.”Without revealing exactly what he has planned for life after the Jewish Agency, the largest Jewish nonprofit organization in the world, Natan Sharansky says he will continue the work he has been doing for the past 45 years. “All my life I’ve been doing the same job really – connecting between Israel and world Jewry. I’m not going to leave this topic.”The former Soviet refusenik is famed for his struggle for freedom. Sharansky was held in Soviet prison for nine years during the 1970s and 1980s, convicted of working for American intelligence. Following his release as part of an East-West prisoner exchange, he immediately immigrated to Israel. Natan Sharansky founded and led the Yisrael Ba’aliya party for Russian immigrants from 1996 to 2003, when the party merged with the Likud.Sharansky served in a variety of ministerial roles both as a Yisrael Ba’aliya MK and later a Likud MK, before trading in the Knesset for the Jewish Agency.Sharansky is the author of three best-selling books, and is the recipient of both the Congressional Gold Medal and the Presidential Medal of Freedom.World Likud has nominated Ma’aleh Adumim Mayor Benny Kashriel as Natan Sharansky’s successor, as reported by the Post last month. Kashriel, 64, has served as mayor of the settlement since 1992. The playing field, however, is still wide open. The sitting prime minister traditionally recommends a candidate for the coveted position before a complicated election process ensues. At the last stage, the candidate must be approved by a majority vote by the Jewish Agency Board of Governors. Though Netanyahu is also the leader of the Likud, which elected Kashriel, as prime minister he may still recommend someone else.