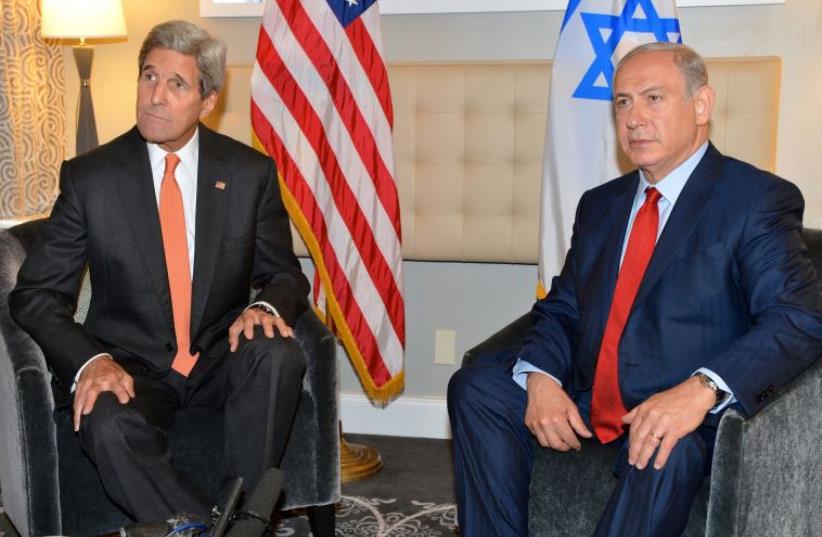 US Secretary of State John Kerry (L) meets Prime Minister Benjamin Netanyahu in New York
(photo credit: STATE DEPARTMENT)
Advertisement
There is “no particular significance” to the timing, nor any specific goal set for US Secretary of State John Kerry’s trip to Israel this week, aides said.Kerry plans to visit Tel Aviv, Jerusalem and Ramallah to discuss “the normal things you’d imagine we’d have to talk about,” a senior administration official told reporters at the weekend. The secretary of state departed Washington on Sunday for the United Arab Emirates. He will arrive in Tel Aviv on Tuesday.“We’re not trying to make any kind of an agreement with the Israelis ourselves, and we’re certainly not trying to make any kind of agreement between the Israelis and the Palestinians to resume negotiations or otherwise.”The Obama administration has twice tried and failed to broker peace between Israel and the Palestinians, once under Kerry’s direction in 2013. Those negotiations produced no tangible results.The effort was followed shortly by the Gaza war of 2014 between Israel and Hamas in Gaza, and in recent months, by a steady tempo of violence, including stabbings and vehicular attacks by Palestinians against Israeli civilians, and Palestinians killed in confrontations with Israeli soldiers.In preparation for Kerry’s arrival, several senior US officials have been in Israel to discuss agenda items. “We talked about some ideas for how to stop the violence,” one official said, “improve conditions for the Palestinians, and start to get things headed in a more positive direction.”“I’ve been here this week having some further conversations along those lines,” the official continued. “Nothing concrete has come out of that, and I don’t want to get into any of the specifics other than to say that a variety of different ideas have been talked about, all with the purpose of trying to stop the violence and restore calm in a sustainable way.”Despite brokering an agreement in Amman several weeks ago to install cameras on the Temple Mount (Haram al-Sharif), where Palestinians feared Israel sought change to its operations, the violence has nevertheless continued, with several attacks in this past week alone.One official said the plan to install cameras is proceeding “exactly as we had intended.” But beyond that, there are few concrete achievements the State Department expects of the visit.“There’s no agreement to be reached between the parties now,” the official said. “There’s nothing we’re trying to get them to agree to, right? We’re trying to encourage both of them to do the kind of things that we think will be helpful and in their interests and in our interest in preserving stability and moving the situation forward in a more positive direction.”