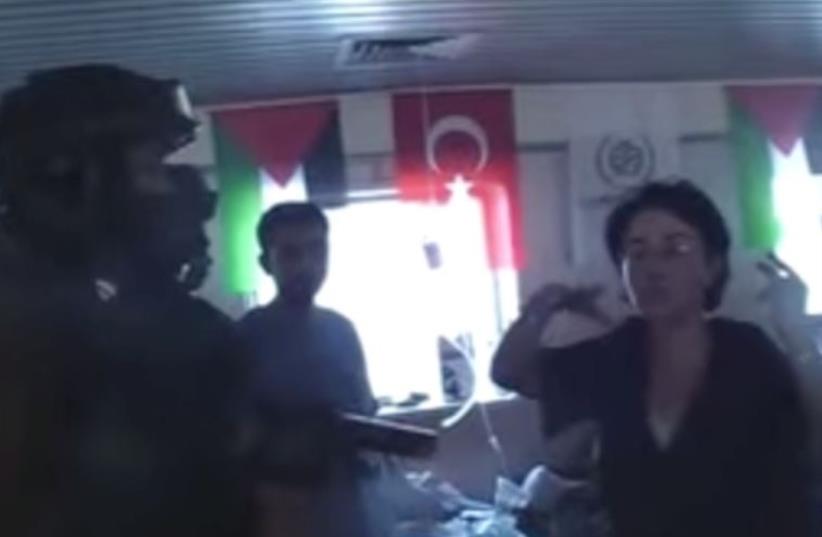 Haneen Zoabi on board the Mavi Marmara, may 2010.
(photo credit: screenshot)
Advertisement
Legislation making it possible to ban those who speak in support of terrorism from running for the Knesset was approved by the Ministerial Committee for Legislation on Sunday.The committee, however, granted the coalition freedom to vote according to conscience on the legislation proposed by MK Sharon Gal (Yisrael Beytenu) in the preliminary vote scheduled for this Wednesday. The move means that the ministerial stamp of approval does not carry the same near-guarantee that the bill will pass as it usually does.The Basic Law: Knesset legislation states that a candidate or party list may not run in an election for the Knesset if its actions “clearly or implicitly reject Israel’s existence as a Jewish and democratic state, incites to violence or supports armed conflict by an enemy state or terrorist organization against Israel.” Gal’s proposed amendment would add the words “including statements” after “actions.”The ministers rejected the second part of Gal’s bill, which sought to put the burden of proof on the accused that he or she doesn’t support terrorism against Israel.The legislation was nick-named the “Zoabi bill” after MK Haneen Zoabi (Joint List), who participated in the 2010 Gaza flotilla aboard the Mavi Marmara during which passengers responded violently to Israel Navy commandos’ attempts to redirect it, resulting in nine deaths. In 2014, the Joint List MK said that the kidnapping of three teenagers in Gush Etzion – who were subsequently murdered – was not terrorism, and wrote an op-ed praising Hamas during Operation Protective Edge.The Central Elections Committee voted ahead of the 2015 election to ban Zoabi from running based on the current version of Basic Law: Knesset, but the High Court overturned the decision on grounds that there was not clear enough proof that she supported armed conflict against the state.Gal praised the ministers for authorizing part of his bill and called for MKs to vote for it on Wednesday.“We will no longer contain incitement and support for terrorism. We are setting limits to anti-Israel activity that characterizes some MKs on the Joint List,” he said. “Words lead to actions and we must fight terrorism and its supporters.”The Israel Democracy Institute opposed Gal’s bill, saying it severely and unjustifiably limits the basic democratic right to vote and be elected.“Any limit on the right to be elected, which is central and important in a democratic government, must be as small as possible and any expansion of grounds for disqualification must be very carefully considered,” the position paper by Prof. Mordechai Kremnitzer and Dr. Amir Fuchs reads.The authors added that the bill will be interpreted as targeting the Arab minority’s right to representation and would cause harm to Isra - el’s international image as a democracy.