The Israeli delegation from the Knesset Christian Allies Caucus, the Israel Allies Foundation and the World Jewish Congress will meet with high-ranking Romanian politicians. 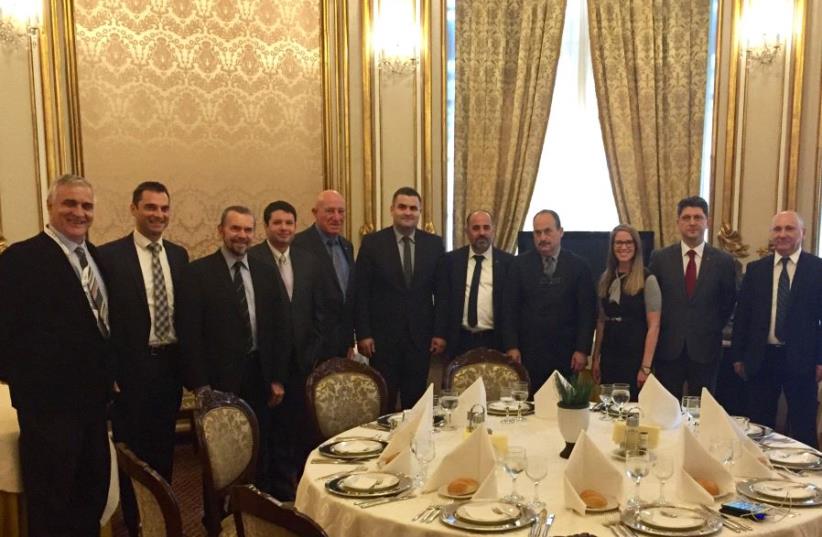 The Israeli delegation to Romania, representing the Knesset Christian Allies Caucus, World Jewish Congress and ICEJ.
(photo credit: RENEE SHARON)
Advertisement
Romania will become the 36th country in the world to have a pro-Israel caucus on Wednesday, in a ceremony attended by Romanian and Israeli members of parliament and local Jewish and Christian leaders at the Romanian parliament in Bucharest.The Israeli delegation from the Knesset Christian Allies Caucus, the Israel Allies Foundation and the World Jewish Congress will meet with high-ranking Romanian politicians from coalition and opposition parties. The Romanians heading the effort include Sen. Titus Corlatean, a former minister of justice and foreign affairs; MP Gabriel Vlase, chairman of the Romanian-Israel Parliamentary Friendship Group; and his deputy chairman, MP Silviu Vexler.Members of the Israeli delegation will also meet with Christian leaders of various denominations at an event hosted by the International Christian Embassy Jerusalem, in an effort to develop further support for Israel through shared Judeo-Christian values. Additional events will be hosted by the local Jewish community in Bucharest in order to heighten consciousness of the history and concerns of Romanian Jewry.“It is truly heartwarming to see the strong support for Israel among parliamentarians in Romania,” said Shas MK Ya’acov Margi, a member of the Knesset Christian Allies Caucus. “We are certain that our work in Bucharest will garner a richer, more substantial relationship between the peoples and parliaments of the two countries.”Col. (res.) Moshe Leshem, a member of the World Jewish Congress executive board, said, “The importance of this faith-based diplomacy in bolstering support for Israel cannot be underestimated, especially at a time when the Jewish state has come under assault in so many quarters.”Besides Margi, the Israeli delegation will include Knesset Christian Allies Caucus director Josh Reinstein, World Jewish Congress-Israel director-general Laurence Weinbaum, Israel Allies Foundation European director Andras Patkai and Israeli Ambassador to Romania Tamar Samash.The Knesset Christian Allies Caucus was established in 2004 and consists of 19 members of Knesset from seven political parties. The caucus aims to build direct lines of communication between Knesset members and Christian leaders, organizations and political representatives around the world.The Israel Allies Foundation is dedicated to promoting communication between parliamentarians and legislators who share a belief that the State of Israel has the right to exist in peace within secure borders. It coordinates the activities of 35 Israel Allies Caucuses around the world.The World Jewish Congress is the international organization representing Jewish communities in 100 countries to governments, parliaments and international organizations.