Survivors share testimony to mark 23 years since genocide in Rwanda 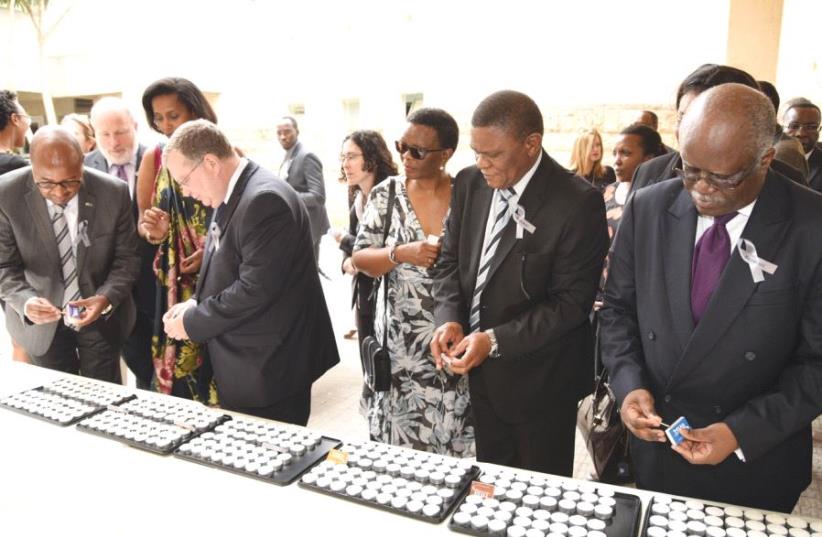 Attendees light candles at an event on April 30, 2017 at Kibbutz Tel Yitzhak marking the 1994 genocide in which 800,000 Tutsis were killed in Rwanda
(photo credit: ZOHAR TSABARI)
Advertisement
A survivor of the 1994 genocide against the Tutsi ethnic group in Rwanda shared her harrowing story with some 230 people on Sunday at an event hosted by the Embassy of the Republic of Rwanda in Tel Aviv to mark 23 years since the atrocities.Suzanne gave painful testimony of her long journey to survival as 26-year-old woman who lost her newborn baby after giving birth to him in a bush. She was immediately followed by another account delivered by Lithuanian-born Holocaust survivor Prof. Daniel Gold, who recounted his “odyssey” to Israel after having escaped death by a stroke of luck and then having fled the Siauliai Ghetto as a young boy under the protection of his uncle and aunt.Both survivors lost many members of their families in the respective genocides, Suzanne losing her husband, three children, seven siblings and her father. She recounts searching for a discreet place to give birth to her baby, while hearing voices shouting, “If you find Tutsis kill them.”A few days after losing her newborn baby, Suzanne found refuge with a Hutu woman, but after refusing to marry the woman’s brother, Suzanne related that her “savior” invited the Interahamwe militia to the house, who proceeded to abuse her.“I wish that genocide never happens again in any of your countries,” Suzanne told the international audience, her words being translated into English by an interpreter, but the emotion with which she relived her story speaking for itself.The event took place at the Massuah International Institute of Holocaust Studies in Kibbutz Tel Yitzhak, as part of a series of events taking place around the world under the banner Kwibuka, which means “remember” in the Kinyarwanda language spoken in Rwanda. The theme of the commemoration is to “remember the Genocide against the Tutsi, fight genocide ideology and build on our progress.”The mourning period began on April 7, when the genocide began in 1994, includes 100 days of commemoration – the same time period in which an estimated 800,000 to over one million Rwandans were killed – and ends on July 4, with the celebration of the 23rd anniversary of liberation.While the overwhelming majority of the victims were Tutsi, moderate members of the Hutu and Twa ethnic groups were also killed.Addressing the audience after the survivors spoke, Yoram Elron, director-general of the Ministry of Foreign Affairs’ Africa Division, spoke of the similarities between Israel and Rwanda.“We are full of admiration for Rwanda, that managed not just to survive but to successfully bring about reconciliation, healing and a thriving society,” he said, describing the “unbreakable bond” between the “two small countries facing numerous challenges but that have managed to build thriving countries.”He said the genocide in Rwanda was a stark reminder that the lessons of the Holocaust have not been learned.“We vowed never again yet the genocide still happened, a historical scourge that should shame us all... preventing it is the responsibility of every nation in the world so let’s show tolerance and work hard to make sure it doesn’t happen again.”Rwandan Ambassador to Israel Joseph Rutabana stressed the importance of identifying the Tutsis as the victims of the genocide rather than referring to it as the Rwandan Genocide. The victims, he emphasized, were killed “for the simple reason that they were born Tutsi – it took their killers just 100 days to commit one of most heinous crimes against humanity.We must be clear that the objective was to exterminate the Tutsi. There should be no confusion. Some people have persistently and deliberately continued to refer to it as the Rwandan Genocide without referring to who it targeted,” he said, adding that those people are directly or indirectly connected to the genocide and thus try to trivialize it.The ambassador also noted that some perpetrators of the genocide have been given safe havens in foreign countries.“There should never be impunity for genocide,” he said, highlighting the responsibility of those countries to investigate the people in question or to extradite them.He also expressed hope that the international community drew lessons from its inaction during the genocide in Rwanda, “so that proper mechanisms can be put in place to prevent any other similar situations anywhere.”The UN was criticized for having an inadequate peacekeeping force in the country, and together with members of the international community was decried for its inaction during the genocide.“I hope we will all continue to preach ‘never again,’” Rutabana concluded.