Deputy battalion commander: In asymmetric warfare era, the tank is what gives us the advantage. 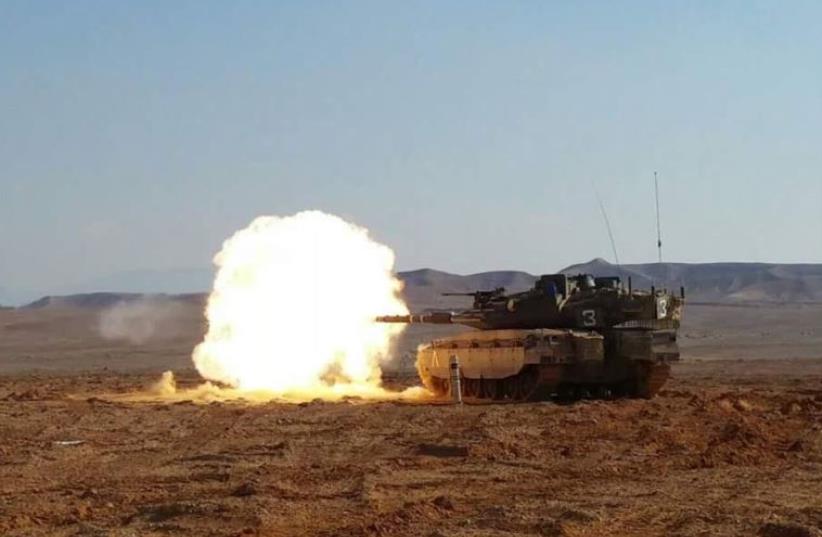 Members of the 82 Battalion, a part of the 7 Armored Brigade, begin their conversion training course on the Merkava Mk 4 tanks in recent days
(photo credit: IDF)
Advertisement
In recent days, the IDF's Battalion 82 took a leap forward through decades of military technology, when it left behind it Merkava MK 2 tanks, and took possession of the cutting edge Merkava MK 4 tanks instead.Battalion 82, a part of the 7 Armored Brigade, is the first Hebrew armored formation. It was formed prior to the 1948 War of Independence, and took part in every one of Israel's wars, according to Maj. Itamar Michaeli, the battalion's deputy commander.Until mid-July, it was one of the very last conscripted forces to still use the aging Merkava 2 platforms. The last mission carried out by the battalion with the old tanks was to secure the Syrian border, keeping guard over a unstable arena, filled with radical Sunni and Shi'ite armed forces. That mission was completed in mid-July.Now, the battalion has gone into a lengthy conversion training program, to enable crews to become familiar with the Merkava 4. In the coming weeks, battalion members will learn how to operate the Rafael-made Trophy active protection system, which intercepts anti-tank missiles. They will also learn how to utilize the tank's radars, and advanced computers and communications systems.Maj. Michaeli argued that in the age of asymmetrical warfare, tanks remain essential for for Israel's battlefield success.In every engagement with the enemy, whenever tanks moved forward, their appearance decided the outcome of the battle, Michaeli said.In Operation Protective Edge against Hamas in 2014, Maj. Michaeli fought in a combined paratroopers-armored corps team in Gaza, and said he saw first hand how the arrival of tanks changed the outcome on the battlefield."The tank is a game changer. In infantry against infantry situations, if there is no numerical advantage to either side, both sides incur many casualties. When you create a local advantage by sending in tanks, you break the balance," he said. "In every battle I've known, tanks had prevented many casualties, and destroyed the enemy. they enabled medics to move in and rapidly evacuate the wounded soldiers, saving critical time." Yet older tanks had also proven to be vulnerable targets. Ten years ago, during the Second Lebanon War, when Hezbollah's rockets rained down on northern Israel, the IDF sent tank formations into southern Lebanon to do battle. The first tank to be hit by Hezbollah fire was a Merkava 2 tank belonging to Battalion 82. It was not the last tank to be destroyed by Hezbollah in that war.The Merkava 4, on the other hand, is equipped to intercept shoulder-fired missiles, while Trophy's radars can also be used to detect the location of enemy combatants, by scanning 360 degress around the tank.Michaeli said that in the face of enemies that know how to appear, attack, and vanish quickly, the IDF Ground Forces must be able to respond in time. The equipment needed to accomplish that "still does not fit on the back of an infantry combat soldier," Michaeli added.Computers on board the Merkava 4 can send and receive precise information on enemy coordinates, sharing the data with other tanks, artillery units, and the air force.In addition, the tanks bring a level of firepower that the infantry cannot."When you want to level heavy damage, it cannot be done just with a 5.56 mm bullet. If you want to locate enemies, there are capabilities that tanks can provide [that infantry cannot]," he said.Battalion 82 spent five months on the Syrian border, a line Michaeli described as "strategic, with many changes occurring. We study events beyond the [border] fence and ensured that local residents and farmer were secure, and could work their land, down to the last meter," he said.While facing the Syrian border, the battalion learned how to conduct a range o defenses, against a variety of new potential enemies, very different from the structured Syrian military that Israeli tanks once faced in the same area.Today, Michaeli said, integrating with the infantry and with Military Intelligence are key aspects of the IDF's new approach to defense.The deputy commander highlighted another challenge when it comes to adopting a platform as technologically advanced as the Merkava 4; Maintaining fighting spirit. "So long as the weapons are older, soldiers remain hardened. Much more is demanded of them. Here, the battalion members must remain tough, even while using advanced, comfortable technology," he said.Michaeli's generation played sports games outdoors all day, while the young soldiers joining Battalion 82 belong to the computer game generation. "I think there should be a balance in the middle. We have to bring them to this middle ground. They can't be ignorant about technology and they must have some eye hand coordination, and awareness of computerization processes. But they also must be combat personnel, and know how to deal with a lack of sleep, moving with heavy weights, and undertaking intensive activities," he said.The Merkava 4 tanks will enable the battalion to deploy in new ways, spreading out wider on the battlefield, Michaeli said, rather than moving in a single column, as the Merkava 2 formations once did, to rescue vehicles that broke down."Here we have the opportunity of fighting over a wider area, with a more credible, more powerful platform, that can do greater damage," he said.The Merkava 2 tanks have now left the service of all conscripted unit, but will remain at the disposal of some reserve tank crews.