Grace Njapau is running for office for the Chavuma constituency, and says her husband’s Jewish and Israeli identity play a positive role in her campaign. 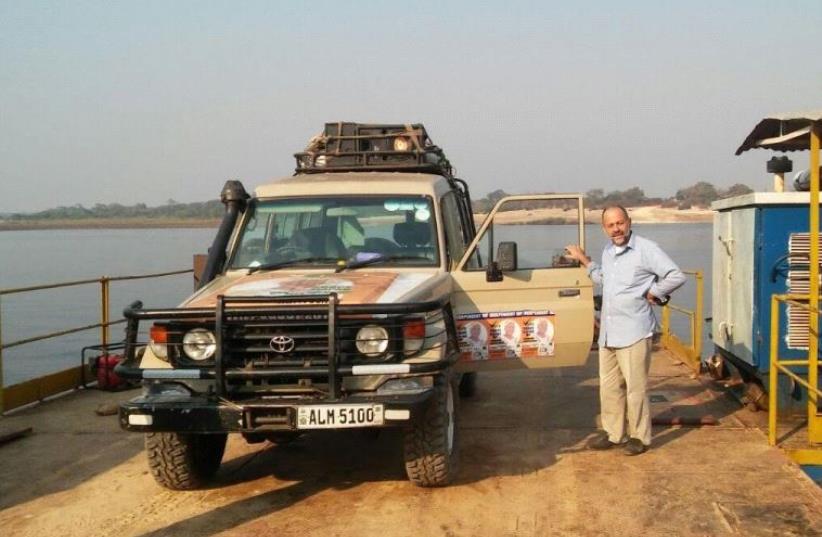 Yitzhak Efrati with his car, plastered with stickers supporting his wife, Grace Njapau
(photo credit: COURTESY YITZHAK EFRATI)
Advertisement
As the 2016 Zambian election for the next president and national assembly approaches, Israel is playing a unique role in one candidate’s campaign. Zambian politician Grace Njapau is hoping to be elected to the National Assembly in the Chavuma constituency, and her husband, an Israeli Jew, is doing all he can to help.Indeed, Yitzhak Efrati’s religion and national identity comprise a larger part of his wife’s campaign than one might imagine. Zambia is a Christian country, and according to Efrati – who left Israel for Africa in 1978 – “all Zambians see themselves as a direct part of Israel, because of their religiosity.”“We believe in Christ, and we believe Christ came from Israel,” said Njapau.Quoting the Bible, she added that it’s important for Zambia to have strong ties with Israel, because “those who bless Israel will be blessed – and we want to be blessed.”Everyone, according to Efrati, knows Njapau’s husband is Israeli and Jewish.“She talks about it whenever she can, and is proud of it,” Efrati told The Jerusalem Post.Njapau, herself a Christian, agreed, saying “Everyone knows I’m married to a Jew. He’s well respected, he even speaks my language.”Efrati grew up on haredi moshav Beit Hilkiya in central Israel, and although he relaxed his religious observance many years ago, he has always remained strongly connected to Jewish teaching and practice.Njapau is the chairwoman of an organization dedicated to Israel-Zambia ties – Magen David Israel-Zambia Initiatives – which seeks to enhance business and cultural ties between the two countries.Ronnie Netanel is the organization’s ambassador in Israel, and has been working with Zambia since 2000. Netanel does due diligence for Israeli companies interested in working in Zambia, and tries to advance projects in the fields of education, agriculture, cyber and electronics.She is a partner in local companies there, works closely with the Zambian Embassy, and is aided by her brother Ram Orbach, who is based in Zambia.Orbach and Efrati have been working with Chabad to ensure a new Jewish community center is established in the Zambian capital Lusaka, and Efrati says confidently that when his wife returns to government, she will ensure this happens.Njapau, who served as deputy interior minister from 2006-2012, “is an amazing diplomat and politician,” said Netanel, who emphasized the contributions Njapau has made to the Magen David Israel-Zambia Initiatives.“This is important not only for collaboration between the two countries, but also between Christians and Jews. We really want to bring together the business worlds of both countries.”Njapau is standing as an independent candidate.“I am for the people.” she stated, saying she wants to help develop the country.Turning back to Israel, she said she hopes to encourage more Israelis to visit Zambia, and particularly Chavuma.“There is a lot that Israeli businessmen and farmers can do in Chavuma.They can grow rice or fruit here...they can do anything.”