There’s a special relationship growing between Israel and Senegal

Israeli envoy: We can speak to Africa authentically and have an equal conversation in a way neither Europe nor the Arab world can. 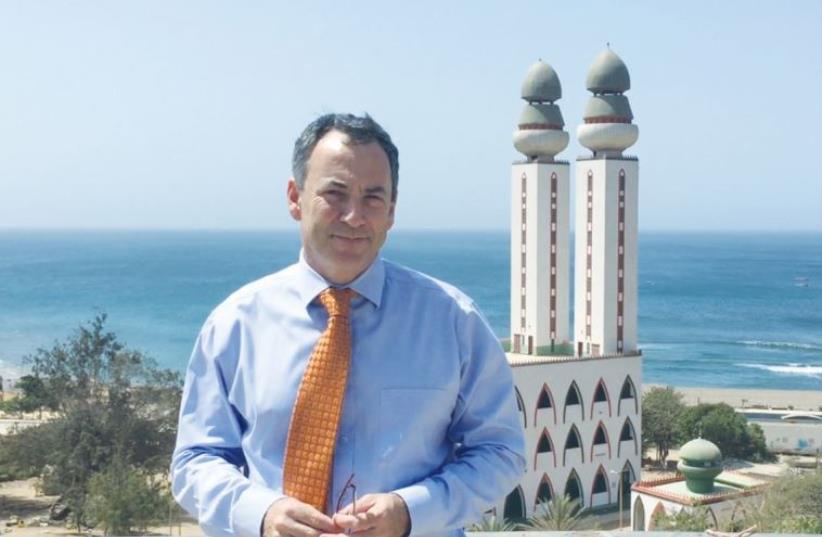 ISRAEL’S AMBASSADOR to Senegal, Paul Hirschson, is seen in front of the Divinity Mosque in Dakar
(photo credit: SETH J. FRANTZMAN)
Advertisement
DAKAR – One wall inside the Israeli Embassy in Dakar, Senegal, is decorated with historic photographs of Israeli leaders who have passed through.There is a photo of Golda Meir, then the foreign minister, visiting in 1964. Shimon Peres was here in 1978 for a meeting of the Socialist International and was greeted warmly by Senegalese president Leopold Senghor.It is a reminder that this mostly Muslim West African state has enjoyed a healthy relationship with Israel.Paul Hirschson, Israel’s ambassador, likes to point out that the Jewish state was the fourth country to recognize Senegal. Relations took a brief hiatus following the 1973 Yom Kippur War when more than two dozen African states severed ties with Israel under pressure from Arab countries.Since the 1990s, however, relations have been growing again, and in 1999, communications minister Binyamin Ben-Eliezer paid a high-level visit.Prime Minister Benjamin Netanyahu, speaking at a meeting of the Knesset Caucus for Israel-Africa Relations earlier this month, said Israel wanted to reach out to African states and improve relations.“It’s so clear that this is good for Africa, and it’s good for Israel,” Netanyahu said. “We face a multitude of challenges and opportunities.”The prime minister is planning a trip to Uganda in July to commemorate 40 years since the Entebbe raid.Hirschson, who is ambassador to neighboring Gambia, Guinee-Bissau, Sierra Leone and Cape Verde, as well, sees the relationship between Israel and sub-Saharan Africa as unique and historic.“We were slaves and refugees and in exile,” he told The Jerusalem Post. “We were colonized. We can speak to Africa authentically and have an equal conversation in a way neither Europe nor the Arab world can.”He believes the historic suffering of the Jewish people creates a unique bond in discussions with people here.For instance, the island of Goree, just off the coast of Dakar, the capital, was a major slave-trading station in which an estimated three million Africans were forcibly sent to the New World from 1540 to 1848.In meetings with Senegalese politicians and academics, he continually stresses this history.Aminata Toure, a former prime minister and an adviser to the current president, asserts that relations with Israel are long-lasting.“We can maintain good relations with Israel and the Arab countries,” she tells the Post. “We see no contradiction, even if we have our opposition to some issues.”She references the Palestinian-Israeli conflict as a place where Senegal’s stance is clearly in favor of a two-state solution.Senegal chairs the UN’s Committee on the Exercise of the Inalienable Rights of the Palestinian People, and was elected to the Security Council in 2015. This puts the West African state in an exceptional position regarding a Muslim country – with a Sufi Islamic background that has blended tradition with openness, it is well positioned as a bridge between Israel and the Arab world.“They are present in rooms in the Arab world, where we are not,” Hirschson says.To foster relations in this region, the embassy has embarked on numerous initiatives, including support for local agriculture and a cultural exchange. A former Israeli ambassador, Gideon Behar, learned Wolof, the local language spoken by many Senegalese, and almost everyone we meet recalls how he would give interviews in the local language, rather than in French, which had been brought by the colonial power.In 2013, Israel hosted a film festival in several Senegalese cities. It currently provides sheep to local families on Id al-Adha, the Islamic sacrifice feast, called Tabaski here.The secretary-general of the Imam’s Association, Imam Omar Diene, has visited Israel on an exchange program, and in the past few years has taken it upon himself to bring delegations of imams to Israel.Mamadou Thior, a local radio presenter, says religious and cultural initiatives by Jerusalem have helped create a lot of public awareness and a healthy understanding, and while people might be sympathetic to the Palestinian cause, it doesn’t need to be paired with hostility toward Israel.The president of Senegal, Macky Sall, made a similar statement to a television station in Dubai last week when challenged about his country’s relations with Israel.He shrugged off the issue, saying yes, the country does support Palestine, but that it doesn’t mean they don't accept to have an Israeli ambassador here.Dakar’s influence on the regional and international stage also means it might be a target for extremist groups that object to its openness and the fact that it’s a tourist destination and hub for many western NGOs and embassies.The so-called Arab Spring has brought instability south into sub-Saharan Africa; Islamists aligned with extremist groups in Somalia, Nigeria, Mali, Libya and Mauritania carry weapons and ideologies exported from the North.“There is a position for us...to seek ways to export our stability to the rest of the region, and that is of mutual interest,” Hirschson argues.The issue of instability was brought home earlier this week with an attack by members of al-Qaida in the Islamic Maghreb (AQIM) on a beach resort in Grand Bassam, Ivory Coast, that killed 16 people.This comes on top of similar attacks in Bomako, Mali, and Ouagadougou, in Burkina Faso, so there is a shared experience with Israel, which has long confronted the terrorism and threats now faced by West African states.In the Knesset, Netanyahu mentioned this “common battle.”As Israel works on maintaining strong relations with Kenya, South Sudan, Uganda and Nigeria, high-level delegations have not visited Senegal.Then-foreign minister Avigdor Liberman made trips to African countries in 2009 and 2014, but they did not include Senegal.It remains to be seen whether the strategic partnership that some envision for Israel in West Africa will be nurtured in coming years based on the relationship with Senegal.