Women at the forefront of Gaza flotilla and peace march differ on approaches to activism. 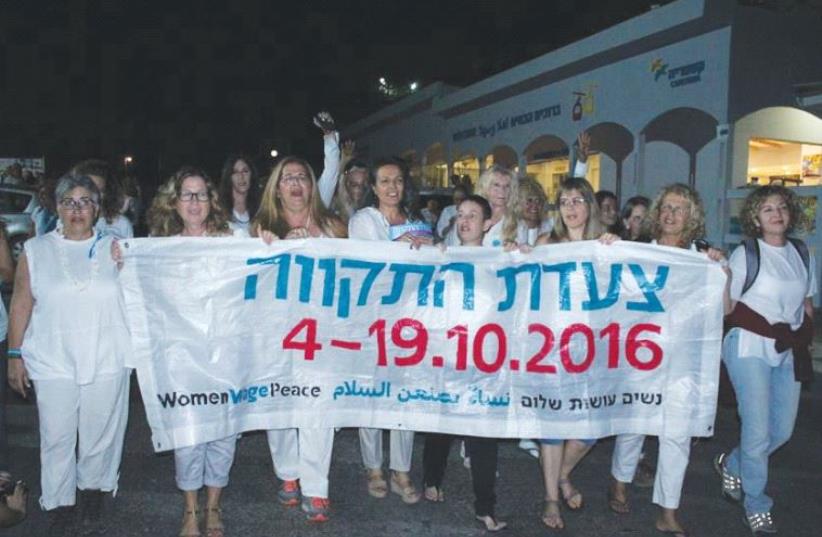 MARCHERS of the Women Wage Peace movement set out last night on the 2016 March of Hope from Rosh Hanikra to Jerusalem, where they intend to picket the prime minister’s official residence in two weeks to demand a peace settlement
(photo credit: WWP)
Advertisement
Two groups of female activists made headlines on Wednesday. Both movements push women’s role to the forefront of the Israeli- Palestinian conflict, yet their approaches to both a solution and activism itself differ greatly.During the day, 13 women from around the world, including a Nobel Prize laureate, approached Israel’s maritime blockade of Gaza in the sailboat Zaytouna-Oliva, led by the Women’s Boat to Gaza Movement. The boat was intercepted by the Israel Navy.The night before, the NGO Women Wage Peace (WWP) began its “Mass March for Hope” from the North to Jerusalem, with thousands of Israeli women setting off on a cross-country march in support of a negotiated solution to the Israeli-Palestinian conflict. A core group of some two dozen women, accompanied by hundreds of supporters along the way, will continue a two-week, 250 km march to the capital, where they intend to picket the prime minister’s house during Succot to demand a solution to the conflict.According to Vardit Kaplan, a spokeswoman for WWP, the goal of the march is to raise the Israeli public’s consciousness of the need for a negotiated solution to the conflict and “to demand the decision makers to go back to the table. We will not stop until we will achieve a peace agreement,” Kaplan said.The marchers will also meet along the way with mayors, municipal leaders and Palestinian and Jordanian women.In some ways the activists movements mirror each other. Both are seeking to utilize their roles as women in conflict resolution. Both groups also have Nobel Peace Prize recipients accompanying their cause: for WWP, 2011 Nobel recipient Leymah Gbowee, a Liberian peace activist who helped bring an end to the Second Liberian Civil War and for the Women’s Boat to Gaza, 1976 Nobel recipient Mairead Maguire, a leader of Northern Ireland’s peace movement.Although both all-female movements are taking place simultaneously, they are not coordinated and their approaches to activism differ greatly. Moreover, WWP is composed of mostly Israeli women, while the boat movement is largely non-Israeli.“The Gaza ship is clearly an anti-occupation group, while WWP does not talk about the occupation at all. Rather, they are campaigning for a more general and ambiguous message that seeks to push for a negotiated agreement to the conflict without stating its parameters,” stated Dr.Sarai Aharoni a lecturer in gender studies at Ben-Gurion University.Israeli activist Zohar Regev, who was been living in Barcelona for the past 12 years, is a coordinator of the women’s boat. She told The Jerusalem Post Wednesday afternoon that the Women Wage Peace platform is ineffective, as it ignores immediate humanitarian concerns. “We realized that injustice must stop in order for real negotiations to take place. What Women Wage Peace is talking about is to get to a diplomatic solution, but their line is much softer on the violation of human rights that Israel is committing,” she stated. “I think for us, who see things from the outside, it is clear that without the lifting of the blockade and without ending the occupation, without stopping administrative detentions of Palestinian non-violent activists, there will not be a chance for meaningful negotiations. Negotiations without justice is just not enough.”Foreign Ministry spokesman Emmanual Nahson declined to comment on the women’s boat, but stated that the maritime blockade is “an internationally recognized instrument imposed on the Gaza Strip; it is the consequence of Hamas’s use of sea routes in order to smuggle weapons into the Gaza Strip.”The WWP’s Kaplan contends that dealing with any specific issue in the Israeli- Palestinian conflict, such as the maritime blockade of the Gaza Strip, will not solve the conflict. “We are for any operation that can help lead into the peace process in general,” stated Kaplan, “but in general we don’t want to deal with a specific issue, we want to put pressure on our decision makers to go back to the table. We are looking for something more widespread that deals with all the issues. Removing the blockade from Gaza is good and okay, but until we solve the total problem of the conflict then the blockade will be only come again. We need a solution for the long term.”Ben-Gurion’s Aharoni said that although these two women’s peace movements differ in their activism, they are a continuation of a long and diverse history of Israeli and Palestinian women’s involvement in peace activism.“Women in Black in 1987 was one of the most visible Israeli women peace groups of activists that started weekly vigils to protest the Israeli occupation and the Four Mothers movement in 1997 demanded the withdrawal of the IDF from Lebanon,” she stated. “The Four Mothers were highly contested at the time; they were perceived partly as a hysterical group of mothers of soldiers that were threatening national security. But eventually, when Ehud Barak decided to withdraw from Lebanon, the Four Mothers were seen as those who dared to put the issue on the table.”According to Aharoni, since the 1980s, around 50 different women’s peace groups have attempted to organize national activities relating to the resolution of regional armed conflicts.“Much of this history is unknown to the public and to some degree to the world,” she added.While disagreeing on the approach and goal of their female-activist movements, both groups did agree that women deserve an increased role in seeking a resolution to the Israeli-Palestinian conflict.“We are more than 50% of the [Israeli] population and we deserve to have our voice heard,” stated Kaplan. “We know from experience that woman have managed to achieve conflict resolution in Liberia and Northern Ireland. This is not theoretical – this can actually happen.”