Asked how it felt to have the soot of one of Judaism’s most historic events on his flesh, Gutfeld paused thoughtfully for a moment. “It is amazing when you think about what you are digging.” 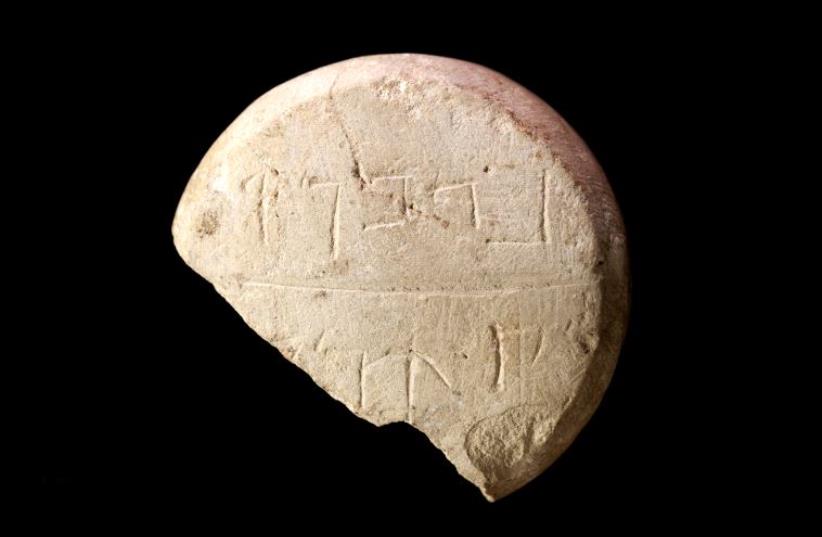 An image of the scale weight from 70 AD.
(photo credit: OREN GUTFELD/IAA)
Advertisement
A routine archeological excavation of an Old City synagogue destroyed by Jordanian troops during the War of Independence turned into much more, after the burned remains of relics from the Second Temple period were revealed several meters below ground level.Among the artifacts unearthed in 2013 in the Jewish Quarter was a rare stone weight inscribed with the name of a priestly family, covered in ashes from the fire set by Roman soldiers to burn Jerusalem to the ground.The synagogue in question, Tiferet Yisrael – which was built during the mid-19th century and served as one of the two main synagogues of the Jewish Quarter along with the Hurva synagogue – was bombed in May of 1948 by the Jordanian Arab Legion.The rebuilding of the synagogues did not begin in earnest until 10 years ago, said Antiquities Authority archeologist Dr. Oren Gutfeld on Thursday, noting that the Antiquities Law requires excavations before construction of any kind.“After we cleared all the ruins from 1948, we started in the basement of the synagogue and uncovered its mikve [ritual bath], heating system and parts of a chandelier,” said Gutfeld, who oversaw the dig with Hillel Geva, director of the Israel Exploration Society.“And when we dug beneath the basement floor we uncovered a building from the Mamluk Period in the 13th-14th centuries, which turned out to be a Byzantine structure in secondary use, probably for public purposes.”Approximately three meters below the basement, Gutfeld said the Byzantine building was paved with mosaic tiles amid fresco walls, indicating it was a non-residential structure.“Immediately after we took out the floors we arrived to a very, very massive and deep conflagration layer from the year 70 AD, when the city was burned to the ground,” he said.“It was so massive, that every day after finishing the work we were all black [from the ancient soot], like firemen.”Upon removing the burned layer of debris, Gutfeld said a mikve from the Second Temple period was found next to a storage facility filled with fragments of pottery, stone vessels, animal bones and ancient coins.“During the fire and destruction, something blocked it, and it stayed frozen in time for 2,000 years,” he said.“While I was digging in the burned layer, I found a stone weight covered with soot, and only one of the 600 stone weights uncovered from the Second Temple period had a Hebrew inscription. So, I looked at it and smiled to myself thinking maybe it’ll have an inscription, and when I put it in a bucket of water and took it out I started to shiver.”Immersion in the water, Gutfeld said, revealed two lines of inscribed text.“The lower line had the name of the family of a high priest named ‘Katros’ written in Aramaic, but we could not understand the meaning of the upper line until recently, which is why we delayed publication of the find until now,” he said.After lengthy analysis, Gutfeld said it was recently determined that the first line also was inscribed with the family’s name, but in ancient Persian.“It was used to measure weight on a scale – maybe even for objects in the Temple,” he explained. “So it makes sense that the family name was inscribed on the stone.”Moreover, Gutfeld said the family is criticized in the Mishna for being corrupt and buying the title of priesthood.“It was very popular during the Second Temple period to buy into the priesthood,” he said.When asked how it felt to have the soot of one of Judaism’s most historic events on his flesh, Gutfeld paused thoughtfully for a moment.“It is amazing when you think about what you are digging,” he said, noting that neighborhood residents and rabbis came to the site to take some of the debris as souvenirs.For now, as the synagogue is being rebuilt, Gutfeld said he is still awaiting publication of the find in a scientific journal.