The stamp features a portrait of Peres against a library backdrop in recognition of his love of books.

Shimon Peres memorial postage stamp
(photo credit: Courtesy)
Advertisement
The Israel Postal Company in conjunction with Israel Philatelic Services on Monday issued a special Shimon Peres memorial stamp to mark the first anniversary of the death of Israel’s ninth president.The stamp is valued at NIS 2.40 and features a portrait of Peres against a library backdrop in recognition of his love of books. There are also national emblems; Peres’s name in Hebrew, Arabic and English; the years of his birth and death; and the word Israel in the three languages.Limor Peretz-Samia designed the stamp and the first day cover was designed by Tal Huber and Sharon Blinkov.The stamp was unveiled at a ceremony at the Peres Center for Peace and Innovation. It was attended by Communications Minister Ayoub Kara; Hezi Zaieg, chairman of the board of directors of the IPC; Danny Goldstein, director-general of IPC; Elhanan Shapira, the head of IPS; Chemi Peres, chairman of the Peres Center; and members of the Peres Center staff.Kara said it was entirely fitting to have a stamp in memory of Shimon Peres, as he had been appointed Israel’s first minister of communication in 1970. To produce a stamp in his honor was akin to closing a circle, said Kara, who described Peres as “a statesman par excellence” and went on to list some of the late president’s many accomplishments. 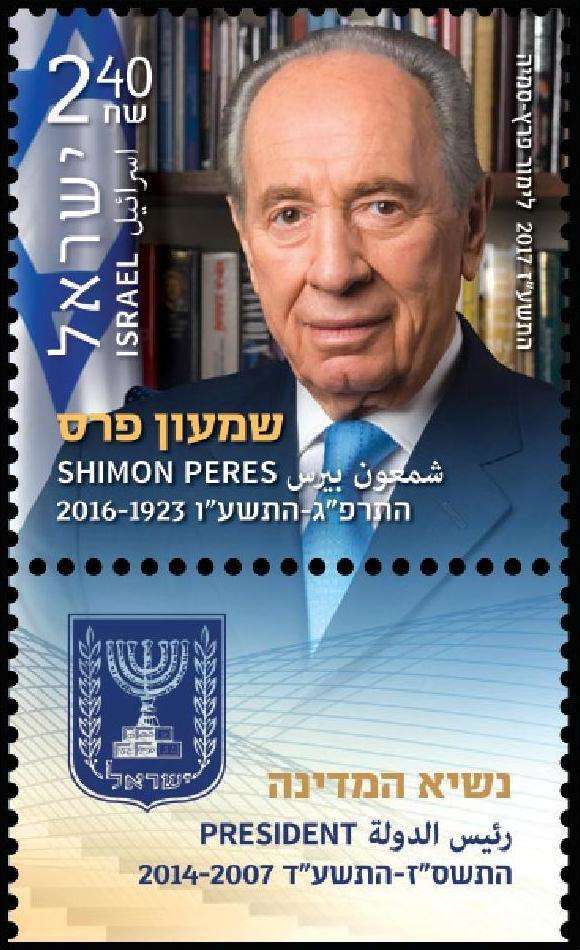 Full view of the Shimon Peres memorial stamp (Courtesy)
Calling him “a man of deed and vision,” Kara spoke of Peres’s contributions to Israel’s defense network in encouraging inventive creativity to enhance Israel’s defensive capabilities; the nuclear reactor in Dimona and the Negev Nuclear Research Center; the conceiving and promotion of Israel’s Defense Industries; Israel’s development as an innovative technological and scientific powerhouse; and Israel’s stable economy.Kara also emphasized how Shimon Peres tirelessly worked within and beyond the country’s borders in the quest for peace with Israel’s neighbors. His contribution was without parallel, said Kara. “We owe him a great debt of gratitude.”Chemi Peres called the issuing of the stamp “a very moving and appropriate tribute,” in light of his father’s long and loyal service to the state.Taking a gentle barb at the slowdown in postal services since such services were privatized, Chemi Peres said: “My father had no patience. He was too quick, and too sharp. So get ready, because the envelopes with the Shimon Peres stamps on them will move faster than anything you ever imagined. Envelopes with Shimon Peres stamps have a duty to move quickly.”Zaieg chose to ignore the veiled criticism and said; “Through postal items, this stamp will express throughout Israel and the world, the recognition and esteem of the people of Israel for the work and achievements of Shimon Peres.”