Reporter’s Notebook: Bennett went to KJ, a shul with a special place in his heart, for the holiday

Prime Minister Naftali Bennett prayed at the legendary Kehilat Jeshurun synagogue in Manhattan on the holiday.

NEW YORK – Congregation Kehilath Jeshurun, known as KJ, is a 149-year-old Modern Orthodox synagogue on the Upper East Side. Its rabbi emeritus is the renowned and formidable Rabbi Haskel Lookstein, of a prominent New York rabbinical dynasty (and, full disclosure, this writer’s principal and teacher at the affiliated Ramaz Upper School).

KJ is also the synagogue that Prime Minister Naftali Bennett attended while in New York for Shmini Atzeret on Monday night and a congregation that holds a special place in his heart.

With the High Holy Days and Sukkot festival days of the past month falling on weekdays, it was difficult finding a time for Bennett, who is observant and does not travel on Shabbat or festival days, to give an address to the UN General Assembly. In the end, he spoke on Monday morning, about nine hours before Shmini Atzeret began.

Unlike on his recent trip to Washington, when delays meant he and the entire delegation with him had to unexpectedly remain in the city over Shabbat, the UN trip was planned to include the festival.

Bennett stayed in a hotel within close walking distance of several synagogues, including many that are Orthodox, as he is. But there was no question that, security permitting, KJ would be his shul of choice.

Speaking to journalists on his delegation hours before he attended services, Bennett spoke of his five years living on Manhattan’s Upper East Side when he was the CEO of an Israeli-American cybersecurity start-up.

“I love New York a lot,” he effused, waxing poetic about taking the bus down Fifth Avenue. 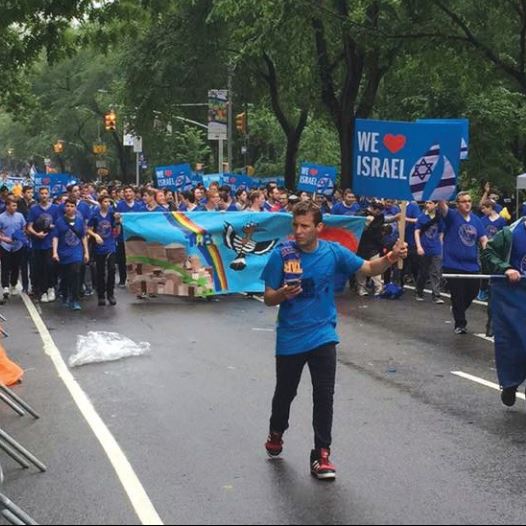 Bennett recalled: “Gilat, my wife, was from a secular family in Israel, and I tried to bring her to shul there, but she didn’t like it. When we came to New York in 1999, 2000, we walked on the street one Saturday and saw a sign saying that if you’re bored in shul, you should try the ‘beginners’ minyan.’”

Gilat was intrigued, and the free food was an added bonus, he said. The Bennetts started attending every week, and Gilat started to embrace Jewish tradition.

Bennett retold that story at KJ later, according to a source in the sanctuary.

Bennett was the third Israeli prime minister to attend Kehilath Jeshurun; the first was Menachem Begin on Tisha Be’av and the second was Benjamin Netanyahu in 1996. President Isaac Herzog is a Ramaz graduate, and his family went to KJ when he was a teen and his father, Chaim Herzog, was ambassador to the UN.

Journalists weren’t allowed into the synagogue; members had to preregister and arrive early, and the prime minister’s staff mysteriously forgot to tell us those conditions. But every good reporter has sources, and a good Ramaz graduate has eyes and ears in KJ.

Bennett also repeated a message he relayed at an event hosted by the Jewish Federations of North America (JFNA) earlier that day – that Israeli Jews have much to learn from Americans when it comes to being open and accepting.

US Jews don’t “define people and put them in a box,” Bennett said, speaking from his experience. “In Israel, we have secular, National-Religious, haredi, but if you’re just three centimeters off [from the norm], you can’t go to my shul.”

In the US, however, “you’re just a Jew, and you’re welcome; whether you’re haredi, Reform, Orthodox, Modern Orthodox, you are welcome. And that’s something that we need to import,” he said.

This reporter was not the only person who rolled her eyes a bit at that, having experienced being National-Religious/Modern Orthodox and “three centimeters off” in different ways in each country. But Gilat Bennett was lucky to have stumbled upon the KJ-Ramaz community, which is very welcoming to various levels of observance.

Bennett also spoke of how deep divisions between the Jewish people had led to the destruction of the two Temples and their exile from the Land of Israel, and how his unity government wants to keep the third chance at Jewish sovereignty from unraveling from the inside – as he said earlier at the JFNA event.

KJ’s Senior Rabbi Chaim Steinmetz recited the blessing upon encountering a king. At Bennett's request, the congregation recited the Prayer for the State of Israel, which is usually said in the morning. Then, they sang “Hatikvah,” the source at synagogue said.

After two children recited the Yigdal prayer, closing the service, Bennett called them over and shook their hands and spoke with them briefly. The source in the synagogue found that gesture especially moving and authentic, pointing out that there were no media present.

At the same time, in another part of the Upper East Side, in the Park East Synagogue, Rabbi Benjamin Goldschmidt finished his sermon by telling the congregation about hearing Bennett at the JFNA event.

Goldschmidt spoke of how moving he found it to see and hear a kippah-clad Israeli prime minister talking about the Jewish people’s connection to the Torah and to Israel.

Then, Bennett walked over a mile, taking the more scenic route down Fifth Avenue to his hotel, security in tow and kippah on his head, in order to observe the festival.