Despite bitter end, Blatt’s transition from Israel to NBA an overall success

"I’m appreciative to everyone that was part of this," said Blatt. 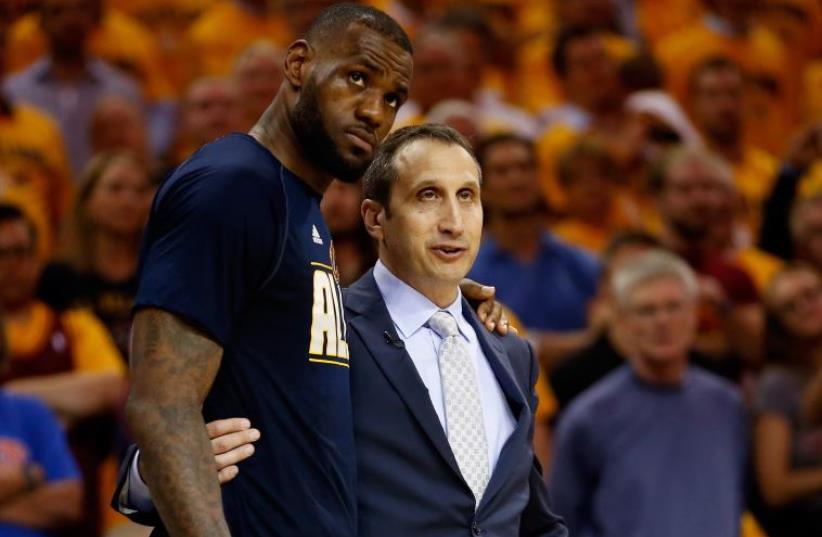 LeBron James #23 of the Cleveland Cavaliers and head coach David Blatt.
(photo credit: GREGORY SHAMUS / GETTY IMAGES NORTH AMERICA / AFP)
Advertisement
David Blatt’s roller-coaster season came to a close with a defeat on Tuesday night, but the positives far outweighed the negatives for the Cleveland Cavaliers coach.Golden State Warriors completed a 4-2 win in the Finals in Cleveland, ultimately overpowering the shorthanded Cavs. However, after opening 2014/15 with a 19-20 record, and with Blatt’s job reportedly in jeopardy, Cleveland turned its season around, storming to the Eastern Conference title despite losing All-Star Kevin Love in the first round of the playoffs, and giving the Warriors a run for their money even after All-Star Kyrie Irving went down in Game 1 of the Finals.“It’s tough, tough to lose. Not every story has a happy ending. It doesn’t mean it’s a bad story. This was not. This was a good story.And I’m appreciative to everyone that was part of this,” said Blatt.“This is a process. You don’t wake up one morning and fall out of bed and expect to win the NBA Championship. You hope that you can, but it doesn’t always work that way, and our guys did more than anyone could expect to put themselves and put our organization in this situation.”Blatt wouldn’t use the absence of Love and Irving as an excuse.“Obviously we would have loved to have come into the series as a whole team. I feel badly for Kevin and for Kyrie because they did so much during the course of the season to help us get here,” he said.“We’re not here without either one of those guys, and obviously having had them in this series would have been significant.“But we never asked for sympathy when they went down.We never made an excuse, and I certainly won’t do that now. We played our hearts out. The Warriors were better. Those guys will get healthy, and we’ll come back after it next season.”Blatt also spoke of his relationship with LeBron James, which at times, including on Tuesday, seemed frigid at best.“It was a challenging, but oh so rewarding and beneficial, chance that I was given to work with the best player in the world, and he competed for us,” said Blatt. “He led the team, and he made every attempt to make this work. And I give him a lot of credit for that. It would have been easy to do otherwise, but he did not. He was a great, great assistance to me in many, many ways. And it’s an honor to coach him.”Blatt has a contract for two more seasons, but despite leading the team to the Finals, speculation is rife regarding his future with the Cavs due to his differences with James.“I was challenged to make the adjustment to a different kind of game, almost to a different world, the world of the NBA, which is unlike any other situation that I’ve been involved in,” the Israeli-American explained.“It was like stepping into a new world and having to learn and make your way every single day. But I was blessed with a lot of great players and a lot of opportunity to find my way.And we were in the NBA Finals, two games away from winning it. I think we did pretty well.”In his comments to the Israeli media in Hebrew, Blatt spoke about having to constantly prove himself in the NBA.“I always knew I would coach in the NBA, but it would have been slightly pretentious of me to say I believed I would be coaching LeBron James in my first season and that we’d reach the Finals,” said Blatt.“As a coach, your future is never secure. You have to prove yourself every day. That is the challenge of being a coach. Everyone likes to talk like coaches and criticize coaches, but not everyone can be a coach because it isn’t an easy job.”