With support from the Welfare Ministry, Mifalot runs 200 teams for the disabled population and integrates disabled and non-disabled players. 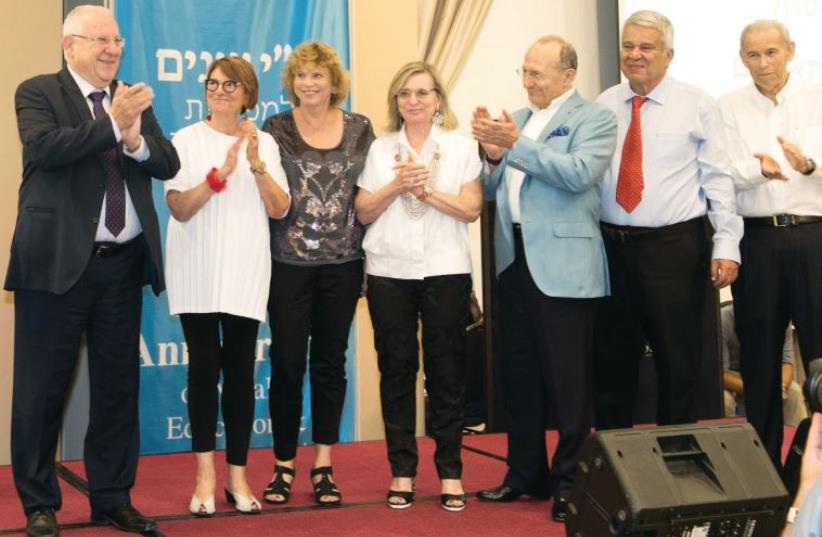 PRESIDENT REUVEN RIVLIN and the Mifalot founders.
(photo credit: SHOKO)
Advertisement
Children with special needs are often sidelined in life, and especially in sports. The Israeli nonprofit Mifalot: Sport for Education, Development and Peace trains soccer coaches in Israel – and in developing countries, too – how this very popular sport can be a tool to enhance social inclusion and other values.Mifalot’s “Game of Life” program uses sports to promote self-confidence, trust and mutual engagement, and football in particular as a therapeutic mode of education for youth with physical and mental disabilities.“We put an emphasis on tolerance, on getting to know the ‘other.’ A kid with physical disabilities can be seen as weird or scary but once you play together you see it doesn’t matter,” says Keren Lavi, international development manager of Mifalot.Since 2007, Mifalot has trained coaches in 15 countries, such as Colombia, Myanmar, India, Nepal, Cameroon, Liberia, Ghana and the Philippines.In 2016 it partnered with MASHAV , the Israeli Foreign Ministry’s Agency for Development Cooperation.Coaches in Ghana learned the Israeli method of social inclusion through sports. Photo courtesy of Mifalot “This is a program that’s trying to change mindsets about people with special needs, teaching that they can be useful in society. That’s a new idea in many countries,” says Adam Levene from MASHAV ’s department of policy and international relations. “We’ve done three training sessions with Mifalot and are looking to do 10 more in the near future.”Each overseas training camp is tailored in partnership with a local organization. Usually, 40 or 50 coaches participate in the weeklong camp, which includes opportunities to practice what they’ve learned with local children.Mifalot workshops do not always focus on special-needs children. Sometimes the emphasis is how to use sports to educate about peace-building or empowering women, protecting children or preventing drug or alcohol abuse among at-risk youth.“For example, we heard that 70 percent of women in Liberia have been sexually abused,” says Lavi. “We want them to think about what they want for their future. If the coaches raise these issues with the kids they coach, they can create a safe environment to talk about these issues outside of school. The coach becomes not only a sports facilitator but also an educator. It’s beautiful to see it happen.”Mifalot returns to each country a few times to follow up on the initial training.Mifalot was founded in 1997 by former Hapoel Tel Aviv football club owners Moshik Teomim, Sami Segol and Moti Orenstein as a social enterprise to use soccer as an educational motivator. Over the years, this model evolved to an emphasis on social values.“We reach 100,000 beneficiaries a year. We work with hundreds of teams and coaches in almost every Israeli city and village, as well as the Palestinian Authority and Jordan, all year long,” says Lavi.“Our goal is that 50% of beneficiaries are not Jewish so we work with everyone – Bedouins, Druze, Muslims, Circassians and Christians.”With support from the Welfare Ministry, Mifalot runs 200 teams for the disabled population and integrates disabled and non-disabled players.About 10 years ago, after winning several international awards, Mifalot started to receive requests from abroad.“In 2007, we started to export our program through different partners and donors. The first time was in Cameroon,” says Lavi.“We build activities that could have an impact overseas and also help strengthen their base in Israel because those who volunteer abroad come back and work in Israel,” says Levene.for more information, please visit www.mifalot.com www.israel21c.org