The state informs High Court in writing that it would, “above and beyond the requirements of the law,” agree to compensate the owners of adjacent homes which are damaged by the demolitions. 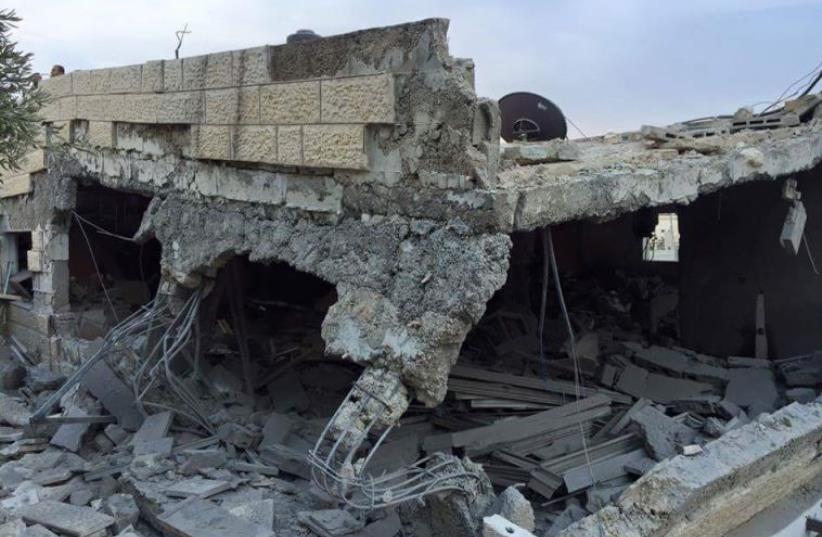 A terrorist's home said to be demolished by the IDF on October 6, 2015
(photo credit: PALESTINIAN MEDIA)
Advertisement
The state pressed the High Court of Justice on Monday to approve the demolitions of six family homes of the terrorists who murdered Malahi Rosenfeld, Danny Gonen and Eitam and Naama Henkin.On October 22, the High Court temporarily froze the demolition orders, ordering the state to explain its reasons and plans for the demolitions in more detail.For the first time, the state also on Monday informed the High Court that it would, “above and beyond the requirements of the law,” agree to compensate the owners of adjacent homes which may be damaged by the demolitions.On October 9, the B’Tselem human rights group complained that the IDF and the state were not addressing the issue of damaging adjacent houses during demolition.The issue was raised by Hamoked and the justices themselves as part of Hamoked’s petition against the demolitions.The state said it would compensate families who bring evidence of damage, if the damage is not caused by their interfering with the demolition and if the Palestinian Authority is not already compensating them.The court had asked the state to summarize all prior demolitions that had been at least temporarily halted by court order since 2013, and the state provided a list of 10 examples. In all of the cases, the demolitions were eventually allowed to go forward.In its legal brief Monday, the state told the court that the basis and timing of the demolitions relate to a variety of foreign policy, manpower, security, and deterrence of terrorism considerations.It added that the requirement that the families living at the residences have a connection to or knowledge of the terrorist attacks was fulfilled in all cases.Further, the state said that demolition is the right option in all of the six cases under present review, rejecting the alternatives of demolition of only certain rooms or the mere sealing-off of the residences.Last week, after the High Court froze the orders, Prime Minister Benjamin Netanyahu said that destroying the homes of the families of terrorists is one of the most effective tools to deter suicide attackers and he hopes that the High Court will come to a decision on the matter swiftly.“Our problem is the disconnect between the act and the consequences of the act,” Netanyahu said. “Therefore, we want to minimize the time and I hope that the High Court will make its decision as quickly as possible.”He added that, “If they decide, and usually they decide yes to demolish, it’s better to do so close to the incident, within a number of days rather than weeks or months.”Two weeks ago, the cabinet’s decision to expedite terrorist home demolitions got under way. Security forces arrived at the homes of the terrorist cell members who carried out the attack in which the Henkins were killed during the Succot holiday, informing them that their homes would be destroyed in 24 hours. The announcement gave the families the opportunity to petition to the High Court against the demolition.Jerusalem Post staff contributed to this report.