Transportation Ministry says it's up to Public Security Ministry Gilad Erdan to ensure that police are operationally prepared to deal with expected gridlock. 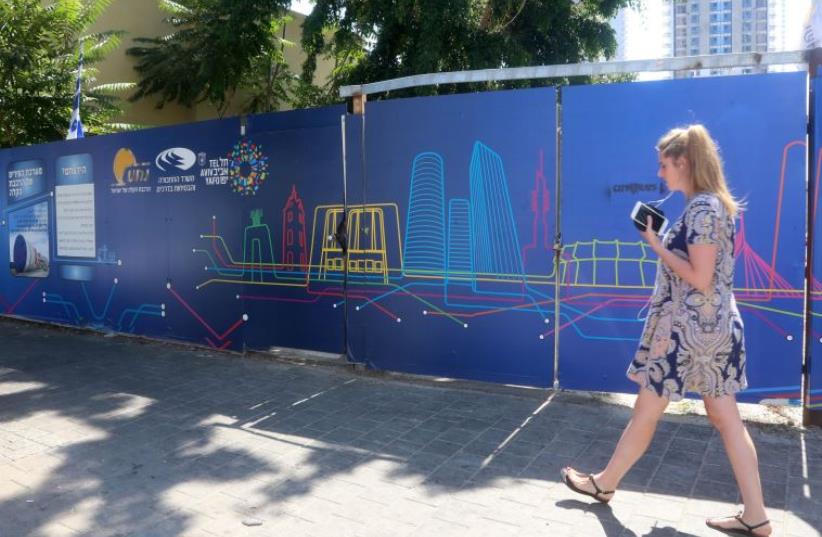 A woman walks in front of a sign advertising the Tel Aviv Light Rail
(photo credit: MARC ISRAEL SELLEM/THE JERUSALEM POST)
Advertisement
Construction on the Tel Aviv Light Rail will begin next month as planned, the Transportation Ministry said on Tuesday.This comes despite concern in the Public Security Ministry, Israel Police and others, that the city’s infrastructure and law enforcement are not prepared to deal with the extreme congestion expected in and around Tel Aviv once the project begins in earnest.The Transportation Ministry said it is up to Public Security Minister Gilad Erdan to ensure that police are prepared operationally to deal with the expected gridlock. Transportation Minister Israel Katz vowed that he would not allow the project to be delayed, despite concerns.Also on Tuesday, State Comptroller Joseph Shapira announced that his office will begin examining the readiness of authorities to deal with the construction and traffic headaches.Officials from the Public Security Ministry, the police and the municipality held a meeting for over three hours on Tuesday to discuss how to deal with the launch of the construction within Tel Aviv. No conclusions were announced at the time; however, they “came to some understandings.”They are expected to decide on either severely limiting the number of streets where construction will take place at first, or delaying the launch for three months to allow for the construction of park-and-ride lots outside of the city.There are only three out of 36 park-and-ride lots built outside Tel Aviv to handle commuter traffic, one of which is in Modi’in.The meeting examined how the project would deal with security issues, such as terrorist attacks during construction, and how emergency services would be able to move within the city. It was not attended by any representatives from the Transportation Ministry or NTA Metropolitan Mass Transit System Ltd., the firm responsible for the construction.Officials from the Public Security Ministry said it is most likely that police will decide to limit the number of streets where construction will begin on August 2, but nonetheless those sites will include major arteries like Carlebach Street in Tel Aviv, Abba Hillel Street in Ramat Gan and the junction of Allenby and Yehuda Halevi streets, one of the busiest intersections in central Tel Aviv.Officials from the ministry – which is responsible for the Israel Police – expressed misgivings about what they said was the failure to open a sufficient number of public transport lanes on the city’s streets to service commuters parking outside the city to avoid the gridlock.In addition, while an agreement has been reached that a further 168 policemen are to be deployed to handle the traffic; no tender was supplied for the extra officers until Tuesday, and only after moving 124 personnel from other deployments to work the light rail construction gridlock.The system’s initial Red Line is supposed to run from Petah Tikva to Bat Yam, with sections of the route underground. Construction on the line is expected to begin next month and it’s to take until at least 2021 to complete.The construction of the light rail line is expected to cause serious congestion not only in Tel Aviv but in circles spreading out as far as Netanya to the north and Ashdod to the south and east to Modi’in, as major arteries into the city are closed for the construction.