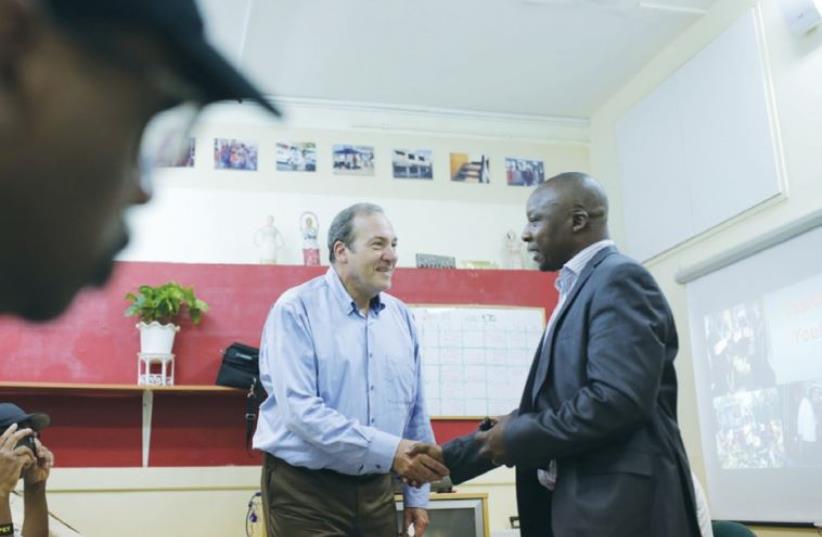 IFCJ President Rabbi Yechiel Eckstein (left) speaks with Pastor Jeremiah Sunday Dairo in south Tel Aviv
(photo credit: DANIEL BAR-ON / IFCJ)
Advertisement
A delegation of representatives from the largest Pentecostal denomination in the U.S. left Israel on Tuesday after an eight-day visit to Israel which included visits to churches and organizations helping African asylum-seekers in Tel Aviv, meetings with Israeli soldiers from Ethiopian families and visits to other charitable initiatives.The 20 senior pastors of the Church of God in Christ (COGIC), with has some 5 million adherents in the US, were hosted by the International Fellowship of Christians and Jews as part of the latter’s efforts to bolster international support for Israel.Earlier this week, the group went to southern Tel Aviv, where many thousands of African asylum-seekers have lived since the influx of Africans into Israel began in the mid-2000s.Approximately 45,000 African asylum-seekers reside in Israel.The community suffers from a variety of problems, including poverty, homelessness, health concerns and a lack of educational facilities for its children.The pastors from COGIC visited the headquarters of the Mesila – Aid and Information Center for Foreign Workers and Refugees organization in south Tel Aviv, which provides undocumented Africans with social services, in order to gain an understanding of the situation and to distribute backpacks and school supplies for children who started the school year on Tuesday.The group also met with Pastor Jeremiah Sunday Dairo, a Christian minister who is active in providing assistance to the needy from the community.Dairo started his “Lift Up Your Head” ministry in order to provide African Christians with somewhere to pray, but for the last eight years has opened up the doors of his church to allow homeless men to sleep there as well.Some 45 to 50 men sleep in the church every night on sofas and makeshift beds and leave in the morning to allow the normal functioning of the ministry to continue. Dairo estimates that between 8,000 and 9,000 men have slept in the church since 2007.“The times are getting tougher and tougher, they are people who come from very vulnerable countries, they have nothing, some are also sick but they can’t afford to go to hospital,” he said.Many Africans sleep outside on the streets or in nearby Lewinsky Park, something which becomes much harder in the winter, he said.Last week, hundreds of African asylum-seekers were released from the Holot detention facility near Sinai where they were being held. They were forbidden to go to Tel Aviv or Eilat, where the two largest concentrations of the community in the country are located.Dairo says that in the last few days he had to turn away some of those people who turned up at his church.The pastor said that he understood that Israel has its own priorities, and welcomed help from the Tel Aviv Municipality in providing some health care for those in need of it, but said that other basic requirements needed to be dealt with.“Israel has its own issues and it is first and foremost a Jewish nation which everybody knows,” he said. “But this situation has arisen in which some of these people have no other place to go. The fact is that they are here, the State of Israel can do more for their education. If they can learn and advance themselves then they can really stand out and contribute to Israeli society if they’re given the chance.”The COGIC pastors also toured Christian sites in northern Israel and the capital and held meetings with several officials including Jerusalem Mayor Nir Barkat and Kulanu MK Michael Oren.“We are honored to host our friends in the church as they experience the beauty and power of the Holy Land,” said Rabbi Yechiel Eckstein, founder and president of the IFCJ. “At a time when Israel faces critical threats from Iran to Islamic terror, the pastors remind us that the Jewish people and the State of Israel do not stand alone.”